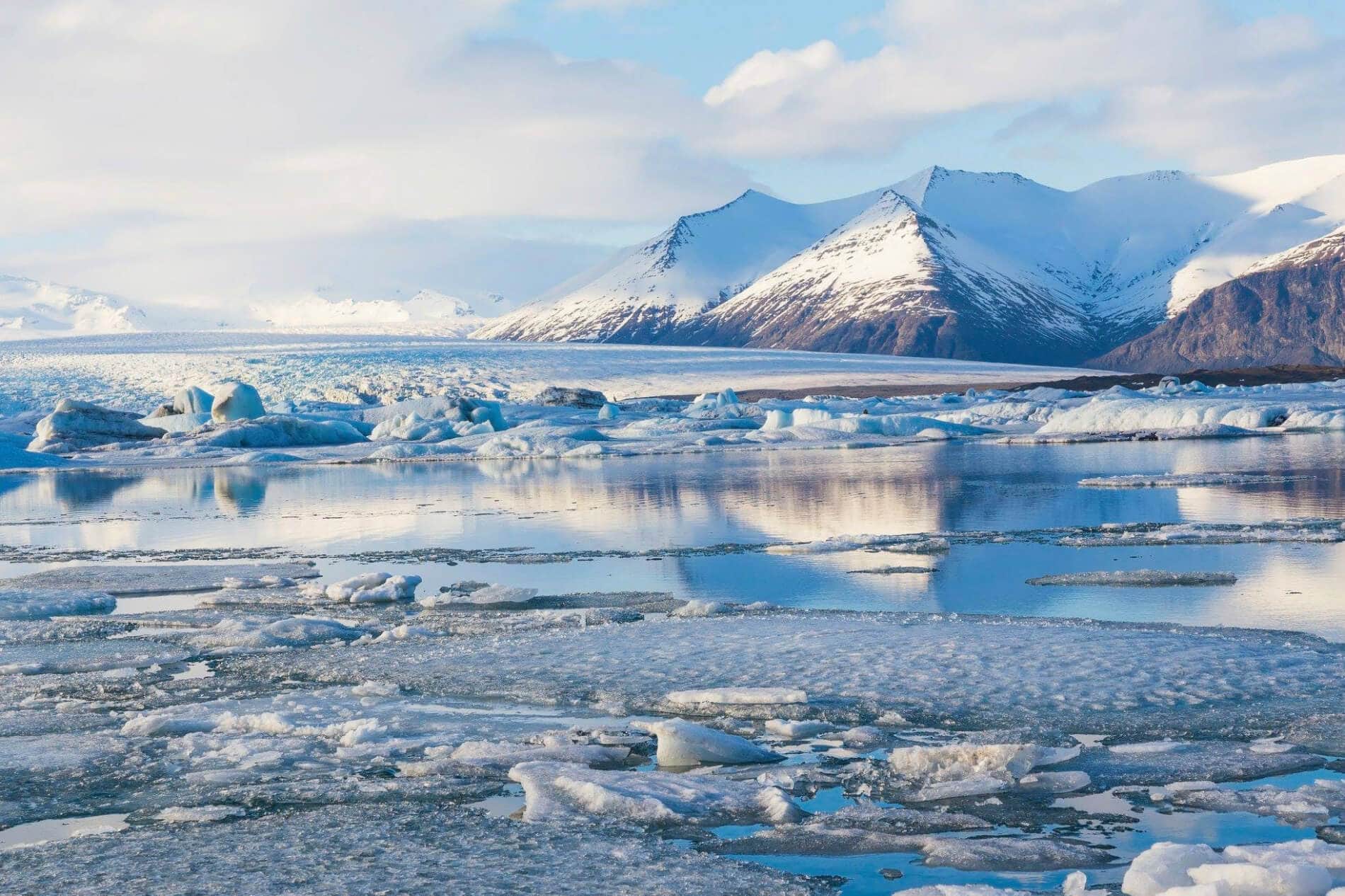 Indigenous leaders call climate change an urgent threat that requires a global response (an idea that was trashed by the Trump administration)
Arctic marine waters are experiencing widespread and rapid acidification. This can have varying effects on Arctic marine dwellers, but one of the most staggering finding is that ocean acidification greatly increases the risk of Barents Sea cod fisheries collapse. Photo: Arctic Council.
Support our journalism. Become a Patron!

This is why the Arctic matters to us all: The Arctic is warming faster than the rest of the planet, showing temperature increases twice as large as global averages.

“Sea ice, snow cover, glaciers and permafrost are all diminishing due to Arctic warming. Vulnerable ecosystems in the Arctic are under threat,” reports the Arctic Council. “Climate change causes rapidly changing living conditions for 4 million Arctic inhabitants. Hunting, fishing and herding activities are threatened by changes in snow and ice conditions. Traditional livelihoods of Indigenous Peoples in the Arctic are at risk.”

So Arctic governments, including Indigenous representatives, have been using the tool of consensus in order to meet that challenge. The Arctic Council includes eight Arctic nations: Canada, the Kingdom of Denmark (including Greenland and the Faroe Islands), Finland, Iceland, Norway, Russian Federation, Sweden, and the U.S. In addition, it’s the only member-state organization that includes six Indigenous permanent members representing the Aleut, Inuit, Athabaskan, Gwich’in, Sami, and Russian Indigenous Peoples of the North.

“Combating climate change is an urgent common challenge for the international community and requires immediate global action,” the Arctic Council members said in unified statements of one kind or another for more than a decade.

At the ministerial meeting in Rovaniemi, Finland, Secretary of State Michael R. Pompeo refused to use the words “climate change” in any joint statement. 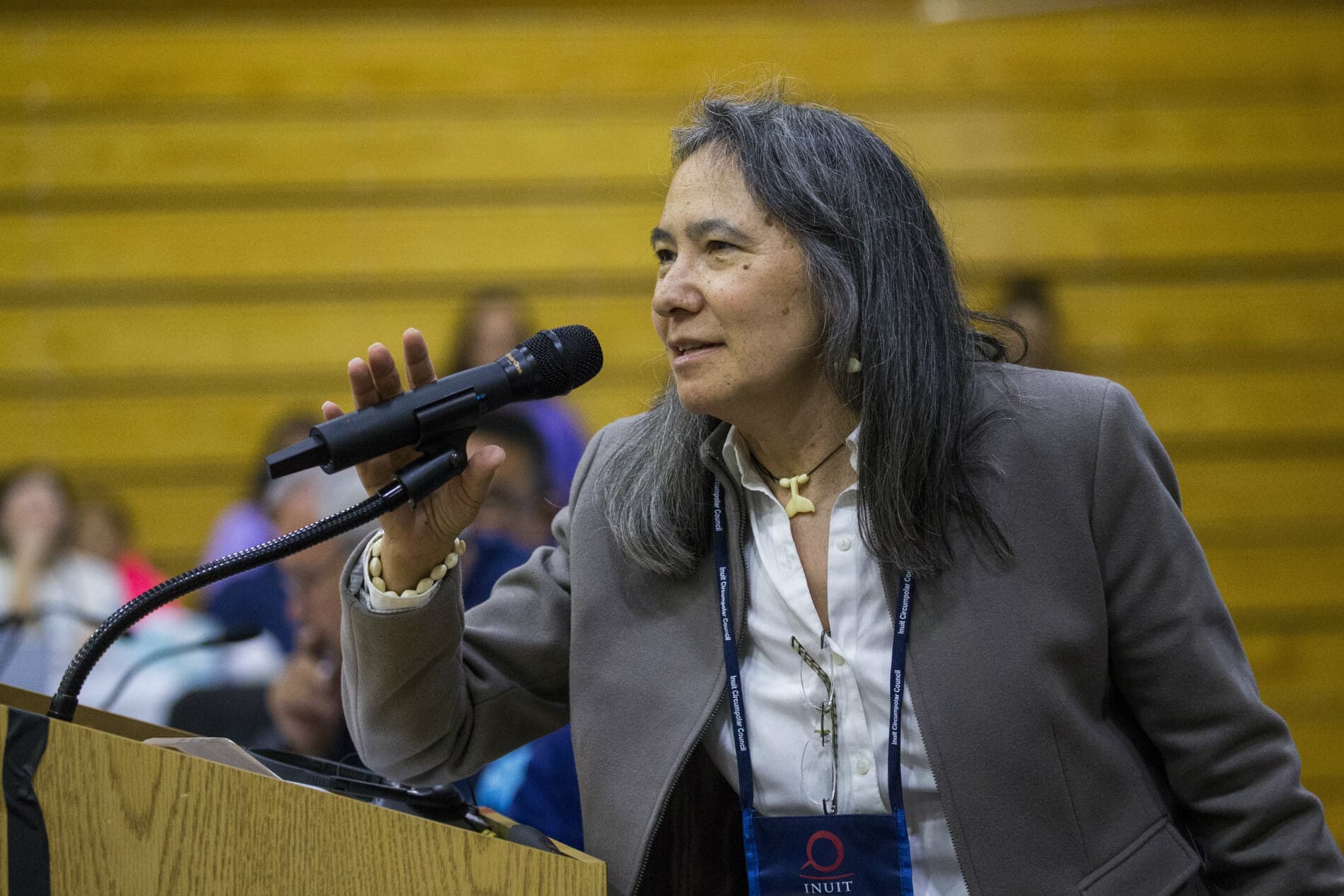 “Refusing to allow the words ‘climate change’ into the declaration is a moral failure,” said Dalee Sambo Dorough. She is International Chair of the Inuit Circumpolar Council, which represents 165,000 Inuit in Greenland, Canada, Alaska and Chukotka, Russia.

“This is the first time the Arctic Council has failed to issue a declaration at the end of a two-year chairmanship, and it’s a serious blow to the future of what is supposed to be a consensus based body,” Sambo Dorough said in a news release. “Inuit are feeling the effects of climate change everyday. While the US government concerns itself with semantics, playing games with words, our people are witnessing the adverse impacts of climate change. What about us and our reality?” 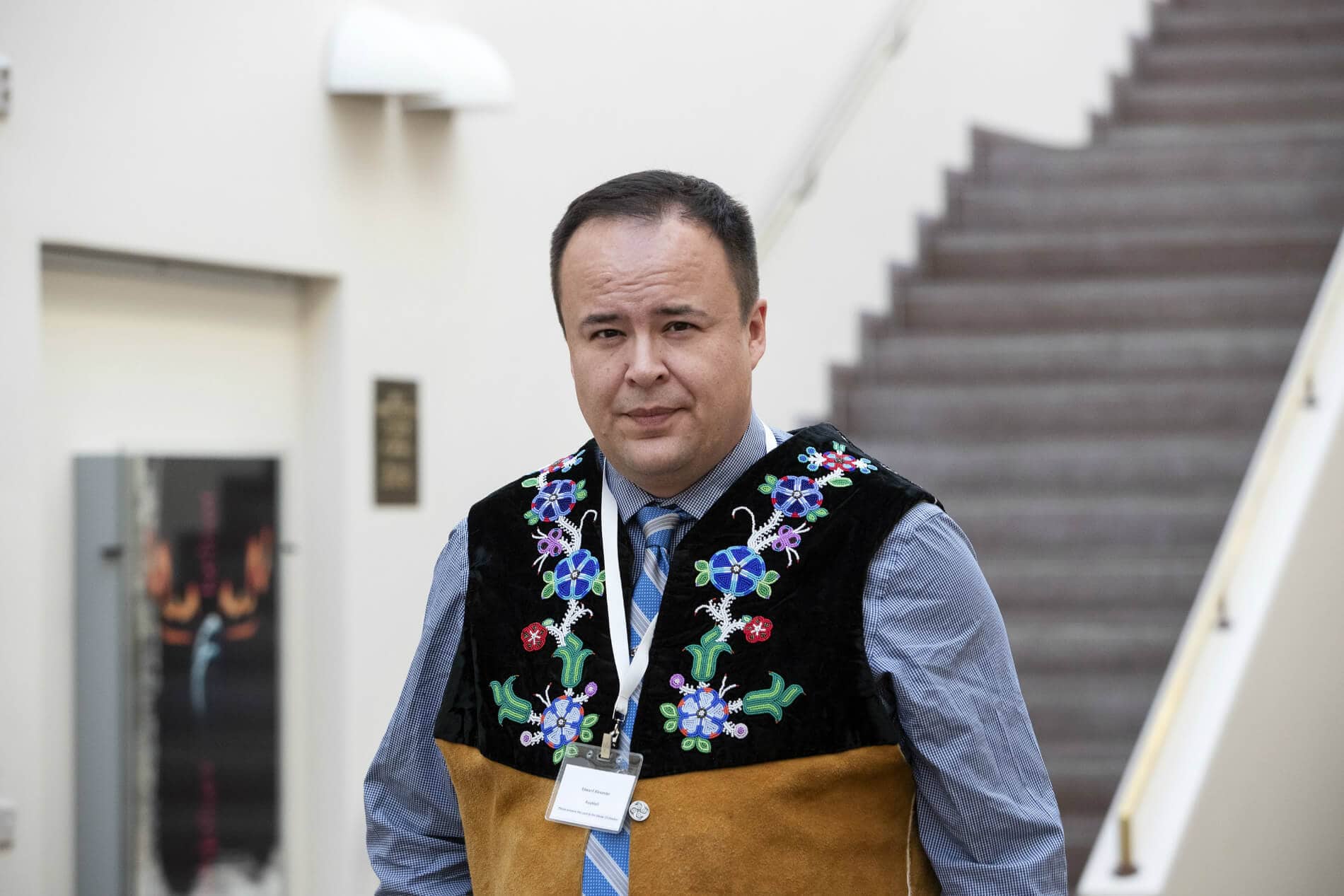 Edward Alexander, co-chair of Gwich’in Council International and the head of delegation, told Indian Country Today that the way the United States reached this outcome was particularly troubling. He said the language had been “already largely agreed upon, and the substance of which was worked through dozens of Arctic Council Working Group projects. There was ample time for the United States to express its sentiments, and to work towards consensus over the last two years of the Finnish Chairmanship. Instead the US chose to vacate its leadership role and it’s not entirely clear why.”

“Consensus was achieved in approving the Senior Arctic Officials’ Report which details the projects of the working groups, many of the projects are based in the terms found objectionable by the US, like black carbon, climate change, etc.,” Alexander said. “So, the US withheld consensus on the declaration which would have recognized projects it had already approved, recognized that they occurred, and instead, inexplicably alienated nations around the circumpolar north for essentially no reason by refusing to sign a declaration on these important issues.”

Instead Arctic Council ministers agreed to release a seven-paragraph joint statement that avoided mentioning any of the threats and challenges faced in the Arctic.

However, a statement from Finnish Foreign Minister Timo Soini, the chair of the Arctic Council, said in a press conference following the meeting that “the declaration in a traditional way wasn’t possible this time.” He also added that “a majority of us regarded climate change as a fundamental challenge facing the Arctic,” adding there is an “urgent need” to deal with it.

The U.S. State Department disagrees.”I’s not accurate to say that the US wouldn’t support a joint declaration,” a senior official told CNN. “There were several different versions of the declaration going around. The US was ready to sign. Secretary Pompeo made it very clear that there was a version of the declaration – all of these were being compared and in the middle of that at the ministers dinner, a conversation originated organically about doing a joint statement instead — doing a simpler, positive, unified, collective message,” they said.

The senior officials said that “just because you don’t have a certain phrase in it you can’t infer that the United States has taken some sort of position (that) it’s anti-environment.”

But that spin is not what other governments and Indigenous representatives heard. And this is the first time the United States, or any member state, has not been a partner in a consensus declaration.

“This position was taken by the US Administration despite the fact that the 2017 Fairbanks Declaration at the end of the US Chairmanship clearly cited the effects of climate change in the Arctic and ‘the need for action at all levels,’” said Monica Ell-Kanayuk, President of Inuit Circumpolar Conference Canada. “It’s unfortunate there’s no declaration but at least the Chair’s statement recognizes the urgency of dealing with climate change.”

“Despite previous statements out of the US Administration that climate change is a ‘hoax’ perpetuated by China, Inuit see the reality of climate change every day,” said James Stotts, president of Inuit Circumpolar Conference Alaska. “And the reality is our communities are struggling for survival.”

“We are worried about the undermining of the Arctic Council’s credibility at a time when genuine leadership and a strong Arctic voice is needed,” said Hjalmar Dahl, president of Inuit Circumpolar Conference Greenland.

“This is not just a question of words – it’s about the long-term survival of our culture and communities,”said Liubov Taian, president of Iniut Circumpolar Conference Russia. “Our traditional Inuit territory covers 40 percent of the Arctic region and it is essential that governments work with us to deal with the threat of climate change throughoutInuit Nunaat, our Arctic homeland.”

Åsa Larsson Blind, president of the Saami Council, said at the ministerial conference that Indigenous people have a story to tell about best practices.

“Cooperation and co-management between Indigenous peoples and states as equal partners is indeed the best chance we have for an Arctic with high bio -and cultural diversity, a prosperous Arctic for all,” she said. 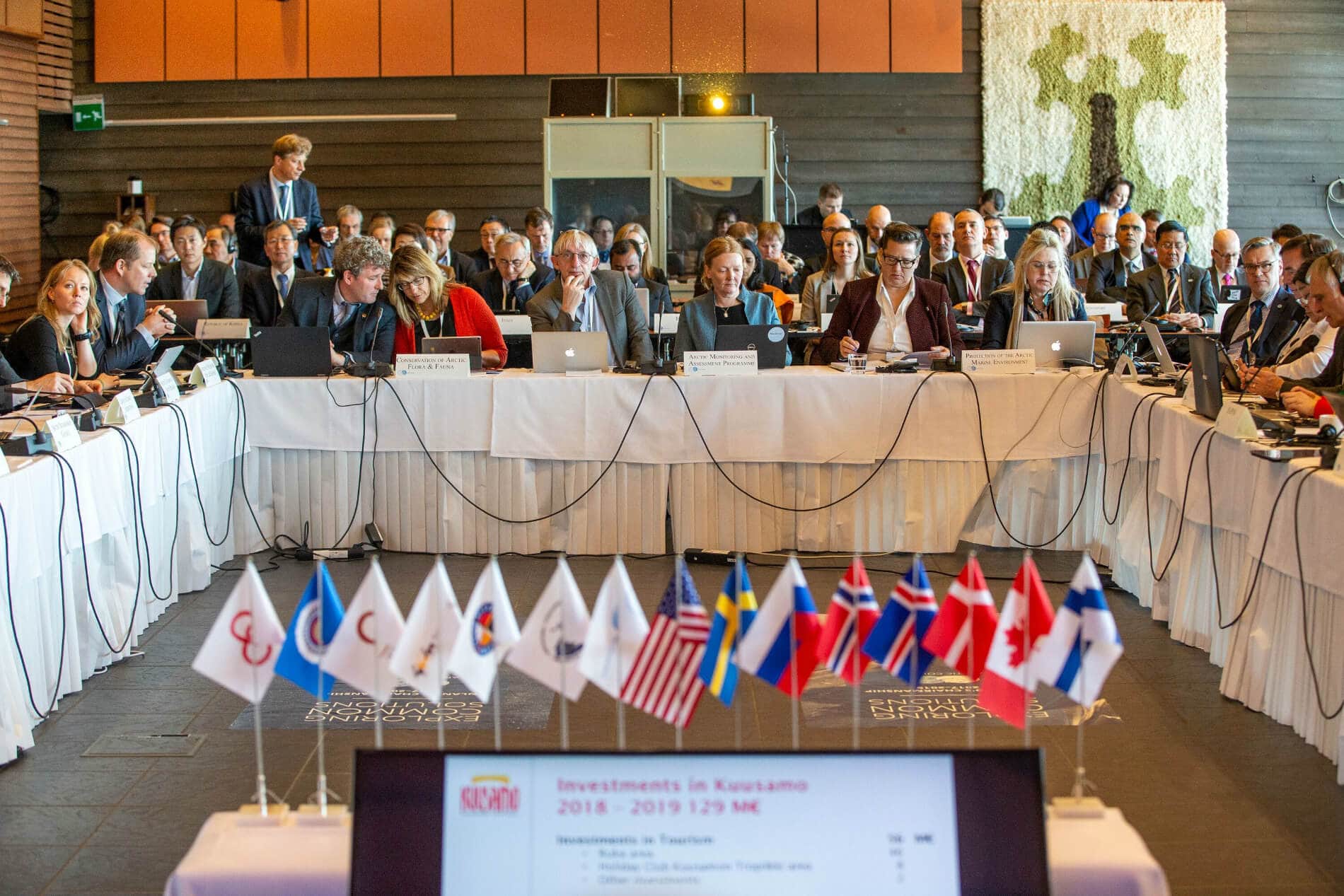 Climate change is not the only issue Indigenous face in the Arctic.

During the Arctic Council ministerial meeting, the Inuit Circumpolar Conference called on governments to “address some of the issues important to us: wildlife management and food security; the infrastructure and social services deficit; physical and environmental health issues, including the horror of suicide; and culture and language protection.”

Stotts said the Arctic’s Indigenous communities should be listened to, both to address the problems facing the region and people as well as potential solutions. “Now is the time for a unified response to the threat posed by climate change and its compounding spinoff effects, Stotts said.

Alexander said he was particularly troubled by Pompeo’s speech and the potential of a military build up in the region. “I grew up in the north during the Cold War, in a community that hosted a Distant Early Warning facility, large towers peering over the horizon of taiga for a nuclear holocaust that thankfully never arrived,” he said. “Let me be clear: we must not replace our melting sea ice with another unnecessary Cold War in a place of peace and stability. I too learned to peer over the horizon for the threat of war. We must not accept a Cold War 2.0, this version with America erecting an iron curtain on its southern border and projecting aggression in the north.”

He said he supports the idea of defense, “but we shouldn’t be issuing statements like Sec. Pompeo’s attacking the sovereignty of our allies’ territorial integrity, like happened with Canada’s northwest passage. I am sure the gift of those remarks won’t be forgotten by China or Russia moving forward, and we’ll no doubt, and ironically, be fed them in the future.”

Instead, Alexander said, “We need a more just, peaceful world, one that is achievable with consensus driven discussions and the critical participation of Indigenous peoples. “

And global warming is the security issue, Alexander said. “The challenge of global warming, ocean acidification, and the warming of the Arctic, are the greatest existential threat to the future of humankind.”

“Gwich’in, as owners and stewards of a great deal of land in the north, know that climate change also threatens the existence of the flora and fauna around the globe. Gwich’in have called upon the world repeatedly to meet this threat with solutions and peaceful cooperation built upon mutual respect,” he said. “We have consistently challenged the nations of the world to address these threats immediately. And we have taken substantial action on our own to meet the challenges in our way: using local renewable timber resources for housing, solar projects in our remote fly-in communities north of the Arctic Circle, and in projects brought through the Arctic Council, among many other examples.

“We spoke frankly in the ministerial about the threat to the Porcupine Caribou Herd and called directly on the US to stop lease sales in the Arctic Refuge, the heart of biodiversity in the circumpolar north. We spoke frankly to Sec. of State Pompeo one on one about these issues and about the issue of the free movement of Gwich’in across our traditional territories and the need for Canada to ratify the Jay Treaty and allow us economic and social mobility in line with our rights as indigenous people under the United Nations Declaration on the Rights of Indigenous Peoples. We spoke of the Jay Treaty to remind America that at the very beginning of the special relationship with Great Britain, that good faith arbitration to solve international conflict was coined, and in the middle of that document our Indigenous rights to freely travel and live our ways of life were front and center. “

Alexander said: “Our people will be heard on issues of importance in our own lands, in Canada and in America. Native Americans have always had a keen sense of the forgotten history of America, from Crispus Attucks onward to Code Talkers. Never has America had greater need for good leadership than now … Only by working together in a good way will our children and grandchildren, our peoples and nations, survive the crisis of climate change and global warming.”

Mark Trahant is editor of Indian Country Today. He is a member of the Shoshone-Bannock Tribes. Follow him on Twitter – @TrahantReports

This article was originally published at Indian Country Today. It has been re-published at IC with permission.