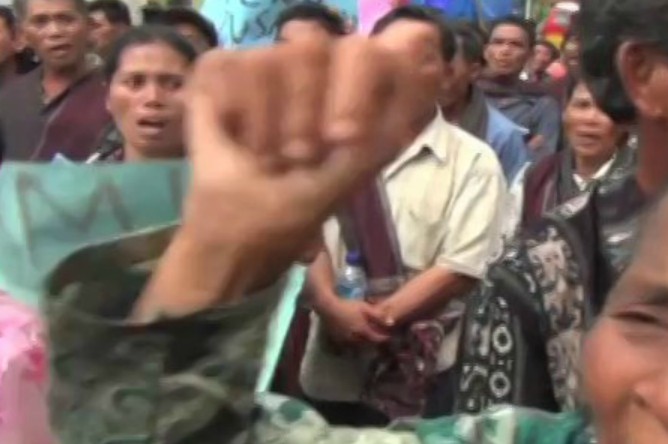 Earlier this week, hundreds of Indigenous villagers from Sipituhuta and Pandumaan communities in North Sumatra risked life and limb by standing between their forest home and the logging machinery of PT Toba Pulp Lestari (TPL), a company affiliated with paper giant APRIL (Asia Pacific Resources International Holdings Limited). In response, Indonesia’s notoriously abusive security agency, known as Brimob, was called in to forcibly suppress the protest. At least 16 village members have now been arrested in connection to this latest dispute.

This case has been simmering since 2009, when the APRIL affiliate began deforesting the community’s territory and planting eucalyptus plantations on their ancestral land.

In September, APRIL workers and security forces again began to clear forest on the community’s land. The community gathered in large numbers to stop the machinery, confiscating weapons and chainsaws from the logging crew. Three days later, eight villagers were summoned to the police station. Instead, nearly 1,000 community members arrived in solidarity.

This land conflict is just one example of the widespread human rights violations that have plagued APRIL’s operations for many years. It is past time for APRIL to make respecting the rights of local communities its new business-as-usual. Please write to CEO Sukanto Tanoto today and ask APRIL to release the Indigenous villagers still being held, to peacefully resolve this conflict, and to return the community lands it has stolen.