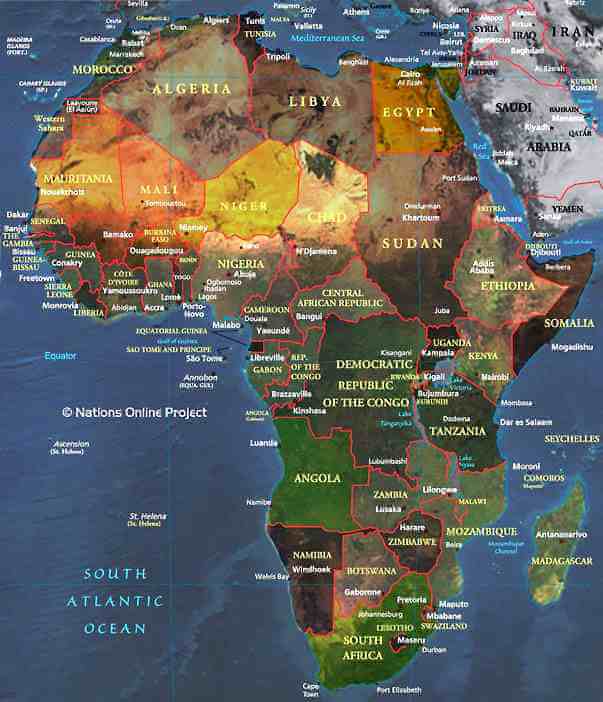 From Zmag. Africa does not need more Western philanthropy, by Mukoma Ngugi. (April 21, 2007)

Keep this question in mind: What good would it have done the world if Idi Amin had saved a drowning African child?

In addition to providing raw materials, labor, and markets for finished products, Africa also cleanses the conscience of Africanist scholars, evangelists and missionaries, the rock and roll musicians who want to save Africa through orphan adoption, and philanthropists with Mother-Theresa complexes.

But at the top of the pack – Western politicians. Occupy Iraq and Afghanistan but do not forget to rescue the African from the clutches of war-lords, poverty, corruption, and disease. Africa has become the continent where the guilt-ridden come to score quick moral points. And we let them.

The reality behind the hype of saving Africa tells a different story. When Tony Blair intervened in Sierra Leone, it was heralded as an emblem of humanitarian military intervention (one of the five tenets of what became known as the Blair Doctrine). Yet, as Blair prepares to leave office, the reality in Sierra Leone is far different from the success story that will become part of his legacy.

Sierra Leone remains one of the world’s poorest nations. As the BBC reports on its website, 60 percent of its budget is met through foreign aid, life expectancy is 41 years and 70 percent of the population lives below the poverty line. Even with debt forgiveness Sierra Leone continues to import more than it exports – all testaments to a radical dependency and inequality in an otherwise resource-rich nation. This is a recipe for another civil war long after Blair is out of office.

Blair is not alone in exploiting Africa for conscience and legacy. In his January 2007 “State of the Union” address, a straight faced President Bush stated that “American Foreign Policy is more than a matter of war and diplomacy. Our work is also based on the timeless truth: To whom much is given, much is required” and therefore “we must continue to fight HIV/AIDS, especially on the continent of Africa.” For Bush, as the United States foreign policy suffers defeat in the Middle East, Africa becomes the saving grace. Its working – the Washington Post recently applauded Bush for his War on AIDS.

But according to Africa Action’s Salih Booker, since 2002 Bush’s AIDS Plan has been “more smoke than mirrors.” Instead of allocating the promised money through the Global Fund, he channels it through PEPFAR, the President’s Emergency Plan for AIDS Relief which is “often influenced by restrictive and ideologically-based policy prescriptions, such as abstinence-only regulations.” Bush undermines his own efforts through what most experts understand as unworkable ABC programs (Abstinence, Being Faithful and as a last resort, Condoms).

Worse is the AIDS-Industrial Complex. The US under Bush opposed the loosening of patent laws which would allow countries to manufacture or import generic drugs. Donated AIDS money is therefore being spent on expensive premium drugs. The pharmaceutical companies pocket the money then lobby against the loosening of patent laws. The system is locked into a cycle of profit making at the expense of the dying.

In what other parts of the world call corruption, a study by Public Campaign found that in the United States, between 1999 and 2004 “health care related interests [have] contributed $162.3 million dollars to federal candidates and party committees.” In 2003 President Bush appointed Randall Tobias, CEO of Eli Lilly & Co (a large US Pharmaceutical company) to head the U.S. Global AIDS Coordinator.

To put things in perspective consider the following: Africa as a continent, with an estimated population of 680 million people receives 4.5 billion dollars from the United States while the country of Israel, with a population of 6 million, receives about 3 billion. And as Bush spends about 4.5 Billion a year on AIDS in Africa, for the fiscal year 2008, he has asked congress for $624.6 billion to be spent on the military.

According to an Oxfam report, for every dollar given to Africa in aid, the donors get two dollars back. Oxfam also reports that a “one percent increase in trade for Africa would bring $70 billion into the continent – five times as much as Africa currently receives in aid and debt relief.”

Because of the US 49 billion and the EU 93 billion on farmer subsidies, Africa, as a result of cheaper international prices, loses more than it gets in foreign aid. A United Nations African Renewal article shows Mali received 37.7 million in US aid in 2001, but lost 43 million dollars through cheap market prices. The US was taking more with one hand and giving less with other.

But we as Africans also have to take a good share of the blame. Instead of policies that would once and for all break our dependency, our leaders trade our long-term livelihood for short-term gains. In 2003, according to Patrick Bond, a political analyst based in South Africa, the African elite had $80 billion sitting in Western banks. At the same time African governments owed these same banks $30 billion. Or in another startling statistic, between 1970 and 1996, Africa lost $285 billion as a result of capital flight while incurring a $178 billion debt.

We have reached a dangerous psychological state and internalized beggar mentality to a point where we see US and Western Aid as part and parcel of our national budget. Our elite leaders, just like Bush and Blair, find more value in white skin than in black skin, more value in white lives than in black lives and have more faith in Western solutions over Pan-African solutions.

Our dependency on the West for arbitration over all things African has dire consequences. The genocide in Rwanda unfolded as our governments waited for the Western intervention. Today the genocide in Darfur unfolds as we look to the West. Populations go hungry as our leaders wait for Western grain, and our poverty worsens as we wait for Western generosity.

So, what good does it do Africa when Bush takes more with one hand and gives less with the other? Africa does not need more Western military intervention, more debt forgiveness or more Western philanthropy. What we need is equal trade between nations and economic justice inside nations.

Mukoma Wa Ngugi is the author of Hurling Words at Consciousness (AWP, 2006) and Conversing with Africa: Politics of Change (KPH, 2003). He is the coordinator of the Toward an Africa Without Borders Organization and a political columnist for the BBC Focus on Africa Magazine where a shorter version of this article first appeared