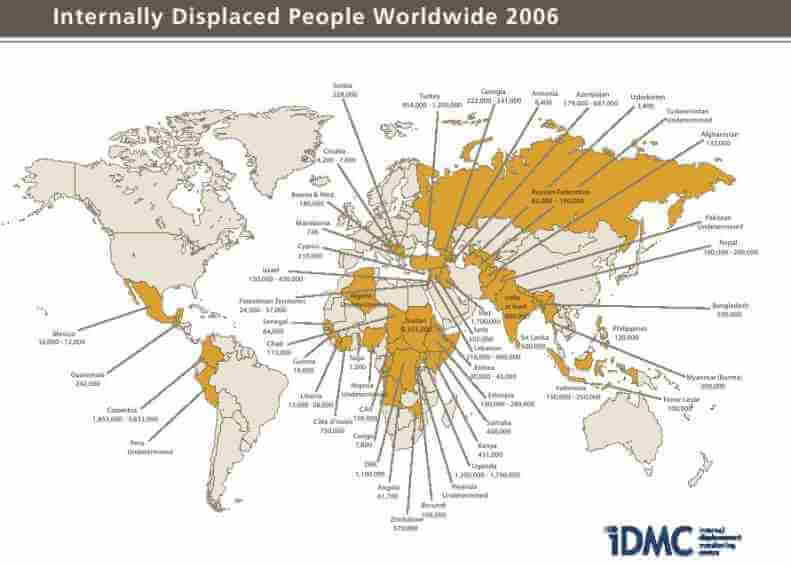 A World Glance at Internal Displacement

From IDMC – Some 25 million people worldwide currently live in situations of internal displacement as a result of conflicts or human rights violations. They were forced to flee their homes because their lives were at danger, but unlike refugees they did not cross international borders. Although internally displaced people now outnumber refugees by two to one, their plight receives far less international attention.

Many IDPs remain exposed to violence and other human rights violations during their displacement. Often they have no or only very limited access to food, employment, education and health care. Large numbers of IDPs are caught in desperate situations amidst fighting or in remote and inaccessible areas cut-off from international assistance. Others have been forced to live away from their homes for many years, or even decades, because the conflicts that caused their displacement remained unresolved.

From Wikipedia – Internally displaced persons do not have a specific international legal instrument that applies to them as do refugees, because an attempt by an outside body to tell a nation how it should treat its own citizens has been typically seen as a violation of the principle of national sovereignty and self-determination. This principle has come under pressure in recent years by those who feel a moral imperative to stop gross abuse of citizens by their governments. Recent examples include use by the United States as a primary justification for military intervention during the Kosovo War and a secondary justification for the 2003 invasion of Iraq. (source)