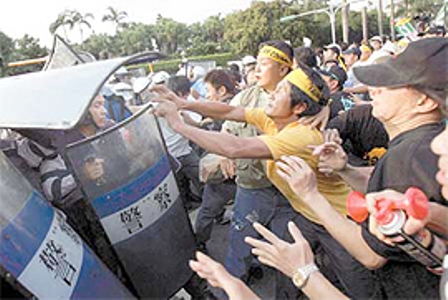 Earlier this month, some 5,000 villagers clashed with police in eastern China after laying siege to a coal mine, which they blame for damaging their farmlands.

According to Hong Kong’s Center for Human Rights and Democracy, on April 7, the villagers “surrounded and attacked” the Gubei coal mine in in Anhui province and demanded an end to its operation.

Villagers say the mine is causing land subsidence over an 8,000-hectare region, which is affecting as many as 50,000 people.

The human rights group goes on to say that more than 1000 paramilitary police were sent to the protest, and that the villagers confronted the police, smashed at least one of their vehicles, and injured vice chief Ma Shiping from Fengtai County.

An unnamed police officer from Fengtai, confirmed that a protest was held, however he said that no more than 1,000 villagers attended the protest. He also denied that any clash took place.

“No conflict happened between police and the people,” he stated.