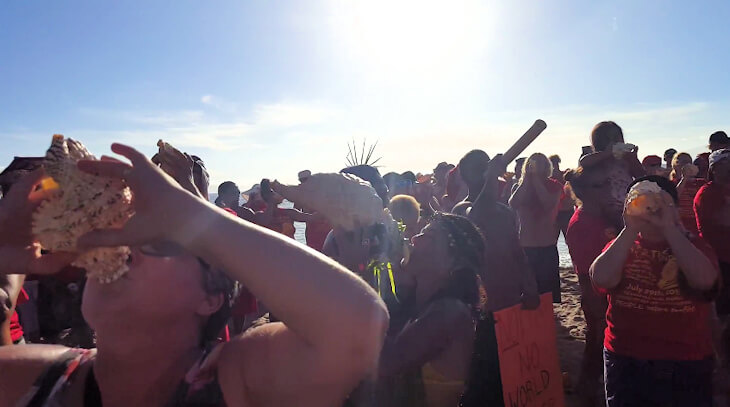 400 Maui activists say no to the Trans Pacific Partnership

On July 29th, with the secret Trans Pacific Partnership Treaty (TPP) negotiators and ministers sequestered in the plush Mariot resort at Ka’anapali Beach on Maui, 400 conch shell blowing TPP protestors showed up to say “no” to the TPP.

Event organizer Trinette Furtado said that in blowing the pu (conch shell), “We are putting out a mighty kahea (call), past the shorelines of Maui, to connect with others standing up for their ‘aina (land) and people.”

The event, which lasted most of the day, began with a Hawaiian pule (prayer) by Lorilani Keohokalole-Torio and chants preceding a press conference, during which the former Japanese agricultural minister, Masahiko Yamada, spoke through an interpreter and talked about how he had been fighting the TPP for five years. Yamada ended with an impassioned sentence about the TPP and shot his arm and fist towards the sky. The crowd, without waiting for his translation was inspired by his tone to shout and raise their arms with him.

Marti Townsend, the Hawai’i Sierra Club Executive Director spoke about the negative environmental consequences of the investor-state tribunals and said, “Signing a deal that would restrict governments from taking action on climate change, gut environmental protections, and increase poverty all at the same time is an injustice that will haunt generations to come.”

Long time Native Hawaiian activist (extending back to the 70s when Hawaiians were fighting to stop the military destruction of Kaho’olawe island) Walter Ritte said,

Unite Here Local 5 has been active in Hawai’i social justice issues and participated in the planning for this event. Although not speaking at the press conference, Unite Here representative Cade Watanabe added, “Workers around the world are hurting. We need agreements that lift living standards for all, not drive them down so that big business can make another buck.”

Lorilani Keohokalole-Torio spoke from her indigenous ancestral connection to Hawai‘i,

Behind me stands my ancestors and my ‘ohana (family). We are not aligned with people coming in and restructuring how we live. It hurts my na‘au, my gut. We are fed up, we are educated, we are empowered, and we are aligned to help this place, mother earth, regain the strength that she wants back.

After the press conference there were 2 hours of pu blowing practice in preparation for an attempt to break the Guinness World Record in beach conch shell blowing (There was method behind this noisy practice on the beach fronting the Westin hotel).

At approximately 5:30pm the 400 pu blowers were wrangled into a long line. And blew the pu five times rather than the traditional four. The final blow was directed to the TPP ministers in a meeting at the Westin hotel. Pu blowing was directed by another long time Hawaiian activist, Earl DeLeon. Call and response chants in Hawaiian followed.

On Friday it appear[ed] that the TPP negotiators failed to reach a complete agreement primarily over agricultural issues.

Ironically one of the sticking points was the U.S. subsidy and price supports for sugar plantations – a controversial subject on Maui where HC&S burns 37,000 acres of cane fields 6 days per week and up to 10 months per year. Stop Cane Burning with over a thousand members just filed suit against the burning. In an example of the differing social justice organizing joining together, some of the key organizers of this event also belong to the cane burning opposition.

This event was organized in only five days due to the secretive nature of the TPP negotiations.

PS: Many thanks to the Hawai’i ACLU for intervening with the State of Hawai’i so that the 400 didn’t end up arrested.

This article was originally posted at The Daily Kos. It has been slightly modified from its original version.