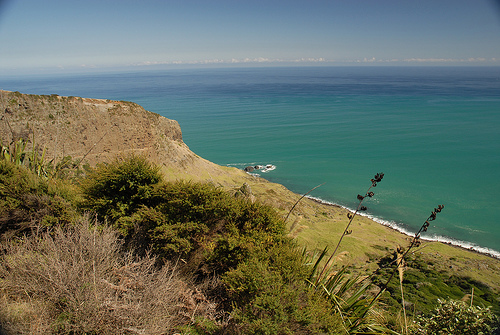 Tama tu tama ora (those who stand live) – Raglan Maori are asserting their rights over their customary fishing waters, as oil multinational Anadarko has started their drilling process off the west coast of New Zealand. Angeline Greensill, the environmental spokeswoman for Tainui hapu, has disclosed the possibility of a trespass notice and legal action against the Texas oil corporation.

They are actually within our customary fishing area of the whole west coast, so we’re just contemplating going out ourselves. They need to be served notice that they are trespassing on our rohe moana (ocean boundary). (1)

It has been a frustrating time for Raglan Maori, as they were not informed of Anadarko’s ultra-deep sea oil drilling plans; the first drift of news came through an article in the Waikato Times.

Greensill is highly disappointed that Tainui wasn’t mentioned or informed by the government in regards to corporate drilling off the West Coast, a move that evidently undermines the Treaty relationship between Maori and the Crown under Treaty of Waitangi.

We have not been consulted as Tainui… As far as we are concerned, we are the community affected and we have a say. (2)

The threat posed to the New Zealand environment and Iwi customary fishing waters is not worth the corporate capital promised by the government. 1520m is the mammoth depth that Anadarko is aiming to drill towards, with ultra-deep sea oil drilling (1500m or deeper) bringing a 1 in 19 chance of a major oil spill.

The site will be the deepest oil well ever drilled in New Zealand. Coupled with the fact that it’s off the tough West Coast, New Zealand’s Maritime oil spill response is ill-equipped which makes this an environmental disaster waiting to happen. Anadarko’s drilling ship, the Nobel Bob Douglas, started drilling today at 2.30am.

“…and Anadarko have made a big hoo-ha about how incredibly careful they’re being and how the industry’s been put through the wringer, which frankly is a load of rubbish, so we’ll see if they’re just going to go ahead and drill.” (3)

In light of the Greenpeace flotilla, Angeline Greensill said that the protesting yachts were “really making a difference.”

Two days ago, Gareth Hughes, from the Green Party of Aotearoa New Zealand, released a statement regarding the risk to the environment. The Greens have been a big supporter of Maori indigenous rights and guardianship over land and water.

“New Zealand waters are a lot rougher than the Gulf of Mexico, and help is very far away if anything goes wrong, so the Government should not be allowing risky deep sea drilling to happen off our coast.” (4)

There is no doubt that local Maori will never give up in the protection of their customary fishing waters. It was only last year that East Coast Maori managed to ward off Brazilian oil giant Petrobras with their partner, Greenpeace. There is now a growing accord throughout the NZ public that emanates solidarity with Maori and the sustainable guardianship of the environment. The weekend just witnessed mass protests on West Coast beaches with ‘Banners on the Beach’ gathering thousands of people in opposition to deep sea oil drilling.

If one thing is certain, the fervor of indigenous tino rangatiratanga (self-determination) is just getting warmed up. Whether it is through haka (war dance), songs, flotillas, hikoi (mass land march) or through the legal system, Maori have no intention of backing down. This will remain true, even if the government’s oil deal with Anadarko is merely the beginning of a courting process that is bound to shape geopolitics post-TPP (Trans-Pacific-Partnership).