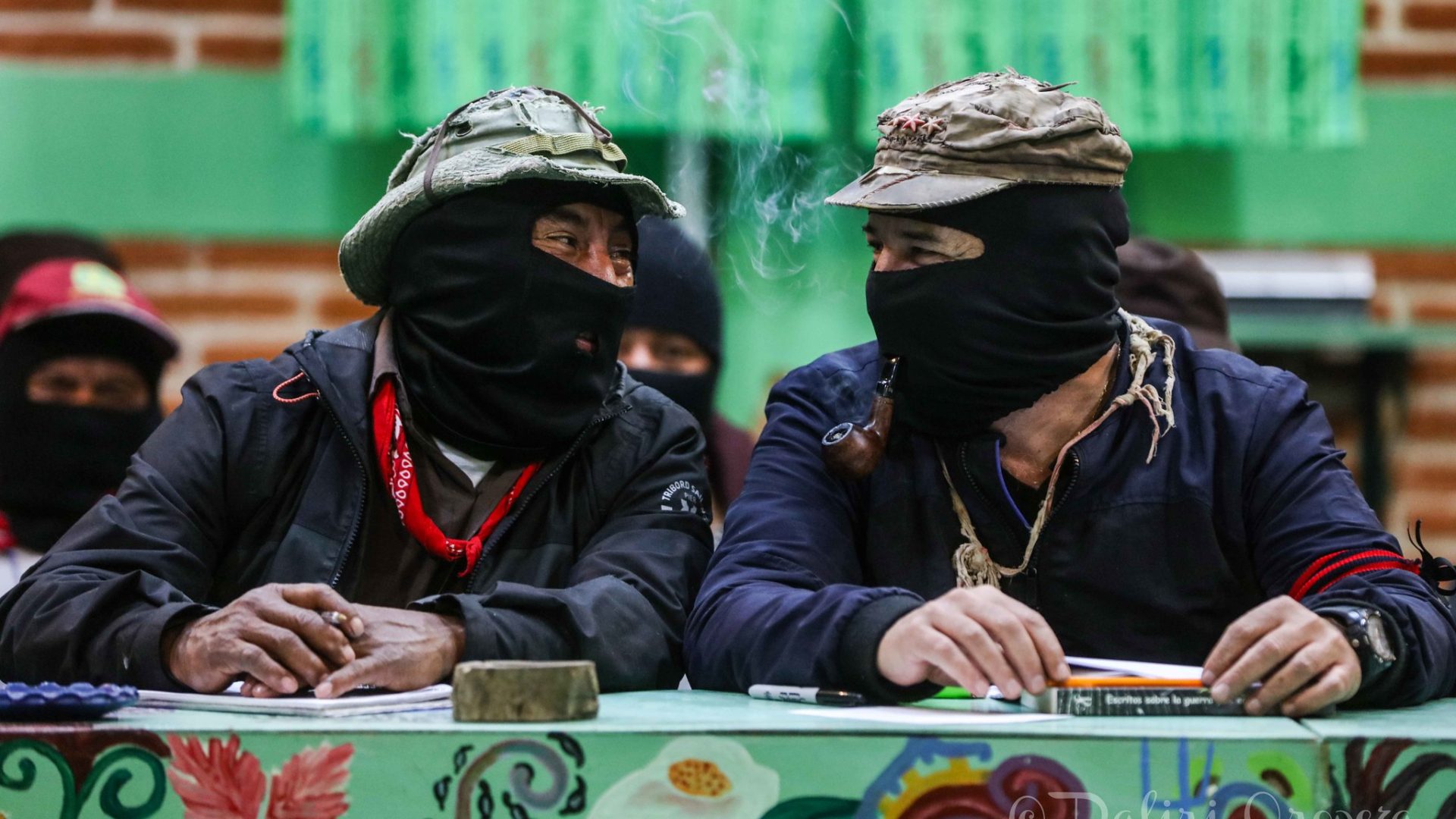 It all started, in typical Zapatista fashion, with the publication of four new communiqués signed by Subcomandante Insurgente Galeano (formerly known as Marcos) between August 10 and 15. The first one, titled Enter el telonero (“The Opening Act”), ended on a mysterious note:

Look, ladies, gentlemen, and others
Nothing to see here, nothing to see there, but wait, all of a sudden, boom:

Those familiar with the Subcomandante’s literary style already knew that something big was about to follow.

The communiqués analyze the political reality in Mexico and the challenges faced by Indigenous peoples under AMLO’s presidency and his so-called “Fourth Transformation”, which presumes AMLO’s term in office to leave a historical footprint similar to that of the Mexican Revolution and the country’s independence from Spain.

Thus far, AMLO’s rule has been characterized by a typical capitalist drive for the exploitation of the environment and the extraction of natural resources, not that dissimilar from his more conservative predecessors, despite the progressive rhetoric. AMLO’s “megaprojects” — among which the Maya Train, the Trans-Isthmus Corridor and the Project Sembrando Vida (Planting Life) — are particularly illustrative of the new administration’s disregard for the environment and its Indigenous protectors.

The top-down nature of these projects, along with the threats they pose to the well-being of both social and natural environments across the country in general, and to Zapatista communities in particular, have led the Zapatistas to condemn these in the strongest terms.

They also highlight the fact that during AMLO’s presidency a number of Indigenous defenders of Mother Earth and members of the National Indigenous Congress (CNI), in which the Zapatistas also participate, have been assassinated under highly suspicious circumstances. The most well-known case is that of Samir Flores Soberanes, an Indigenous journalist and environmental activist who was assassinated for campaigning against the Proyecto Integral Morelos — a controversial plan to build a thermoelectric plant and a gas pipeline in Morelos, his home state.

But the real news was announced in a communiqué signed by Subcomandante Insurgente Moisès, published on August 17: the Zapatistas have created seven new caracoles and four new Autonomous Municipalities (MAREZ)! In doing so, they have significantly expanded the structural and organizational capacity of Zapatista Autonomy. Honoring Samir and the many other targeted social and environmental rights defenders, the Zapatistas have named their initiative “Samir Flores Soberanes.”

Ironically, while AMLO aspired for his presidency to form a critical juncture for the country, it is now some of his loudest critics on the left who appear to be stealing the show. The creation of seven new caracoles and four new MAREZ marks the most historically significant moment for the Zapatistas since 2003, when the formation of the five currently existing caracoles was announced. The expansion also signifies an impressive growth in the organizational capacity of the movement, which has now led to the creation of these new Zapatista centers. It is the movement’s social and territorial expansion that led to the need for more caracoles and MAREZ.

This historical development did not occur in a socio-political vacuum. It is in fact the result of an internal re-organization of the movement that was quietly pursued over the past few years. Moreover, for the past months Zapatista communities have been closed to outsiders, and even the few communities that were open to Human Rights Observers in the past have been closed for some time now. Only La Realidad, where maestro Galeano was assassinated some years ago, remained open throughout this period.

This “internal closure” may have had something to do with the organizational expansion that has now been publicly announced: the Zapatistas did not want their plans revealed until they were ready to reveal them to the world themselves — until now, in other words.

In addition, the expansion of Zapatista Autonomy comes as an answer to the critics among the Mexican and international left — in particular among the anarchist movement — that accused Zapatismo of taking an “electoral turn” when in 2016 they backed Maria de Jesus Patricio Martinez, an Indigenous woman, as a joint candidate together with the CNI for the 2018 presidential elections.

At the time, many viewed it as a strategic turn of the movement, while others viewed it as a tactic. The latter interpretation seems to be closer to the truth, since the Zapatistas clearly have not abandoned the construction of their autonomous self-governance — on the contrary, they are now expanding it, both in social and organizational terms.

With Subcomandante Insurgente Moisès’ announcement regarding the creation of 11 new CRAREZ (Centros de Resistència Autònoma y Rebeldìa Zapatista, or Zapatista Centres of Autonomous Resistance and Rebellion — a newly-introduced collective name for both caracoles and autonomous municipalities), the total number of CRAREZ is now 43: 12 caracoles and 31 MAREZ.

The Zapatistas also invite the adherents to the Sixth Declaration, the members of the CNI-CIG, and the international community to participate in the construction of the new CRAREZ in any way they can: by sending money, construction material, or even with manual labor.

Details of how that can be done will follow in an upcoming communiqué, as promised by Subcomandante Insurgente Moisès.

A lot will be written and even more will be revealed later on regarding this new Zapatista initiative. What is sure at this stage is that the birth of the 11 new Zapatista centers marks, first, a critical juncture in the history of Zapatismo, the most important after the birth of the first five caracoles in 2003. Second, it signals the end of a long period of internal reorganization on behalf of the movement, which has decided to open itself up to the world again, “breaking the siege” under which they had found themselves, as Moisès described the situation in his latest communique.

Nature is an elastic wall that multiplies the velocity of the stones we throw at it. Death doesn’t bounce back in the same proportion, but rather enforced. There is a war between the system and nature. This confrontation can’t take either nuances or cowardice. Either you are on the side of the system, or on that of nature. Either with death, or with life.

The Zapatistas have certainly broken the siege.

This article was originally published by ROAR Magazine. It has been re-published at IC under a Creative Commons License.