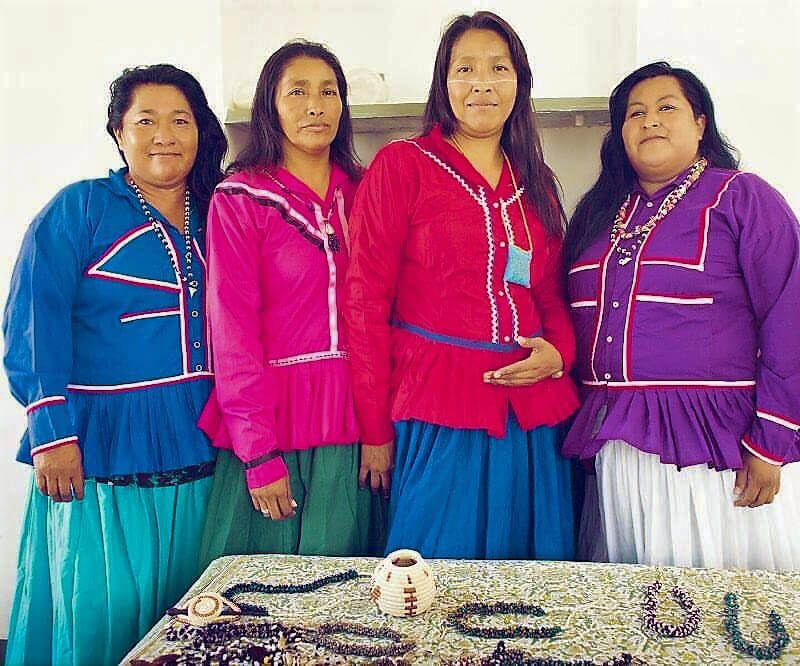 After being trained as solar energy engineers to help their communities, they dream of forming an organization called Zaah Eecla, or Daughters of the Sun, in cmiquii itom, their native Comcaac language. Photo: Núria López Torres.
Support our journalism. Become a Patron!

After being trained as solar energy engineers to help their communities, they dream of forming an organization called Zaah Eecla, or Daughters of the Sun, in cmiquii itom, their native Comcaac language. Photo: Núria López Torres.

On September 21, 2017 a year had passed since four indigenous Comcaac women from these two Sonoran communities set off on an adventure to Tilonia, a district of Rajasthan, India.

Cecy, Vero, Mina, and Fran spent six months there, the trip sponsored by the National Commission for Protected Natural Areas, in conjunction with the Indian government and the Gurudev Tagore Indian Cultural Center of the Indian Embassy, Mexico.

Along with 35 other international students from a variety of countries including Botswana, Cape Verde, Kiribati, Madagascar, Mali, Micronesia, Myanmar, Syria, Senegal, Somalia, and Tonga, they were trained as solar engineers in order to assemble, install, and maintain solar arrays in their hometowns.

The Comcaac women were the only Latinas at the training session held from September 2016 to March 2017 on the Barefoot College campus, although to date, four women from Oaxaca and two others from Yucatán, as well as a total of 70 women from 17 countries in Latin America have graduated from the course.

The Comcaac of Punta Chueca and El Desemboque live in socially vulnerable conditions, which include: their isolation and distance from urban centers; the lack of communications and of media outlets; extreme weather events; and a dependency on fishing, their principal source of income, which is being affected by the decline in commercial species.

One constant in both communities is the lack of water and electricity. An estimated 80 percent of the houses do not have power because they cannot afford the bill. This has a direct impact on fishing, as well as on people’s health, education, and safety.

The lack of stable power and fresh water supplies makes fishing and the processing of the catch impossible during days or even weeks at a time. Development in the communities has also been limited, with different impacts seen for men and women.

Women are affected more by limited access to services because of established gender roles. Women invest a large portion of their time carrying water, suffer more health problems due to their exposure to smoke from wood stoves, and suffer from the lack of energy and adequate technologies for food preparation. Consequently, they have much less time for other activities such as attending school.

These solar engineers dream of forming an organization named Zaah Eecla, or Daughters of the Sun in their native cmiquii itom. In the medium term, they hope to bring light to around 250 homes in their communities for a small, symbolic fee that will allow them to set up a community fund to improve the residents’ quality of life, especially of the elderly (both men and women), widows and single mothers.

The Daughters of the Sun are looking for the opportunity to improve both their own lives and their people’s. Being able to fulfill their dream of lighting their communities with solar power will not only allow them access to modern forms of energy and the health and educational benefits that come with it, but it will also allow them to earn a living and gain economic independence.

Miriam Cecilia Moreno López (Cecy) is a fisher and artisan from Desemboque de los Seris. Miriam is 48 and she has eight children between the ages of nine and 27.

“I agreed to participate in the project because it meant I could help improve life in the community when it comes to lighting…The worst part for me was being away from my family for six months, and the best was when we completed the course and returned home to our families with new skills and having traveled to a beautiful, distant place. “I dream of seeing my community powered by solar panels. I imagine that they will be very happy to only have to pay a very small amount compared to what they are now paying. I would say to other women that they should study while they have the opportunity so that they too can fulfill their dreams, that it’s never too late. While there is life, there is hope.”

Verónica Molina Morales (Vero) is an artisan and housewife from El Desemboque de los Seris. She is 42 years old and has a 24-year-old son.

“I thought that I didn’t have the ability to learn something that I had never even imagined existed or to be so far from my family… Because, you know, in our town there are still men that say a woman doesn’t have any reason to study, that she should just stay in here home but it wasn’t like that with me; my husband always supported me… I always say that if I have to travel, although it might be risky, if it were for the good of my family and my town I would make the trip…

“Most difficult was being so far from my family…and well, what is also difficult are the comments in town that perhaps we didn’t really learn what they taught us in India, and therefore we aren’t doing anything, and that the six months that we were there was a waste of time. But for me, the best thing is that language was not a barrier to being able to learn what they were teaching us. I would say to other women that it’s never too late to learn something and to achieve what you set out to do. I want to see that the community benefits from the training project we completed and, that in part, we too will benefit from what we learned there.”

Imelda Guillermina Barnett Díaz (Mina) is an artisan and cultural affairs representative from Punta Chueca. She is 41 years old, has an 18-year-old daughter and two sons, ages 11 and 16.

“This has been a very important step for me in my growth as a person, learning more things, although it was difficult to make the decision to be so far from home, to leave my children, and not see them for such a long time. But the best moment was when we finished the training full of new skills, a new project, and the reception from our people. They all organized a party for us…. Oh! And now I have friends from the other side of the world, my teachers and our classmates…

“People are always asking me when we are going to start work and that means that they are expecting something from us. They feel confident that we’re going to accomplish something. My children, my parents, my husband and my sisters: I’ve had their support and confidence from the beginning. While I was there, they talked with me always to encourage me. My children have said many times that they are very proud of me and that makes me feel very good, and my youngest son wants to study solar engineering.

“I’m getting good feedback…. I know that what we learned is not going to be in vain. Sooner or later we’re going to get what we need to carry out our project and it will be for the good of both our community and ourselves….”

Francisca Barnett Díaz (Fran) is an artisan and housewife from Punta Chueca. She is 47, and has 2 daughters and 2 sons between the ages of nine and 19.

“I agreed to go to India so that I could help my community. There are many people without electricity in their homes because they cannot pay the bill. Sick people suffer the most for not having power. To have the opportunity to participate in this project has helped me to see that I have the ability to do things that I never thought myself capable of doing. My main driving force has always been my children.”

This article was originally published in Melóncoyote. It has been re-published on IC with permission.