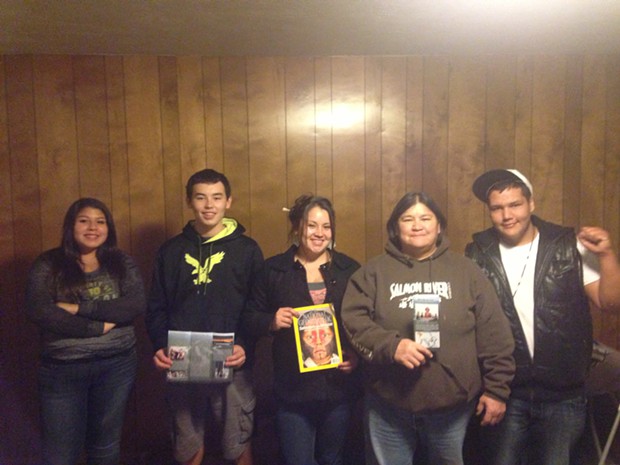 Orleans, CA – Local youth are making plans to travel to Brazil to lend a hand in the fight against the world’s most destructive dam proposal, Belo Monte. The Belo Monte Dam Resistance Delegation includes indigenous tribes and river activists from Northern California who will travel to Brazil to work with indigenous people in the Xingu basin, the heart of the Amazon, making a strong bond through mutual efforts to preserve and protect inherited cultures and natural resources from short sighted projects like the Belo Monte Dam.

The Belo Monte project, would be the third largest hydroelectric dam ever built. This project would affect 40,000 people and inundate 640 square kilometers of rainforest. Belo Monte Dam is the first step in a larger plan to extract the Amazon’s vast resources through additional dam building.

Belo Monte is one of many dams proposed for the Amazon that would affect hundreds of thousands of indigenous people, including some of the world’s last un-contacted tribes, allowing further destructive mining and deforestation practices. The Amazon Basin, about the size of the continental U.S., is home to 60 percent of the world’s remaining rainforest, and holds one-fifth of the world’s fresh water.

In Northern California and Southern Oregon a diverse coalition of Native Americans and river activists have campaigned for the removal of four dams on the Klamath River. Currently, dozens of key Klamath Basin stakeholders, including dam owner PacifiCorp, have agreed to remove 4 Klamath River dams pending congressional action.

This project represents the largest dam removal in world history and is poised to restore one of North America’s largest salmon runs, allowing indigenous people to repair broken cultures and communities.

According to Mahlija Florendo, a 16 year old Yurok Tribal member who will be going to the Amazon, “Our River is here to give us life, and we were created to keep the river beautiful and healthy. We need to keep every river alive because we cannot live without them. We cannot destroy life and if we don’t fight to keep them healthy, then we are killing ourselves, and any other life on the planet. The Amazon River is a huge bloodline for life of the Amazon indigenous as the Klamath is ours.”

Amazon Watch’s Brazil Program Coordinator, who knows the area, issues, and people, will accompany the delegation, providing guidance and on the ground support. Along with documenting the early stages of dam construction, the group plans to meet with several local tribes such as the Arara, Juruna, and the Xikrin, learning how they can best support efforts to preserve their homeland and way of life.

The Klamath group will connect Native Americans and grassroots activists from North America with tribes and organizations working in the Amazon to help them maintain their unique, rare and endemic cultures. They hope to return to the U.S. with information and firsthand knowledge to hold fundraising and advocacy events. These efforts will raise money for existing Belo Monte resistance groups and local tribes to travel and deliver their message to venues like the upcoming World Cup in Brazil in June and July 2014.

In the words of Zé Carlos Arara, a leader of the Arara people, “For us the river means many things. For everything we do, we depend on the river. For us to go out, to take our parents around, to get medical attention, we need the river for all these things. If a dam is constructed on the river, how will we pass through it? We don’t want to see the river closed off, our parents dying in inactivity. For us the river is useful and we don’t want it to wither away – that we not have a story to tell, that it become a legend for our children and grandchildren. We want them to see it with their own eyes.”

Fundraising events to help support the Klamath delegation in their efforts to travel to the Amazon: