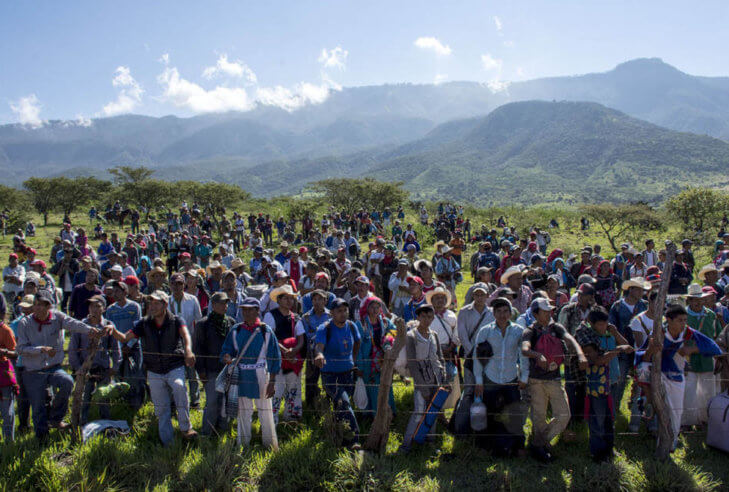 Agustín Del Castillo/Milenio
format_textdirection_l_to_rEste artículo está disponible en español aquí
Editor’s note: Wixárika leaders and community members are gearing up to send another mass contingent this Friday, Oct. 20, to occupy the second of a series of ranches in an ongoing restitution of 10,500 hectares (almost 26,000 acres) of land that was wrongly taken from the native Wixarika around the last turn of the century.

The first possession took place under a court order one year ago—on Sept. 22, 2016—amid intense resistance and threats of violence on the part of the non-indigenous ranchers of Huajimic, who have held the land for over a century.

It was a full year before the court set the date for a second restitution–Sept, 22, 2017–for a 63.7-hectare parcel. More than 1,000 Wixárika community members walked three hours to meet with the court officials for the signing over of the land; but they never reached their destination because the ranchers staged a roadblock and the police never arrived to enforce the law. The restitution was rescheduled for this Friday (Oct 20, 2017).

The Mexican federal government’s commissioner for dialogue with the indigenous communities, Jaime Martinez Velóz, announced yesterday the establishment of a working group to address the crisis of territorial restitutions in Huajimic on behalf of the Wixarika (Huichol) community Wuaut+a (San Sebastian Teponahuaxtlan), with the intention of generating funding for restitution for the ranchers, which would lower the risk of violence.

Velóz shared the news about the working group with Carlos Gonzalez Garcia, attorney for the community of San Sebastián. Meanwhile from Tepic came some unfavorable news with regard to the rights of his defendants, as the magistrate of Agrarian Tribunal 56, Aldo Saul Munoz Lopez, decided to defer until January 2018 the determination for seven new restitutions involving around 300 more hectares because of legal technicalities requested by the ranchers who currently hold the land. The argument: three of the seven affected owners had not been notified, and the others had a new lawyer, and hence, they invoked the Agrarian Law section that they said gave them time to study the case so as not to leave their clients without defense.

Gonzalez Garcia protested against this interpretation, saying that the law does provide such guarantees, but not once the sentence has been issued and is already in place. Meaning, it is irrevocable in its effects.  He considered the decision unfortunate for the indigenous cause.

What could not be detained was the execution of the sentence of the judgment 1472/2012, which requires turning over 63 hectares in the possession of Erlinda Montoya Ultreras, to the Huichol community.  The legal procedure on the land is set for next Oct. 20 after failure to carry it out on Sept. 22 because the ranchers formed a roadblock and would not let the legal authorities pass.

“Two days ago we met with the government of the state of Jalisco, the subsecretary of government, the secretary of Social Integration and Development, Rural Development, with the prosecutor and several authorities, and supposedly they are going to attend on their behalf. We are asking that they arrive at the agreements necessary with their partners in the government in Nayarit and with the federal government, so that they coordinate and see the way to get the magistrate to the land in a safe manner.”

Asked whether the magistrate could be taken to the land by helicopter, as has been offered by the government of Jalisco state: “We have asked this, they said they were going to explore the possibilities within the jurisdiction and territorial issues. I said to him that if there is political will, they will look for the method to transport the magistrate, because in the end Jalisco and Nayarit are both a part of Mexico. One can ask permission of Jalisco and Nayarit, it can be in a helicopter, or Nayarit can also find as way to provide it, or the federal government can establish an agreement of coordination, there are a multitude of schemes if it is something they wish to resolve.”

There has also been some interest on behalf of Nayarit authorities, Gonzalez said. “In the hearings I was approached by a government official of Nayarit, and he argued that they were disposed to comply with the judgments of the sentence; everyone says they are willing…”

Jamie Martinez Veloz told Gonzalez that he has already had contact with the deputy of Nayarit Guadalupe Acosta Naranjo, and that they are going to create a working group with legislators and representatives of the three levels of government involved. The idea is also to generate resources for a federal program created to reduce the threat of social conflicts like this one in rural areas (Cosomer) by indemnifying the current landholders and thus reducing the risk of violence.

This article was originally published in Milenio. It has been republished on IC with permission.