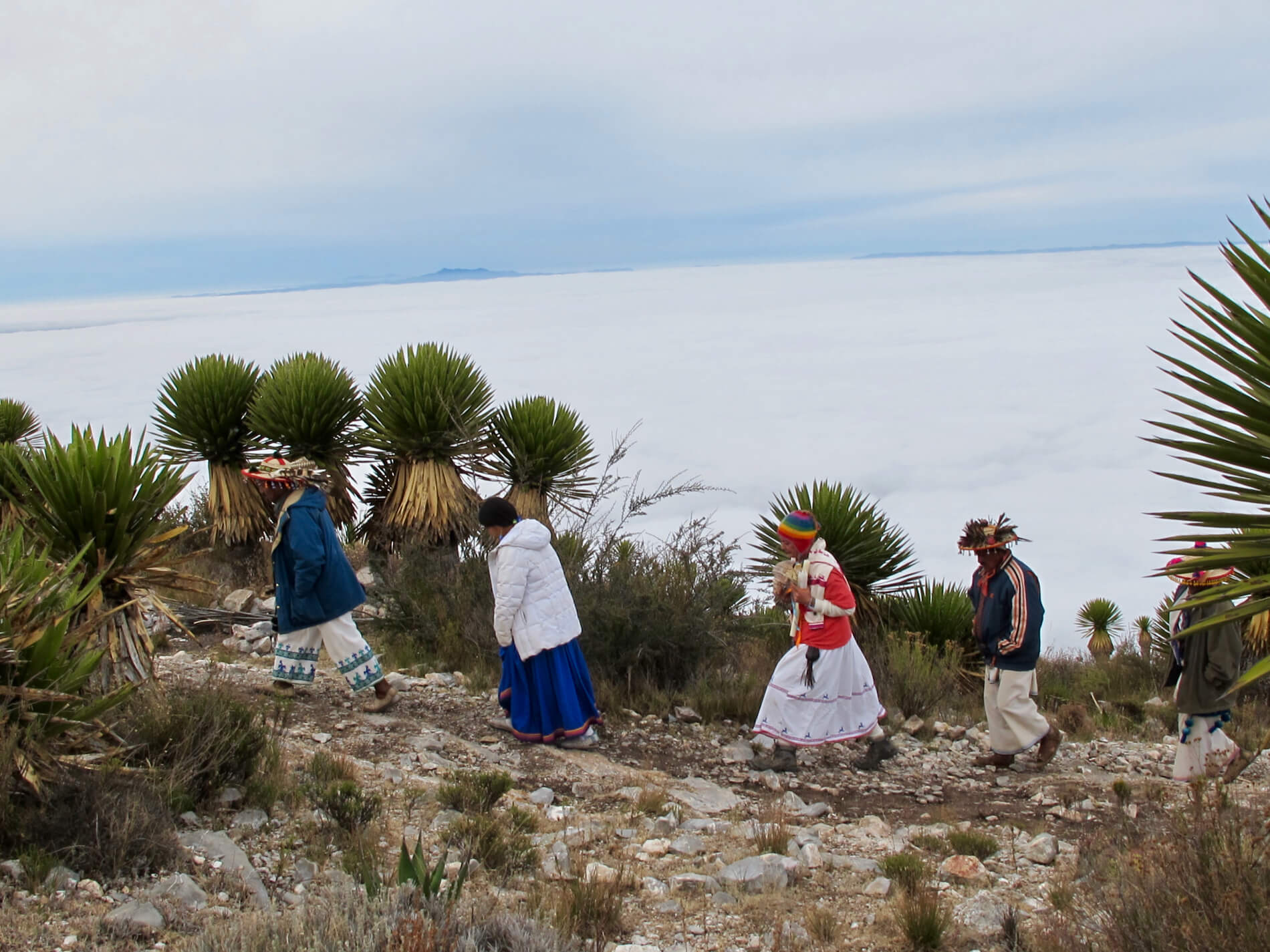 Wixárika: “We will not give up protecting the Wirikuta Territory”

Participants in the historic mass pilgrimage to Wirikuta’s Cerro Quemado on Feb. 14-15, 2012, make their way to the xiriki, or house of the gods, at the top of the Cerro Quemado; a sea of clouds carpets the desert below as far as the eye can see. (Tracy L. Barnett photo)
Support our journalism. Become a Patron!

Tepic — On July 24, in the city of Tepic, Nayarit, traditional, civil and agrarian authorities of the Wixárika (Huichol) people gathered in order to work together in the defense of their sacred territory Wirikuta, in San Luis Potosí, Mexico.

After the meeting they issued a statement, signed by authorities of the communities of Waut + ta/San Sebastián Teponahuaxtlán, Tuxpan de Bolaños and Tuapurie/Santa Catarina Cuexcomatitlán, both from Jalisco; Bancos de San Hipólito, Durango, and Nuevo Valle, from Nayarit, and by representatives of the Wixárika Regional Council for the defense of Wirikuta and the Wixárika Union of Ceremonial Centers of Jalisco, Durango and Nayarit.

The statement refers to the Wixárika people “having been summoned” this year for the second time, by a civil organization called “Union of Ejidos of the Chichimeca Region of the Northern Altiplano”, to dialogue to “help in the resolution of Court Order 819/2011-VI” that the Wixárika people filed against the mining company First Majestic Silver Corp.

Thanks to this protection, the activity of the mining companies was suspended in Wirikuta, — at least until the case is resolved.

They explain in their statement: “On July 2011, the Wixárika community of San Sebastián Teponahuaxtlán, in the state of Jalisco, through its traditional authorities, initiated a trial for legal protection (amparo petition 819/2011-VI), before the omission of the Mexican state to guarantee our human rights and with the objective of the integral protection of the sacred territory of Wirikuta against mining threats.

In the extension of the legal protection (2013) the violation of the right to a healthy environment was added based on the precautionary principle.

This extension of the protection protects the right of the inhabitants of the Altiplano to live in a healthy, non-toxic environment, and to have access to clean water, without it being poisoned or depleted by industrial megaprojects. In September 2013, a federal district judge decreed the provisional suspension of all concessions to miners who intend to exploit the sacred territory of Wirikuta.

With the suspension, it is provisionally prohibited to carry out any prospective work in the area, while the legal protection is resolved definitively through which the plaintiffs seek the revocation or cancellation of all mining concessions granted by the authorities. There is no definitive sentence yet.

In addition, they declare in the statement five points: “One, the traditional, civil, and agrarian authorities of the Wixárika people in defending Wirikuta and its area of influence are respectful of the people who live there and recognize them as the guardians of our sacred territory and we reiterate that our struggle is for everyone’s life, not against the inhabitants of the Altiplano and the Sierra de Catorce.

“Two: We support the demands and requests that the inhabitants and groups of the Altiplano of Potosi and the Sierra de Catorce have been making in recent years to protect the Altiplano-Wirikuta from depredation of the territory, and to improve the quality of life of the inhabitants with development proposals that are harmonious to the environment, and not destructive such as mining (which offers a few jobs in exchange for the destruction of its heritage), or agroindustry that devastates biodiversity, and wind turbine fields that strip the owners of their lands and destroy the flora and fauna of the place, among other social, cultural and natural effects.

“Three: We support the struggle that the inhabitants and groups of the Altiplano are currently carrying out for a definitive ban on anti-hail cannons and aerial sprayers that bombard clouds to avoid rains as well as the claim on public access to water before any industrial activity or megaproject is imposed.

“Four: Although the mining company and its allies have not stopped maneuvering and wish for the Wixarika people to desist from protection 819/2011-VI, we declare that we will not give up this protection since it is our legal bastion to protect the legacy that we must take care of for our people, and our rights to continue existing as original people, and to practice our ancestral spirituality.

“Five: we maintain our requirement to the Mexican State: the cancellation of all mining concessions in the territory of Wirikuta and area of influence and the guarantee of the human right to water for all the residents of the highlands of San Luis Potosí.”

They conclude that for all the above they will not attend the meeting convened on July 27 by the Union of Ejidos of Region Chichimeca of the North Altiplano, and that “they will not acknowledge any agreement or agreement that is celebrated in said meeting.”

To see the original statement and follow the news of the Wixárika Regional Council visit http://consejoregionalwixarika.org/

This article was originally published in Spanish at La Jornada. It has been translated to English for IC.