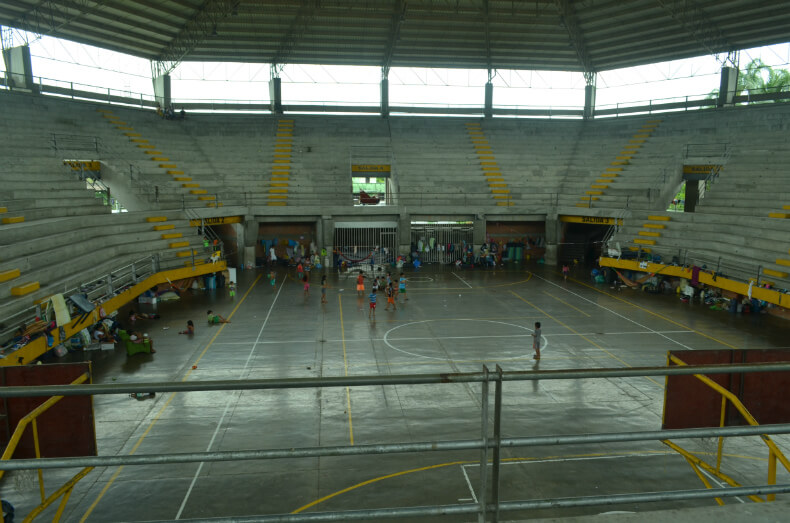 “We couldn’t resist any longer” 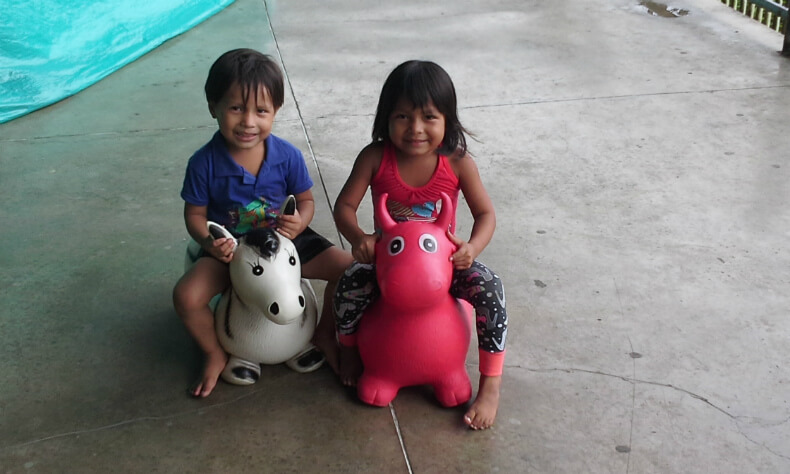 Children of the Wounaan People easily find diversion in the abandoned basketball stadium of Buenaventura, the largest city on Colombia’s Pacific coast. Some chase pigeons that try to settle around the highest rows of seats, casually resting to look out over the surrounding rooftops to the islands of mangrove and forest that bar the view to the sea. Others jump skipping ropes as two siblings ride brightly-coloured toy ponies past the plastic sheeting beneath the bleachers that grant each family their privacy.

Displacement from their territory has exacted a cruel cost. Two children have died since their community of Unión Aguas Claras was forced to flee ten months ago: one year-old Neiber Cárdenas Pirza died while suffering diarrhoea and vomiting last December, then in June the community lost a two day-old baby.

According to one of the displaced Wounaan it is “all the chemicals” in their new life that are to blame, coupled with the inadequate diet provided by Colombian authorities that leave them vulnerable to sickness. The concrete structure of the basketball stadium is also less hygienic than the wooden homes in the territory they were forced to abandon, she said.

But to another Wounaan there lies a deeper cause:

It is not just the illnesses of the Occident that have made us so ill. It is because of spiritual sickness; because of the loss of our spirituality.

He claimed that the deadly sickness in June was foreseen by their shaman, who had been unable to predict whether it would kill an adult or a child.

The community was preparing for a ceremony the following day in which they would use their spirits to “see” how affairs stood in their territory that has lain abandoned for nine months.

The pressures against them had been manifesting for years, the Wounaan told IC, through the armed conflict, petrol exploration, and narco-trafficking.

“The area is very strategic: the river marks the frontier of the FARC and the paramilitaries, and is also the means by which the Army moves,” One Wounaan explained. “Now all of the Rio San Juan has become militarized.”

By November 2014, the harassment was no longer confined to their wider territory. A Wounaan woman explained that, one day, “Six paramilitaries arrived and asked to sleep in the settlement but the community replied that they could not; we said that we reserve the right to say no to all armed groups.”

That evening the local head of the paramilitaries arrived to threaten the assembled community, warning them that their attitude could only work to turn over their territory to other armed groups. Fearful for their safety, the people of Unión Aguas Claras resolved to leave together. A total of 344 people–63 families–boarded boats before dawn and descended the San Juan River to where it joins the lower Calima River. From there, they reached the estuary and followed the coast to Buenaventura, where Colombian authorities placed them in a stadium that only recently became vacant. Shortly before the Wounaan’s arrival, it sheltered Afro-Colombian and campesino families displaced by clashes in Bajo Calima between the Armed Forces and BACRIM (“bandas criminales” – armed criminal bands mostly born out of officially disbanded right-wing paramilitary groups).

Not a single person from the community stayed back. Describing how the community fished and grew “yucca, bananas, pineapples… everything”, one Wounaan lamented, “Now there will be nothing left of our farms; back there in our territory everything will be destroyed.”

When they were in their territory, all the women would gather every two months to prepare and weave threads extracted from the Werregue Palm into baskets and handicrafts that they would sell. The community would hold meetings to arrange days of minga, collective communal work that could involve tidying the territory or arranging the sewing of seeds in their farms. They also said that they carefully guarded their culture, one person stating unequivocally that, “He who does not speak Wounaan is not a Wounaan.”

The Wounaan language is now spoken in many of Colombia’s biggest cities, including Bogota, Medellin and Cali, where many Wounaan end up after being cleared from their homelands in the Pacific regions of the Valle del Cauca and Choco departments. Throughout 2014, Colombia’s National Victims’ Unit recorded 97,453 cases of forced displacement, with the Pacific region among the most impacted.

Wellington Carneiro of Buenaventura’s UNHCR office says there have been “several displacements of indigenous Wounaan communities [including] Balsalito, Chachajo, Chamapuro, Buenavista, Tio Cirilio, and Agua Clara, and recently the Papayo community. In total more than 1000 people have been displaced from the Lower San Juan River.”

The identity of the groups fighting for control of the San Juan and Calima waterways is unclear. The local authorities in Buenaventura initially responded to the community’s arrival by claiming there had been no need for the Wounaan’s displacement, and their territory was safe for their return.

However, according to Carneiro,

The Lower San Juan river is strategic to armed groups due to the access to the sea and for the trafficking of weapons and drugs. Also, with the tighter security implemented around the port of Buenaventura, the routes through the San Juan delta became more attractive. There are several groups disputing the control of the area apart from the Colombian Navy. This…puts the population under the pressure of armed groups for information and through restrictions to their mobility and other threats in the context of a disputed military control over the area.

Colombia has been wracked by a conflict between two competing drug-trafficking networks – the rising Urabeños and the declining Rastrojos – who each seek to monopolize the transport of cocaine via the Pacific coast. Confronted by a stubborn Rastrojos presence in Cali and Buenaventura, the Calima and San Juan rivers have become more strategic as the San Juan is fed by the Capomá river that provides a route into the Colombian interior.

The area has also seen BACRIM and guerrilla groups diversify their enterprises through illegal mining, timber, and agriculture. According to one of the displaced Wounaan, such activities of illegal armed groups are only one aspect of a broader war against indigenous territories across Colombia. He also warned that this broader conflict will not cease with the possible signing of a peace accord between the government and FARC guerrillas.

The peace negotiations have been proceeding in Havana, Cuba, despite the intense opposition of former president Alvaro Uribe and his powerful Centro Democratico party. An agreement is expected to be announced in the coming months, to be followed by a reworking of the country’s 1991 Constitution.

Earlier this year, Caracol, one of Colombia’s leading private TV channels, broadcast a series under its Septima Dia weekly format on Colombia’s Indigenous Peoples, called Disharmonization: the Arrow of the Conflict. The controversial series attacked indigenous justice systems and claimed that indigenous authorities took massacre compensation from their intended recipients, an allegation that was debunked. The series also insinuated that indigenous institutions were supportive of FARC guerrillas, something that Colombian journalist Cesar Gaviria described as but one falsehood in a series “plagued by investigative and journalistic failures”.

Indigenous Nasa activists seeking to recover the La Emperatriz sugar plantation “from its rightful owners” were among those targeted by the series which also served as a platform for Centro Democratico’s Paloma Valencia, who advocates dividing the department of Cauca into two: “One for the indigenous for them to do their strikes, their demonstrations, and their invasions. And one directed towards development where we can have roads, promote investment and where there are dignified jobs for the Caucanos.”

Henry Caballero Fula of the Peace Commission of the Regional Indigenous Council of Cauca (CRIC) has written that the four aims of the Septima Dia broadcasts were to spread the views that:

The trajectory of such arguments in Colombia’s current political climate are a pressing danger to Indigenous Peoples, according to the displaced Wounaan who are politically active through the Regional Indigenous Organization of Valle del Cauca (ORIVAC).

On Sept. 15, Feliciano Valencia of Cauca’s Nasa people, one of the most visible indigenous leaders in Colombia, who had addressed delegates of the displaced Wounaan at an ORIVAC conference, was abruptly arrested and imprisoned on charges that were previously dismissed in 2011. The charges stemmed from a 2008 controversy in which an undercover soldier–who had been exposed infiltrating a peaceful protest–was held subject to indigenous justice mechanisms. The CRIC argues that indigenous jurisdiction forms part of the 1991 Constitution, and that the imprisonment of Valencia is a “coup by the state against our Constitutional rights, and revokes the peace treaty that the Constitution of ’91 represents in our history”.

These developments hadn’t yet occurred when IC spoke to the Wounaan in Buenaventura, however, one person concluded that “Indigenous people face an emergency situation throughout the country, not just in the Rio San Juan.”

The Wounaan are now changing their strategy over how to return to their territory, turning away from the municipal and departmental authorities and towards the Ministry of the Interior, the Ombudsman, and the international community.

The municipal authorities are not cooperating with the indigenous people; they always tell lies – they always say they will do something ‘mañana’. We present our willingness to return but we need guarantees of security and dignity in our territory. Because the local level has not achieved anything we go to the national and international level, including to NGOs and the UN. 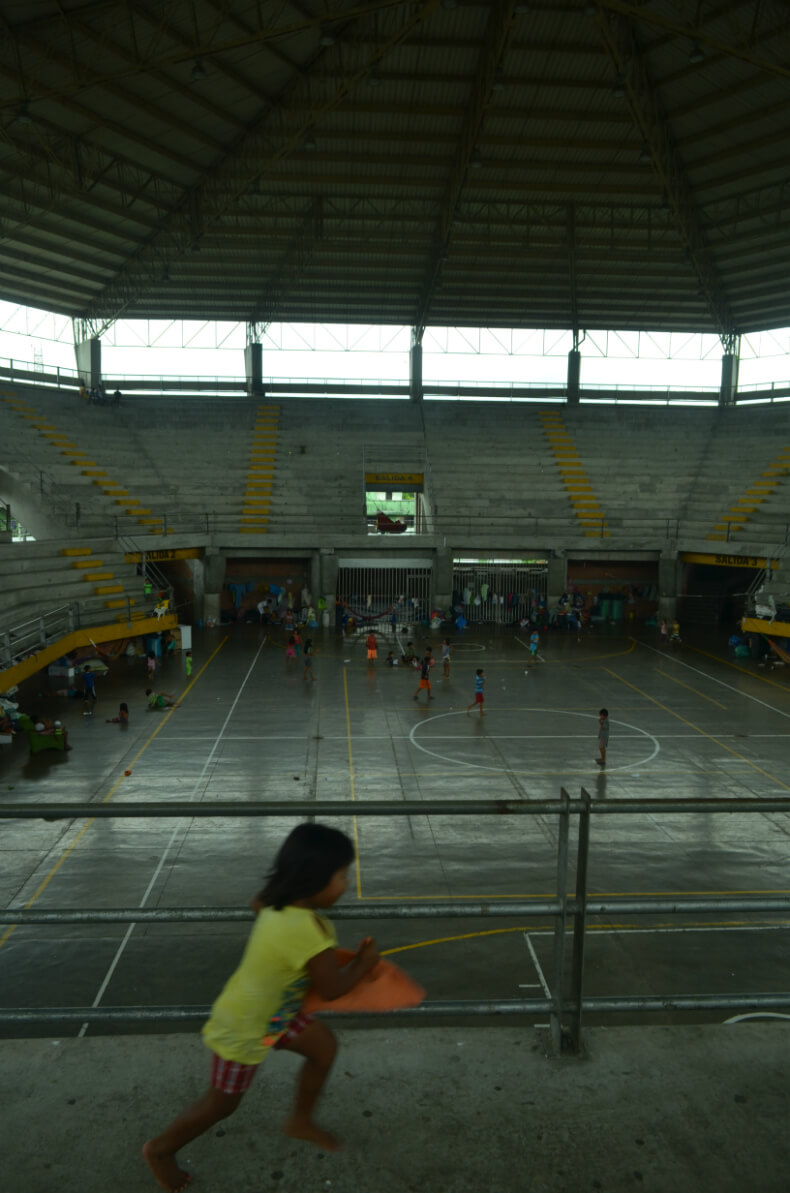 The UNHCR’s Wellington Carneiro cautions that the government ministries in Bogota lack a presence in the region and don’t have “a clear picture on the problems of the Wounaan”, however, “there is also a very negative stigmatization of the indigenous communities by the local authorities.”

One of the Wounaan observed that local officials “always come and talk, and then afterwards [do] nothing.” She said that her emphasis was on maintaining and developing the cultural and political activities of the group: “We need to strengthen our community so we can defend our territory”.