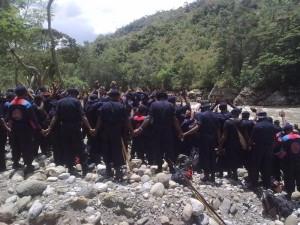 Wamena Bleeds Again: Defender of the Land of Papua killed by Indonesian Police

The West Papuan highlands have been plunged into a state of tension and fear, as Indonesian police shot dead a member of the indigenous community security group, Defenders of the Land of Papua. Indigenous Papuan activists are operating in a state of increased repression, surveillance and militarization backed by the Indonesian state’s supporters in the US and Australia. Jacques Friedman reports.

On October 4th, a member of Petapa (Penjaga Tanah Papua – Defenders of the Land of Papua) was shot dead by Indonesian police in the West Papuan highlands town of Wamena. With this act of extrajudicial murder, the Indonesian security forces have stepped up their campaign of repression against the movement for indigenous rights and self-determination in West Papua. They have also revived painful memories of the Bloody Wamena incidents that rocked Wamena ten years ago, when Indonesian police and army forces brutally attacked community posts flying the Morning Star flag, leaving activists dead, beaten and imprisoned, and communities traumatized and displaced.

The increasing momentum of popular mobilizations against Indonesian rule, witnessed in the recent rejection of Jakarta’s manipulative ‘Special Autonomy’ law, is being matched by new levels of violent repression by the Indonesian police and military. On Oct. 4, DAP’s (Dewan Adat Papua – Papuan Customary Council) security wing Petapa came under severe attack, as four of its members were shot by police, killing coordinator Ismael Lokobal, age 34, and leaving another senior member in a coma. The incident happened after local airport police seized uniforms and cash being sent to Wamena from the coastal capital Jayapura. Petapa members attempted to negotiate the return of the seized goods but were denied by police. Soon a crowd had gathered at the airport police station and confronted the police; Wamena’s police chief was struck in the face by a rock. Police launched a violent pursuit of Petapa members, chasing them to their headquarters at the regional DAP compound nearby, where Lokobal was shot dead.

Sources on the ground have reported that in the aftermath of the incident, the situation in Wamena has become extremely tense, with the military patrolling the streets and enforcing a curfew. Local human rights advocates have sought in vain to negotiate a resolution to the crisis with local government and security forces leaders, and community leaders managed to prevent a rumoured attack against police forces by members of the victims’ clan. The tension persists, and DAP and Petapa’s status as targets for repression and surveillance by the state apparatus is more starkly confirmed.

There is an urgent need for solidarity and support as Papua-wide mobilizations continue to put pressure on the Indonesian occupation and its foreign backers – which include the US and Australian governments as well as foreign resource extraction companies such as Freeport McMoran and BP. This urgency is reflected as well by the recent disastrous flooding in Wasior, which Papuan NGOs blame on rampant logging around the area, and which has left over a hundred people dead and thousands displaced. In light of the ongoing tension and popular opposition to foreign rule, further mobilizations and incidents are expected in the weeks to come.

Jacques Friedman is an independent journalist who works in solidarity with the Indigenous Peoples of West Papua. You can more of his reports at his website, Independent and Unmerged