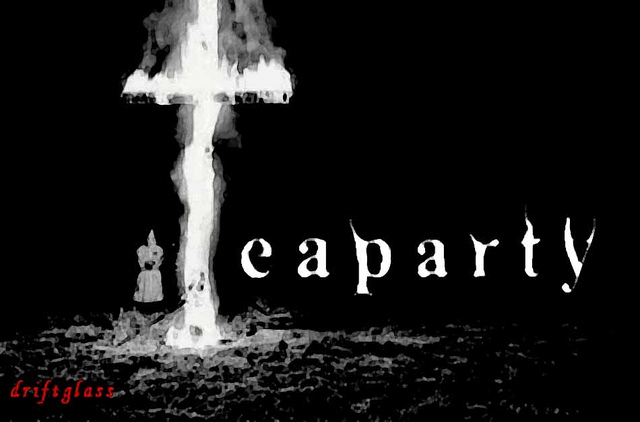 Image by Driftglass (driftglass.blogspot.com) Some Rights Reserved
Support our journalism. Become a Patron!

When most people think of white power, they imagine men in white hoods burning crosses. While few would think of men in pinstripes burning cigars, in reality that is where white power resides. In Whatcom county, Washington state — the Northwest corner of the United States, bordering the Salish Sea Where All Life Began — white power is no longer expressed through cross-burnings; it is demonstrated by overt attacks on tribal sovereignty, combined with covert assaults on environmental protection, the Growth Management Act (GMA), and Indian treaties. In the Wall Street/Tea Party convergence supporting the proposed Gateway Pacific Terminal (GPT) coal export facility at Cherry Point, white power has emerged as a threat not only to endangered species like the Orca whale and Chinook salmon, but as a threat to the continued existence of democratic functions of governance. While anti-democratic organizations like the California-based Pacific Legal Foundation presently play an accessory role in the GPT fraud, they played a more prominent role in the Wise Use movement hate campaign against GMA in Washington in the 1990s Reign of Terror. As noted at the Cascadia Weekly on April 16, 2013, the property rights groups Pacific Legal Foundation provided counsel to in the 1990s have A History of Violence.

As Goldman Sachs, Peabody Coal, Burlington Northern Santa Fe railroad, and Pacific International Terminals (SSA Marine) combine to undermine democracy and human rights on the shores of the Salish Sea, Americans from coast to coast had better sit up and take notice. When it comes to white power, the Wall Street/Tea Party convergence signals a terrifying new world order.

Until recently, many locals in Whatcom county, Washington thought the orchestrated hype around siting the largest coal shipping terminal in North America at Cherry Point was a foregone conclusion. After all, how do you stop Wall Street and the AFL-CIO from stampeding local and state authorities through Inflammatory Deceptions into supporting one of the largest and most fraudulent energy export schemes in our country’s history? One little Indian tribe with a burial ground and fishing treaty rights in the middle of the project doesn’t amount to a hill of beans in that league. But as the New York Times reported on October 11, 2012, maybe 57 tribes in the form of the Affiliated Tribes of Northwest Indians do.

Judging by the seemingly disparate anti-environmental, anti-Indian, anti-democratic initiatives by Wall Street, organized labor and the Tea Party over the last few years, one might come to the conclusion that Lummi Nation — the small Indian tribe that once owned the San Juan Islands — holds more cards than once thought. Unless, of course, you are part of the inner circle strategically designing a multi-year, multi-pronged offensive to undermine environmental protection, tribal sovereignty and a functioning democracy.

Correcting the flawed speaker allotment system at subsequent public hearings to allow more diverse points of view, the Corps of Engineers and Washington Department of Ecology also established an online website for public comment on the Gateway Pacific Terminal Environmental Impact Study. In January 2013, the website was hacked and temporarily shut down.

In a January 17, 2013 letter to the editor of The Northern Light, Harold Roper of Birch Bay — a seaside resort community adjacent to the Boundary Pass shipping lanes serving Cherry Point — noted that in December 2011, the City of Ferndale had relinquished its claim to Nooksack River water in order for Public Utility District #1 to use it in supplying Pacific International Terminals with 1.9 billion gallons per year for their proposed Cherry Point operation. According to Mr. Roper, Ferndale residents now rely on inferior groundwater. In May of 2013, an informant to this author stated that Ferndale residents are complaining of bad tasting water and rising utility bills.

As noted in an April 2013 article about Gateway Pacific Terminal at Whatcom Watch, the local small city mayors, at a roundtable sponsored by League of Women Voters, responded to accusations of improprieties in their premature, formidable support for GPT stating it was immaterial. According to the author, Sandra Robson, SSA’s consultant Craig Cole had been so successful in stampeding local elected officials, chambers of commerce, Port and Public Utility Commissions over the previous three years, that the improprieties had already become normalized. Commenting on a January 2011 Small City Caucus meeting where SSA and Cole came to speak, Robson observes that the mayors of Lynden, Everson, Nooksack and Sumas wrote letters of support for GPT in February 2011, before any facts about the proposal were made public–one year before the SSA GPT permit application was even submitted.

In April 2011, says Robson, SSA consultant Craig Cole — accompanied by labor leaders and the president of the Whatcom Chamber of Commerce — attempted to bully the Blaine City Council into falling in line. While the Blaine mayor had signed a letter of support in June 2010, the council wanted to know what the adverse impacts of GPT might be. Undermining their legitimate concerns, the small city mayors had already sent a letter — co-signed by Northwest Central Labor Council, PUD #1, Craig Cole, former Bellingham mayor and Puget Sound Water Quality Authority member Tim Douglas, and then Washington State Senator Dale Brandland — to the Washington Public Lands Commissioner, Peter Goldmark, asking him to weaken protections for the Cherry Point Environmental Aquatic Reserve.

While three of America’s wealthiest corporations were busy manipulating local pawns like small city mayors and labor thugs through their project mouthpiece Craig Cole and Seattle PR firms like Edelman, professional anti-Indian hatemongers from the nationally prominent anti-Indian organization Citizens Equal Rights Alliance (CERA) were busy Mobilizing Resentment against tribal governments and treaty rights. On November 3, 2012, CERA celebrity and board member Elaine Willman was featured on Whatcom county’s  KGMI radio show Saturday Morning Live, hosted by Tea Party activist Kris Halterman, in which she stated that, “tribalism is socialism, and has no place in our country.”  On March 30, 2013, Willman was brought back to promote the April 6 CERA Anti-Indian Conference in Bellingham, where CERA would teach citizens, “how to take on tribal governments.”

Simultaneous with KGMI’s stoking of “white rage” on Saturday Morning Live, KGMI radio host Dick Donohue on his March 23, 2013 Wealth Wake Up interview of Gateway Pacific Terminal consultant Craig Cole — in a special two-hour promotion of the economic salvation embodied by the GPT proposal — joined Cole and Radio Real Estate host Mike Kent in suggesting opponents of GPT are unpatriotic, even un-American. On March 30, 2013, Donohue interviewed CERA board member and Minuteman Tom Williams, who promoted the untrue idea that Indians have citizenship privileges without paying taxes, and noted that CERA was currently mounting a national offensive to terminate tribal sovereignty. On April 6, Donohue and Halterman interviewed Willman and Phillip Brendale live from the Anti-Indian Conference, who declared that the purpose of the regional gathering was to “Take these Tribes Down.”

Sandi Brendale, chair of the Republican Liberty Caucus of Washington and wife of Phillip, made her bones as a media activist for Eagle Forum, a Far-Right Christian organization with a history of anti-Indian organizing.

In the sights of the Wall Street heavies, Tea Party crazies and labor goons, of course, is Washington Governor Jay Inslee and President Obama. While Inslee appears to be fair-minded and less corruptible than his predecessor Christine Gregoire — and certainly less conflicted than U.S. Senator Patty Murray (D) WA, whose husband works for SSA, or U.S. Congressman Rick Larsen (D) WA, whose main guest of honor at his April 10, 2012 private re-election fundraiser was Craig Cole — President Obama owes his job to Goldman Sachs, which financed his rise to power. Whether he will use his office in support of white power on the Salish Sea remains to be seen. What we do know is that the Wall Street/Tea Party convergence bodes ill for our society as a whole. While Tea Party Terrorists and labor thugs are merely the spear carriers for Wall Street, they pose a serious threat to democracy. The sooner we deal them all a fatal blow the better.