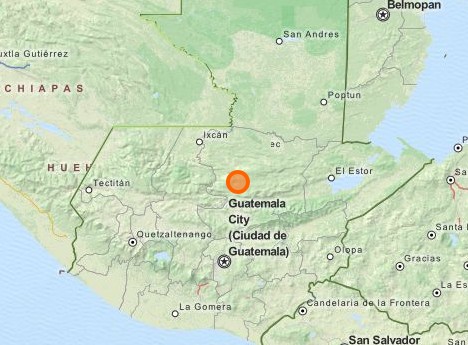 Ongoing attacks on the Q’eqchi community of Saquimo Setaña, Cobán, central Guatemala were reported by The Guatemala Solidarity Project, on November 10th, including arson of houses, physical attacks on community members and the arrest of community leaders under false charges.

The criminal acts were allegedly ordered by a person who claims to be the rightful heir of Saquimo Setaña’s land. The woman in question was also able to get an eviction order issued against the community, the authorities failing to carrying out a proper investigation of land ownership.

Some historical background, Native Guatemalans were forced by law to work on plantations until 1944, when a peaceful resistance movement took dictator Jorge Ubico from power, and ended the forced labor law. After ten years of democracy, the country once again came under military rule, which lasts to this day. Despite the rights assured by subsequent law to the exploited workers over land, the people from Saquimo Setaña were not actually given a place to settle. GSP accounts that some of its members then traveled to Mexico to work on papaya crops and with the money earned there, in the year 1987, they were able to buy the land where they currently live.

More than twenty years after the purchase, a woman presented herself as heir of the former owner, and demanded that the community move from the land, attempting to disregard the documents that the natives have proving their ownership. Community families claim to have been threatened, suffered physical violence and have their houses burned to the ground by members of the wealthy woman’s family, who has been supported by police and local authorities.

Furthermore, Saquimo Setaña’s most important means of subsistence is brought by cultivating cardamom, but their harvests have been repeatedly stolen. Part of the forest around them has also been cut down.

As a result of such conditions, children in Saquimo have also been negatively impacted, with constant fears that new attacks could happen. Their families are unable to provide for themselves with sufficient sustenance, with no possibilities of trading the usurped cardamom crops.

Peasant leaders and members not only of this community, but all over the country who have been unjustly arrested, report being mistreated by officers, denied food and medicine in prison and pressured to sign false confessions that accuse other national peasant leaders of fabricated crimes. The GSP calls for the release of the people arrested unfairly, including one minor.

GSP also accounts that the community has joined efforts with the Committee of Peasant Unity, as other indigenous and peasant leaders, communities and activists seek to defend themselves, forests and lands from government permissions, personal and corporate interests, the environmental threat of a new dam project, violent attacks and even murder.

The attacks against Saquimo Setaña Community occurred almost at the same time of the release of Q’eqchi national peasant leader, Ramiro Choc, who sat in prison since 2008. Choc was arrested on charges that were proven to be false shortly after his capture.

We express ourselves through loving nature, loving life, loving humans, loving the past, loving the present, loving the future… I, like other comrades who suffer judicial persecution, try to defend humanity. In its entirety, not just the indigenous or garifuna but all human beings. This is our ultimate goal. Ramiro Choc, Q’eqchi leader.

The threatening, violation and denial of the undeniable rights the Q’eqchi have over the land they acquired by their own means so many years ago, together with the stunning violation of basic human rights by evidence of abuse of force, not possibly rested on legal means, are unacceptable crimes and require immediate counteraction by the international community.

The Guatemala Solidarity Project is an organization that has worked in the field for many years striving for peace and justice in Guatemala. They are asking people to write letters and address them to the Guatemalan Embassy in the United States, sign an online petition for the release of unjustly arrested men and in support of the families, and donate for their most urgent needs, as sometimes they have their houses and all the things they could need and possess, reduced to ashes. Their petition can be signed here.

To learn more and take more action, you can visit GSP website at http://www.guatemalasolidarityproject.org/index.htm

The following video gives an important overview of the case, also by GSP, from 2010: A Call to Action in Solidarity with the Community Saquimo Setana