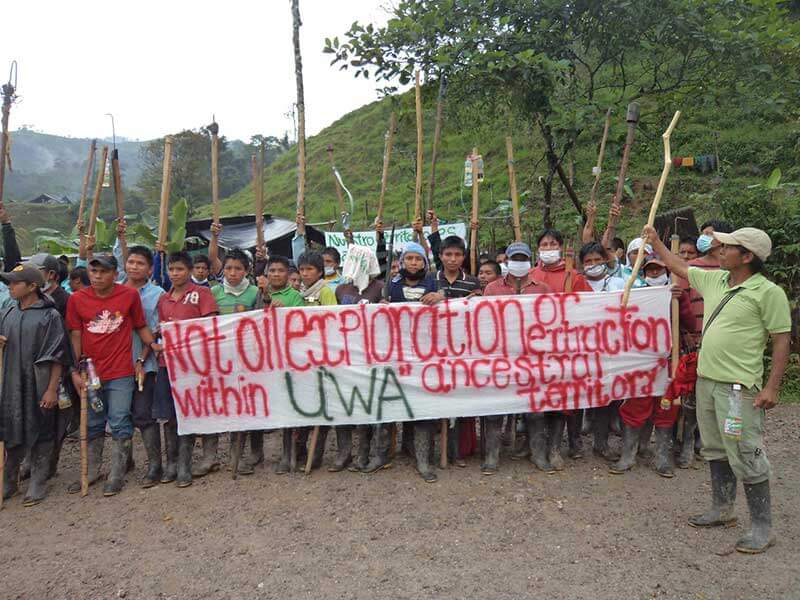 “Today, once more following a long period of silence as we awaited the Colombian government’s compliance with agreements signed on May 1st, 2014, the U’wa people would like to inform national and international public opinion that the Magallanes gas exploration block has been completely dismantled.”
—Association of U’wa Traditional Authorities and Councils (ASOU’WA)

What a difference a year can make! In early 2014, Amazon Watch began receiving urgent alerts from Colombia’s U’wa people about a new threat to their territory. In a public communiqué dated February 26th 2014, the U’wa Association denounced the Magallanes gas exploration project as “an imminent threat to the physical, social and cultural integrity of the U’wa indigenous people, along with [their] environment and ancestral territory.”

Just days before, the U’wa became aware of the “arrival of an avalanche of heavy machinery to the exploration site.” They also saw “an increase of armed forces in the zone, altering the tranquility and wellbeing of the region’s habitants.” Furthermore, the U’wa denounced the presence of illegal armed actors (Colombia’s guerrilla groups), who carry out regular bombings of the oil pipeline that runs through U’wa territory, polluting the sacred Cubogón River with oil waste.

The threat of oil and gas extraction on U’wa territory is not new. The U’wa people became world-renowned in the 1990’s for successfully fighting against Occidental Petroleum’s designs to drill in their territory. The U’wa cosmovision of oil as the “Blood of Mother Earth” captured the global imagination and galvanized an international grassroots solidarity movement.

Fast forward to today. Exactly one year after sounding the alarm, the U’wa are declaring a decisive victory over the Magallanes project. As stated in their latest public communiqué (translated below): “The U’wa people would like to inform national and international public opinion that the Magallanes gas exploration block has been completely dismantled. Ecopetrol S.A. has removed all the machinery that had been found there in a demonstration of respect for our rights as an indigenous people.”

The Magallanes project on August 29th, 2014 before it was dismantled and after on February 20th, 2015

So what happened? Together we’ve hashed out several of the key elements that helped bring about this important victory over the threats imposed by natural resource extraction within U’wa territory:

U’wa resolve: The U’wa continue to reiterate their opposition to any extractive projects within their territory. They nonviolently occupied a bombed oil pipeline site on their territory in March and April of 2014, even at the risk of a forceful government crack down. This leadership has always been the rock-solid foundation of any external support they have received.

Increasing public awareness: U’wa spokespeople were quoted in numerous international outlets including Reuters, the Wall Street Journal , and The Guardian. During a May tour to the United States, legal advisor Aura Tegría was interviewed on the regional TV network NTN24. This coverage sent the signal that the U’wa message continues to resonate far beyond Colombia’s borders.

National backing: A number of Colombian organizations stepped forward to accompany the U’wa cause, including the National Indigenous Organization of Colombia (ONIC) and DeJusticia . They have supported the U’wa with national media coverage and legal assistance, amongst other areas.

International pressure: Global civil society networks in solidarity with the U’wa were reactivated over the course of 2014, led by groups like Amazon Watch and EarthRights International. 28 international organizations signed a letter in June calling for the U’wa’s demands to be respected. The U’wa delivered the letter to high-level government officials.

Why did Ecopetrol decide to dismantle the Magallanes gas project? We might never know the exact mix of factors that tipped the balance. But it’s safe to say the oil company miscalculated the fierce resistance they would reignite within the U’wa themselves and their allies.

As indicated in the latest U’wa communiqué, this victory is important but only one step. Magallanes has been dismantled, but the project has not been definitively cancelled. And there are many other threats on the horizon. The U’wa struggle continues, as does the urgency of international support for their cause.

Today, once more following a long period of silence as we awaited the Colombian government’s compliance with agreements signed on May 1st, 2014, the U’wa people would like to inform national and international public opinion that the Magallanes gas exploration block has been completely dismantled. Ecopetrol S.A. has removed all the machinery that had been found there in a demonstration of respect for our rights as an indigenous people. Once again we reiterate to the national government that this is simply one step of understanding and mutual respect toward the safeguard of our lives as one of Colombia’s ancestral peoples.

This event signifies an important achievement within our process of territorial defense, which was reactivated in 2014. We would like to thank the collaboration, accompaniment and solidarity of organizations and individual defenders of human rights and the environment, in particular the Amazon Watch team who have accompanied our process since the 1990’s.

However, there continue to be serious threats to our territorial integrity. This includes the Caño Limón – Coveñas oil pipeline which continues to have environmental, territorial, spiritual and cultural impacts. It puts at risk the life of the U’wa people in the midst of the armed conflict still being experienced in this region of the country. As if this weren’t enough, the government’s mining and energy policies continue expediting environmental licenses and an accelerated process for interventions within the Sirirí and Catleya oil blocks, found within U’wa territory. Also, mining concessions have been issued within the U’wa Unified Reservation in addition to the most recent mining license approved along the sacred Cobaría River, a tributary which runs through the heart of our titled territory.

We reiterate our call to the Colombian people and to the world that it is necessary to re-evaluate the actions that threaten the life and existence of Mother Earth. We have been one of the indigenous peoples who have foreseen the serious consequences that have begun to manifest themselves given indiscriminate exploitation of natural resources.

Blog originally published at Amazon Watch. Republished on IC with permission from the author.