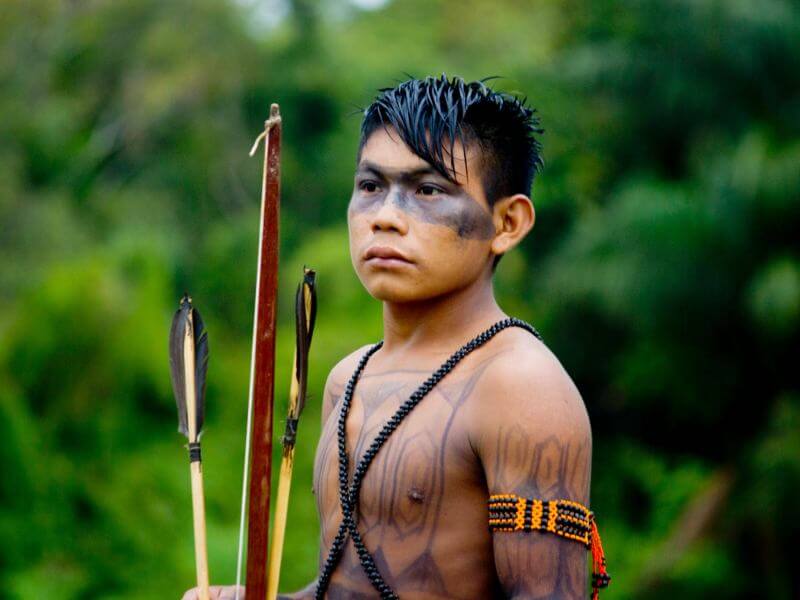 Last week, in a stunning turn of events, Brazil’s environmental agency IBAMA definitively shelved plans to carve the São Luiz do Tapajós mega-dam into the heart of the Amazon. Deeming the project a socio-environmental liability for its devastating impacts upon the lands and way of life of the Munduruku people, IBAMA’s bold move could reflect a major shift away from disastrous mega-projects like the Belo Monte dam.

Such a victory deserves deep recognition, with particular praise for the Munduruku, whose struggle inspired a global movement to save the Tapajós River. Yet such a triumph must be weighed against the grim reality facing Brazil today, as the Amazon and its traditional communities confront a rising tide of existential threats. Only the continued vigilance of frontline defenders and their allies will guarantee that this watershed achievement transforms into enduring protection of the Amazon.

Recognizing that their battle is far from won, General Chief Arnaldo Kabá Munduruku said, “We, Munduruku people, are very happy with the news, this is very important for us. Now, we will continue to fight against other dams on our river.”

The Munduruku’s tireless and innovative efforts to defend their forest home are among the planet’s defining struggles for the rights of indigenous peoples. By demanding the demarcation of their ancestral territory and forging a protocol demanding rigorous consultation on the planned dams of the Tapajós Complex, the Munduruku threw a constitutional roadblock in front of the Brazilian government’s reckless plans.

Meanwhile, a global coalition of allies provided key support to the campaign to stop Tapajós dams, helping to generate a polemic from Brasilia to the United Nations, while demanding the divestment of international corporate dam profiteers like Siemens and General Electric. This confluence of factors mounted formidable resistance that doubtlessly had much to bear in last week’s groundbreaking decision.

The threat is not behind us, however. While the archiving of the mega-dam offers a welcome respite from the immediate threat to the Tapajós basin, the project could reemerge under different circumstances. The president of Brazil’s energy planning company EPE reacted to the dam cancellation insisting its highly flawed Environmental Impact Assessment will be reevaluated in an attempt to salvage the project.

Announcing that he considered São Luiz do Tapajós to be “entirely dispensable,” Environmental Minister José Sarney Filho made the case that energy alternatives like wind, solar, and biomass could amply replace the mega-dam’s projected 8,000 MW electrical output. Such a shrewd assessment, welcomed by environmentalists and energy specialists, is the polar opposite from the thinking that bore Belo Monte, a monumental testament to waste and corruption.

But Sarney Filho also hinted that future environmental licensing of infrastructure projects be streamlined by excluding the analysis of so-called “intervening” agencies that “have nothing to do with the environmental question.” One such agency is the National Indigenous Foundation (FUNAI), whose recommendations concerning irreversible impacts to the Munduruku were key to IBAMA’s shelving of São Luiz do Tapajós. The exclusion of FUNAI from such critical deliberations is unsettling, as it works in tandem with other efforts to cripple or abolish environmental licensing, shredding the essential checks and balances meant to avoid the worst impacts of development projects.

There are reasons to believe that last week’s announcement – so well timed with the opening of the Rio Olympics to a global audience – was an attempt to put a green veneer on a government whose very legitimacy is in question. With champion deforester-turned Agricultural Minister Blairo Maggi helping to lead the attack on environmental protections and his ruralista congressional bloc fomenting a racist legislative assault on indigenous land rights, the true intentions of Brazil’s Executive are far from clear.

In the end, the victory on the Tapajós stems directly from an acknowledgement of the catastrophe befalling the Xingu River and its peoples. As Belo Monte’s disaster unfolds, spawning massive social and ecological consequences and exposing the folly of a mega-project fueled by brazen and lucrative corruption, the Brazilian government cannot afford a similar scenario on the Tapajós. The canceling of São Luiz do Tapajós is therefore a tribute to all those who fought Belo Monte from its inception, and continue to bear witness to its tragedy today.

Let us savor today’s victory for what it is: the recognition of indigenous territorial rights and the protection of one of the Brazilian Amazon’s last, major free-flowing tributaries, its vast forests and rich biodiversity, from an doomed “development” paradigm. Today, on Indigenous People’s Day, may this example serve as a model for things to come, and may those who fought for this victory maintain their vigilance and activism. Sawé!

This article was originally published on Amazon Watch. It has been re-published on IC Magazine with permission.