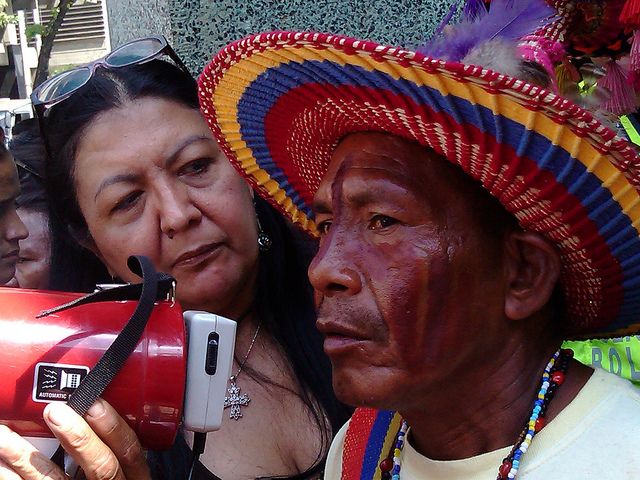 Mérida, 5th July 2013 (Venezuelanalysis.com) – A suspect in the murder of Yukpa chief Sabino Romero was arrested in Caracas on Wednesday, but according to interior minister Miguel Rodriguez Torres, more arrests could be made.

Speaking to state broadcaster VTV, Rodriguez stated that the suspect, identified as Angel Romero Bracho, may have been hired by ranchers to assassinate the indigenous land rights activist.

“According to the information we are handling, 400,000 bolivars were offered for the murder of the Chief Sabino Romero,” the minister told VTV on Thursday. Rodriguez also stated that six suspected collaborators in the murder are currently under investigation by the criminal investigation body CICPC and the national intelligence agency SEBIN.

An outspoken advocate for land rights for the indigenous Yukpa people, Romero had, prior to his death, been involved in an unresolved land dispute with cattle ranchers in the Sierra de Perijá, a mountainous region in the west of Venezuela.

In 2009, the government moved to settle the dispute by declaring the nationalisation of 25 ranches in the region. Despite handing Yukpa communities land titles for nationalised land in October 2009, the government repeatedly delayed compensation payments that had been promised to ranchers, many of which refused to surrender their holdings.

In November 2012, Romero and other Yukpa activists protested in Caracas, demanding the government resolve the dispute and take action against alleged violence from ranchers in the Sierra de Perijá. Romero’s father was one of a number of Yukpa involved in the dispute who were killed in recent years.

On March 3 Romero was gunned down in Zulia state by alleged assailants riding a motorcycle, according to authorities. His wife was also injured.

A joint investigation by SEBIN and CICPC previously detained two suspects, who were released due to a lack of evidence.

Rodriguez stated that the suspect was still being questioned on Thursday, and a forensic investigation into his role in the shooting is ongoing. However, the minister indicated that it is likely the case will go to trial.

“This was a murder that caused great sadness throughout the country, as this Yukpa chief dedicated his life to the defence of indigenous peoples and ancestral territories of Venezuelan native ethnic groups,” he said.

This work by Ryan Mallett-Outtrim / Venezuelanalysis.com is licensed under a Creative Commons BY-NC-ND 3.0 US License.