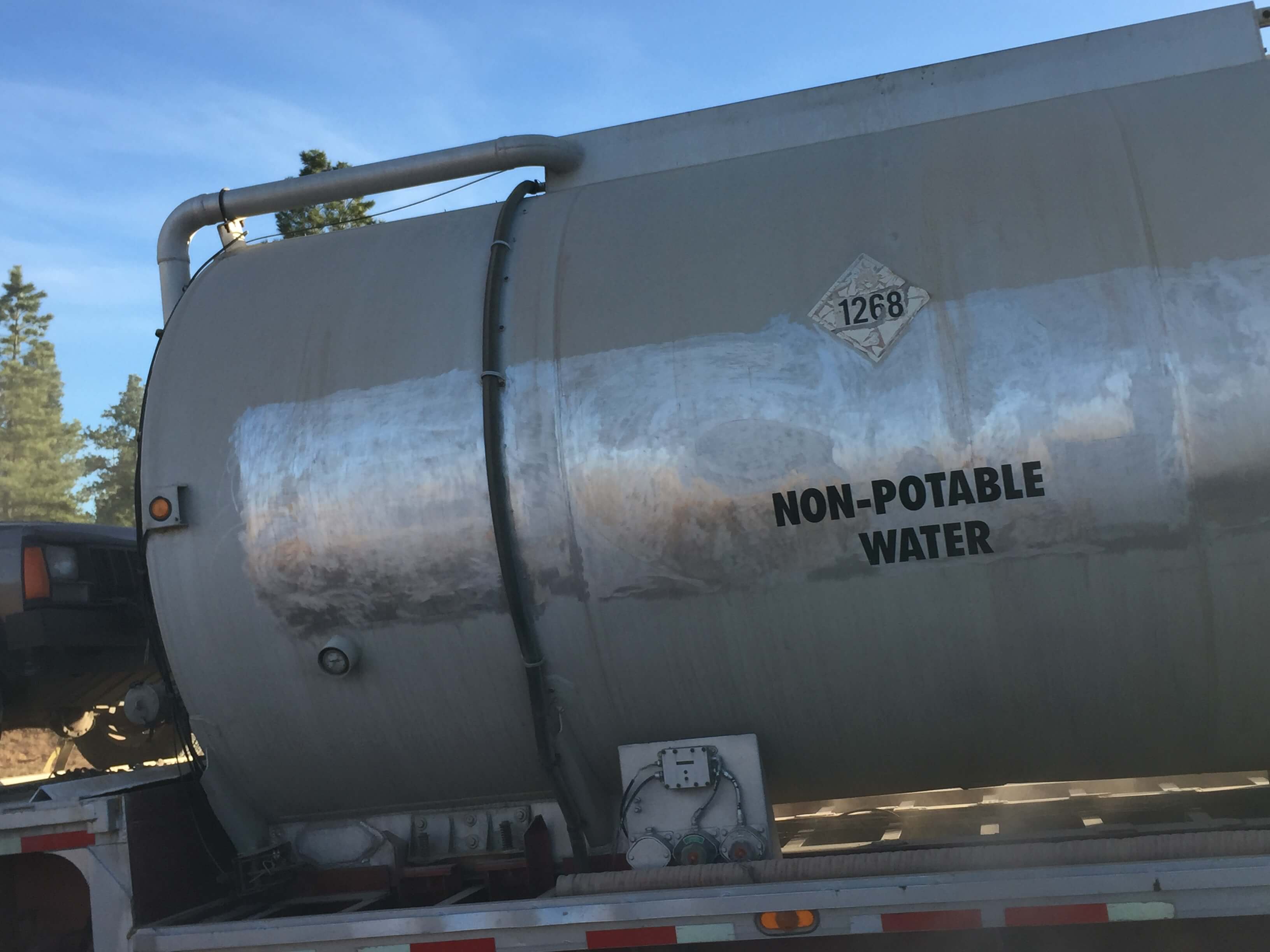 Uranium Mine Near Grand Canyon Filling with Contaminated Water

Mine Operator Energy Fuels Violates Plan of Operations to Clear Out Excess Water; Drilling Continues Despite Expired Environmental Permits
A truck arrives at Canyon Mine to pick up radioactively contaminated water to haul to the White Mesa uranium mill in Blanding, UT. The placard is labelled for petroleum products. Ryan Beam photo.
Support our journalism. Become a Patron!

TUSAYAN, Ariz. – The controversial Canyon Mine, located just six miles from Grand Canyon’s South Rim, is filling with surplus water after a wet winter. In an effort to dispose of the water from the bottom of the mine shaft, mine owner Energy Fuels Resources (USA) Inc. is trucking the contaminated water to the White Mesa Mill uranium processing facility near Blanding, Utah and spraying it, into the air and on the adjacent Kaibab National Forest, in an attempt to evaporate it. The Plan of Operations requires that all excess water be retained in holding ponds and be treated on-site.

Communities on the Navajo Nation along the haul route from Canyon Mine to the White Mesa Mill were not formally notified of hazardous materials being transported. The route traverses 300 miles, with approximately 180 miles going through Navajo Nation and the Ute Mountain Ute community south of the Mill.  The Navajo Nation has a law that restricts transport of radioactive materials, including uranium ore, “over, under or across Navajo Indian Country”[1]; however, Navajo does not have jurisdiction over the state roads of the haul route. Trucks are marked “non-potable water” and at least one truck observed had a placard misidentifying the contents as petroleum products.

Indigenous peoples are not just concerned about the transport, but also Red Butte, a designated Traditional Cultural Property and sacred site, near the mine, as well as risks to precious water resources, possibility of accidents, lack of emergency response, and impacts to human health, plants, and wildlife.

“As Navajo Nation, we have dealt with uranium since the cold war and still dealing with mines left behind by irresponsible people….the last thing we need is for another mine transferring it though our communities….No Haul!” said Milton Tso, Cameron Chapter President.

The U.S. Forest Service did not require Energy Fuels to update its 1986 Plan of Operations to reflect any new information or technology when it began drilling after nearly 30 years on “standby,” where the mine sat and was nonoperational. Now, before the mine has even removed any uranium ore, they seem to be out of compliance with their Plan.

Furthermore, Energy Fuels allowed its permits for the on-site storage of physical material that has been removed from the mineshaft to expire in August 2016.[2] The Arizona Department of Environmental Quality has not received any paperwork from the company for the renewal of the permits.

“This is unacceptable and just confirms many of our concerns about this mine. The mining industry has been saying that mining is cleaner and safer than it used to be, but now the shaft of the mine has been flooded and they had to develop a contingency plan before they’ve even started removing ore. We should not trust this mine or this mining company so close to one of the world’s natural wonders.  They’re putting the waters of Grand Canyon at risk,” said Sierra Club’s Alicyn Gitlin.

Energy Fuels has drilled the shaft to approximately 1,400 feet and has intercepted high-grade uranium ore, although extraction has not yet begun.[3] The water being trucked and sprayed into the air from the mine’s holding pond reportedly contains three times the safe limit of dissolved uranium for drinking water.[4] But it is not known how much of that water has made its way off the mine site. Given the complex hydrology of Grand Canyon, it is also unknown if contaminated water is infiltrating from the unfinished mine shaft into the region’s groundwater, which feeds seeps and springs in Grand Canyon.

“This is another prime example of environmental racism, to allow unregulated transport of radioactive liquids in unmarked trucks through communities and without notifying the public or any of the surrounding indigenous nations. We have a right to know, at the very least, so proper preparations and emergency response are in place in case of a spill or accident,” said Leona Morgan with Haul No!, an indigenous-led initiative concerned about uranium transport.

One of these mines, Canyon Mine, was originally approved in 1986, but mine owners ceased development in 1992 when the price of uranium dropped. In 2010, Red Butte near Canyon Mine was designated a Traditional Cultural Property. In 2012, the Kaibab National Forest decided Canyon Mine could restart development without updating its Environmental Impact Statement or Plan of Operations. The Havasupai Tribe is fighting the Forest Service’s decision in the 9th Circuit Court of Appeals to force the Forest Service to consider new information and technology, and to require consultation with the tribe under the National Historic Preservation Act.

In a letter dated March 17, 2008, regarding “Notice of ADEQ Decision to Deny a Type 3.04 General Aquifer Protection Permit (APP) to Denison Mines (USA) Corp, Canyon Mine Facility,” the ADEQ wrote “. . . it has been determined that your facility does not meet the design, construction and installation requirements for a Type 3.04 General Permit pursuant to A.A.C. R18-9-D304(A) and A.A.C. R18-9-D304(C).” In an article in the Arizona Daily Sun, ADEQ Director Steve Owens said, “The burden is on them to prove to us that there will not be an impact on groundwater.”[5] Yet, in a complete about face, in 2009 a general Aquifer Protection Permit was granted for Canyon Mine.

When Energy Fuels Resources (USA) Inc. purchased Canyon Mine, it transferred the Type 3.04 General Aquifer Protection Permit for a non-stormwater impoundment, and two Type 2.02 General Aquifer Protection Permits, which allow intermediate ore stockpiles, into its name.  The Type 3.04 permit expires August 31, 2019, and the Type 2.02 permits expired August 30, 2016.[6]  ADEQ does not have any new paperwork in process or on file to renew the Type 2.02 permits, yet Canyon Mine continues to develop its mine shaft and to stockpile the overburden onsite.

In 2010 water samples summarized by the USGS showed that 15 springs and five wells contained dissolved uranium concentrations in excess of the Environmental Protection Agency’s standards for safe drinking water. The USGS report concluded that these contaminated sites “are related to mining processes.” In 2013 the National Park Service said that the “regional aquifer groundwater wells at the Canyon, Pinenut, and Hermit mines as well as the sumps at the base of Pigeon and Hermit mines have all exhibited dissolved uranium concentrations in excess of drinking water standards (30 micrograms per liter), with sump concentrations at Hermit Mine exceeding 36,000 micrograms per liter.”

According to Canyon Mine’s 1984 Plan of Operations, “All surface drainage from the yard will flow into the pond or ponds. In addition, if excessive water is encountered in the course of mining it will be stored and treated in this area prior to discharge…All water encountered during mining which cannot be utilized in connection with mining will be discharged into these holding ponds and held until it evaporates or treated until it meets the discharge standards applicable under the NPDES permit.”[7]

The 1986 Final Environmental Impact Statement for Canyon Mine requires, “Holding pond(s) in the mine yard must be adequate to receive local runoff from a 100-year thunderstorm event, plus normal annual runoff and water that may be pumped from the mine. The volume of water in the pond(s) must be maintained at a level that will allow a reserve pond capacity to accommodate unforeseen and normally expected runoff events.”[8]  The holding pond clearly was not able to handle water pumped from the mine this year.