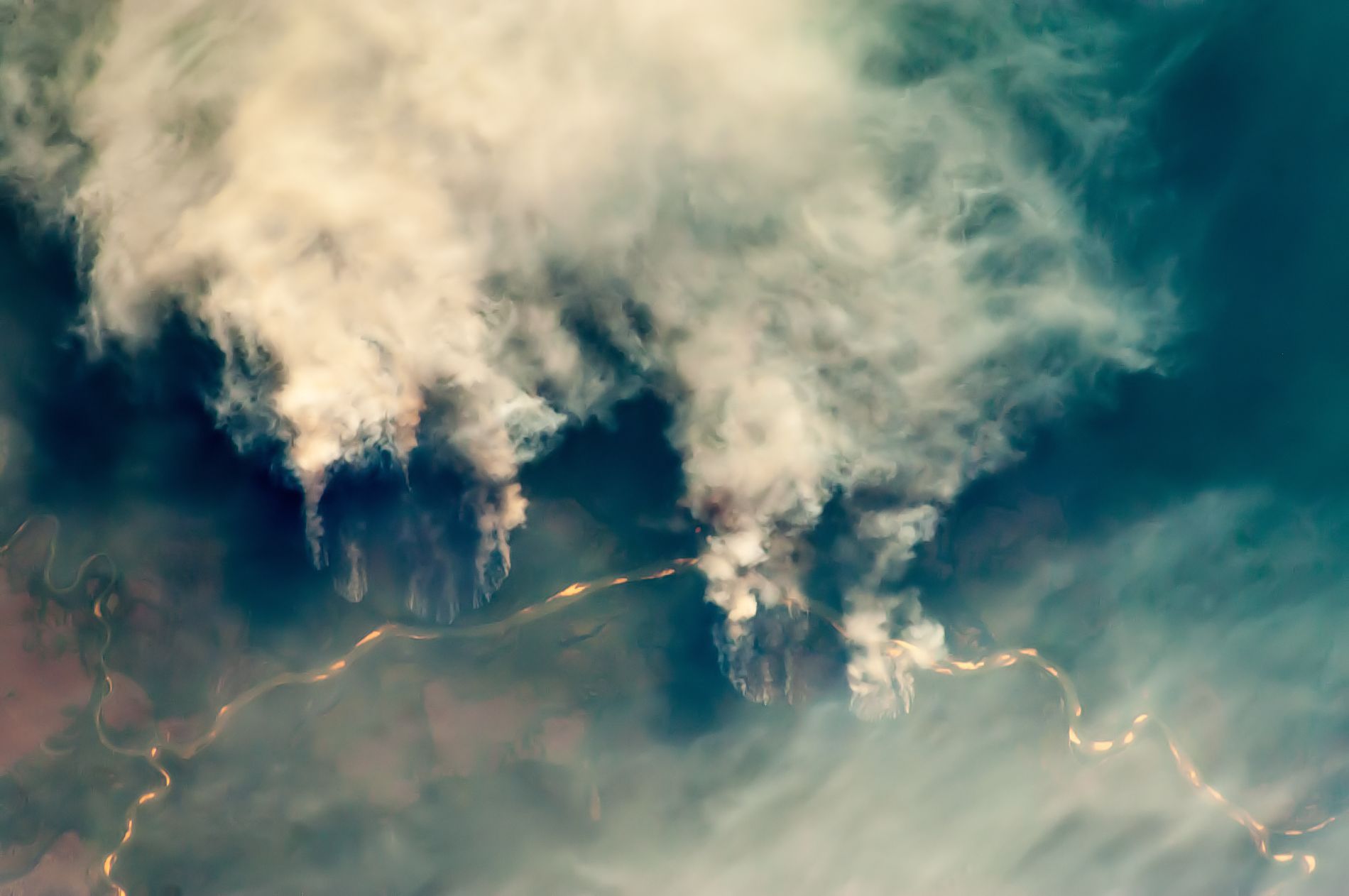 Smoke plumes in the Amazon.
Support our journalism. Become a Patron!

A landmark United Nations report released Thursday warns that land worldwide is under mounting pressure from humans—both exacerbated by and contributing to the climate crisis—which underscores the need to urgently enact more sustainable land practices and curb greenhouse gas emissions from all sources to keep the global population fed and ensure a habitable planet in the future.

The Special Report on Climate Change and Land (SRCCL) comes from the Intergovernmental Panel on Climate Change (IPCC), a U.N. body that assesses science related to the climate crisis. The report’s Summary for Policymakers (pdf) was agreed on by world governments at a meeting in Geneva earlier this week and published Thursday.

“Land plays an important role in the climate system,” Jim Skea, co-chair of IPCC Working Group III—which focuses on mitigating climate change—explained in a statement. “Agriculture, forestry, and other types of land use account for 23 percent of human greenhouse gas emissions. At the same time natural land processes absorb carbon dioxide equivalent to almost a third of carbon dioxide emissions from fossil fuels and industry.”

In other words, when it comes to the human-caused climate emergency land use is part of the problem—and part of the solution.

As Susan Casey-Lefkowitz wrote in a blog post for Natural Resources Defense Council (NRDC) Thursday, the SRCCL signals that “the world must take immediate action to transform the way we use our land—forestry, agriculture, industrial, and urban development—in order to avoid a climate catastrophe.”

Land is where we live.
Land is under growing human pressure.
Land is a part of the solution.
But land can’t do it all. #SRCCL press release ➡️ https://t.co/yvthAXgk7V
SPM ➡️ https://t.co/kIjgQJt7hP pic.twitter.com/x9KxDgTJWH

“This is a perfect storm,” Dave Reay, a professor at the University of Edinburgh who was an expert reviewer for the IPCC report, told The Guardian. “Limited land, an expanding human population, and all wrapped in a suffocating blanket of climate emergency. Earth has never felt smaller, its natural ecosystems never under such direct threat.”

As the The New York Times reported, the 107 scientists from 52 countries who authored the SRCCL “found that the window to address the threat is closing rapidly.”

A half-billion people already live in places turning into desert, and soil is being lost between 10 and 100 times faster than it is forming, according to the report.

Climate change will make those threats even worse, as floods, drought, storms, and other types of extreme weather threaten to disrupt, and over time shrink, the global food supply. Already, more than 10 percent of the world’s population remains undernourished, and some authors of the report warned in interviews that food shortages could lead to an increase in cross-border migration.

A particular danger is that food crises could develop on several continents at once, said Cynthia Rosenzweig, a senior research scientist at the NASA Goddard Institute for Space Studies and one of the lead authors of the report. “The potential risk of multi-breadbasket failure is increasing,” she said. “All of these things are happening at the same time.”

In a statement, Priyadarshi Shukla, co-chair of IPCC Working Group III, warned that certain regions of the world are especially at risk because of rising temperatures.

“Food security will be increasingly affected by future climate change through yield declines—especially in the tropics—increased prices, reduced nutrient quality, and supply chain disruptions,” Shukla said. “We will see different effects in different countries, but there will be more drastic impacts on low-income countries in Africa, Asia, Latin America, and the Caribbean.”

While the IPCC report’s findings are dire, its authors are hopeful that the conclusions will spur global action to improve land management with the dual aims of combating global heating and hunger.

“One of the important findings of our work is that there are a lot of actions that we can take now. They’re available to us,” Rosenzweig told the Times. “But what some of these solutions do require is attention, financial support, enabling environments.”

Casey-Lefkowitz, in her blog post for NRDC, outlined the solutions offered in the report. “To mitigate climate change, save wildlife, and secure our food supply, we need transformative change to our economy and our current practices,” she wrote.

Debra Roberts, co-chair of IPCC Working Group II—which focuses on the vulnerability of socio-economic and natural systems to climate change—explained that “some dietary choices require more land and water, and cause more emissions of heat-trapping gases than others.”

The @IPCC_CH just launched the #SRCCL Report on #ClimateChange & Land!

Integrated solutions across sectors are key.

"This calls on us to think across the entire #food production chain—to tackle complex issues in complex areas."
—Debra Roberts, Authorpic.twitter.com/rvcNS3kcUY

The report emphasizes the necessity of global coordination not only to promote plant-based diets and sustainable agriculture for the sake of the planet but also to address food security, nutrition, and hunger.

Responding to the IPCC’s findings about the climate consequences of corporate factory farming and industrial meat production, Food & Water Watch executive director Wenonah Hauter said in a statement, “Our industrial agricultural system is bad for consumers, bad for family farmers, and bad for our climate.”

“We need to reform our agricultural system by ending the strangle-hold a handful of multinational corporations have over our vast food economy in America,” added Hauter, whose group is U.S.-based. “It’s time to end factory farming, once and for all. At the end of the day, there is nothing more important than clean, healthy food and water, and a sustainable vision for our environment and our future.”

It almost seems like food is essential. Perhaps we should pay some heed. https://t.co/mA5Dckurxt

The IPCC report also emphasizes the need to stop deforestation and the importance of recognizing and protecting the land rights of Indigenous communities that are fighting—and often risking their lives—to defend their local environments from destructive corporations and governments.

“Finally, the world’s top scientists recognize what we have always known. We—Indigenous Peoples and local communities—play a critical role in stewarding and safeguarding the world’s lands and forests,” a coalition of organizations from 42 countries said in a joint statement Thursday. “We have cared for our lands and forests—and the biodiversity they contain—for generations. With the right support we can continue to do so for generations to come.”

Emboldened by the IPCC’s acknowledgement, the Indigenous groups issued six demands of global governments, the international community, and the private sector:

Andreia Takua Fernandes, frontline organizer for Indigenous communities at 350.org—which was not part of the joint statement—said Thursday that “although we Indigenous Peoples suffer the effects of climate change before other people and are under constant attack from invaders and even our own governments, we continue to protect our lands and the biodiversity within them.”

“We do so for the well-being of our communities, but also of the entire planet, because we know that the land degradation that affects us in Brazil will also impact the lives of people in China, in Africa and elsewhere in the world,” she said. “It’s key that our voices are heard in the conversation about solutions for the climate crisis and for deforestation, as we have been showing for centuries how true is the message that everything on Earth is connected.”

Mahir Ilgaz, research and grants coordinator at 350.org, highlighted another takeaway from the report: renewed confirmation that the world must stop using dirty energy sources.

“Unless we start substantially reducing fossil fuel use now and go completely fossil free, the combination of climate change and land degradation will lock even more people into poverty and exposure to climate impacts,” said Ilgaz. “The more carbon dioxide and methane we emit now, the higher the risks of breakdown in our food systems, especially in vulnerable areas. Continuing investments in fossil fuels and fossil fuel extraction, at this point, equals indirectly starving poor people.”

The SRCCL follows the IPCC’s 1.5°C report from October, which called for “rapid, far-reaching, and unprecedented” reforms to human behavior on a global scale to avert climate catastrophe. A special report on the ocean and the cryosphere in a changing climate is scheduled to be released in September.

This article was originally published on Common Dreams. It has been re-published at IC under a Creative Commons License.