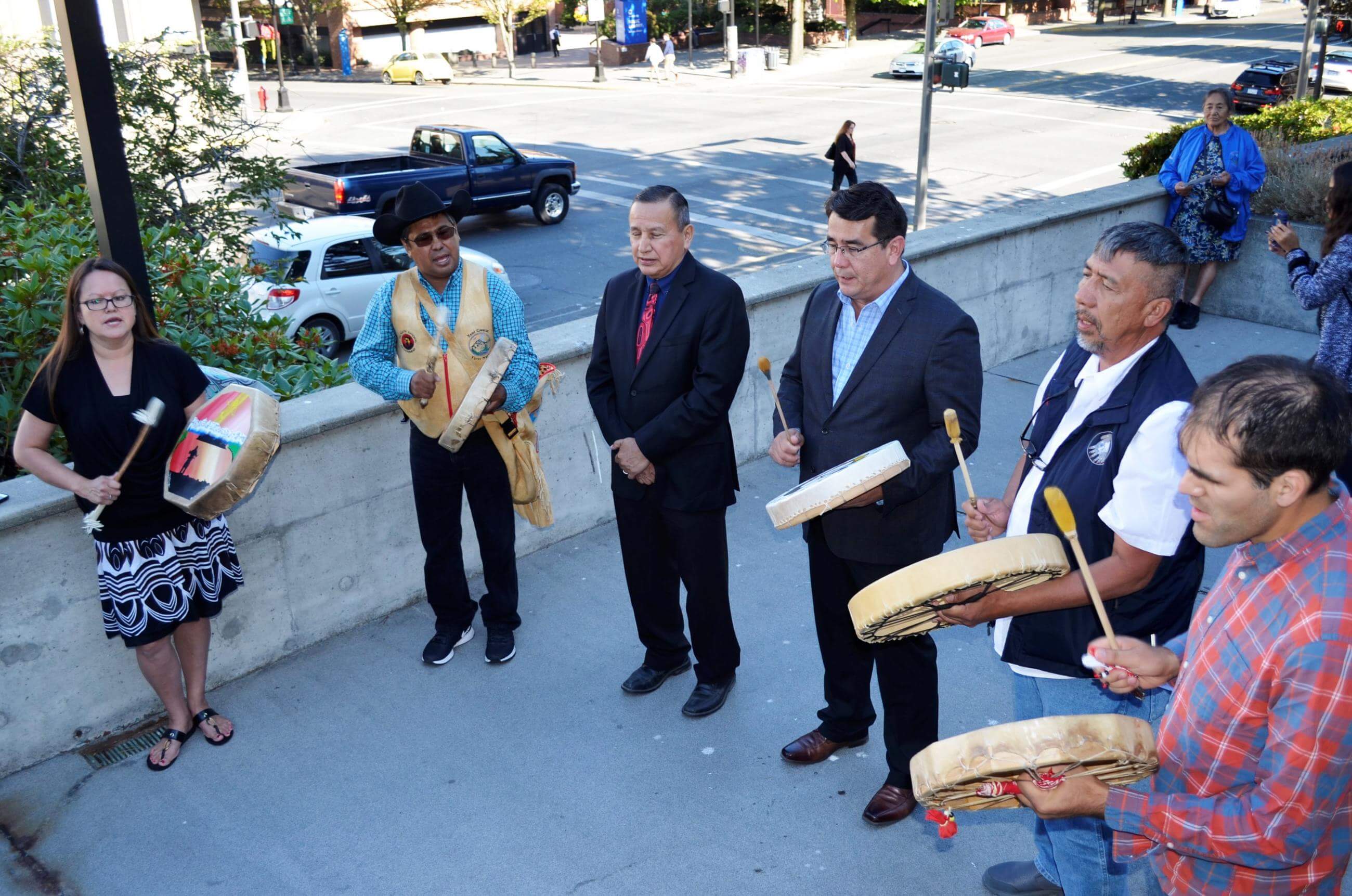 Tsilhqot’in Nation Files for Injunction to Halt Taseko Mine Drilling

Photo: Tsilhqot'in leaders drum at a rally outside of the British Colombia Supreme Court. Photo by Sierra Club BC
Support our journalism. Become a Patron!

On July 31st, 2017, the Tsilhqot’in Nation went to the BC Supreme Court to challenge the drilling permits that were recently issued to Taseko Mines Limited, a Canadian mining company who has been pushing for a copper mine in the area. The Tsilhqot’in National Government (TNG) filed a petition to rescind the permit due to its neglect of the responsibility to consult and accommodate the Tsilhqot’in Nation before approval. Additionally, TNG filed a Notice of Civil Claim against the permits, noting that it infringes upon the Tsilhqot’in Nation’s right to the land for hunting, trapping and fishing. Finally, TNG asked the BC Supreme Court for an injunction to halt the work that Taseko is attempting to do at the site. The decision on the injunction is expected on August 14th, and, until then, Taseko has agreed to halt drilling.

This battle between the Tsilhqot’in Nation and Taseko Mines Limited has been ongoing for two decades. The company has been attempting to construct a mine that would produce 70,000 tons of ore per day for 20 years. However, this plan has been rejected by the BC government twice before, in 2012 and 2014, as a result of the opposition and strong organization by the Tsilhqot’in Nation and the general public. In 2014, the government upheld that the area in question is Tsilhqot’in lands, and that any economic development that would take place on these lands must have the consent of the First Nation. Regardless of this federal decision, on July 14th, 2017, a permit was issued to Taseko Mines, authorizing Taseko to clear lands, excavate test pits, drill 122 holes, and construct roads. The permit was sanctioned while the Indigenous Peoples of the Tsilhqot’in Nation were evacuating their homes due to wildfires raging across their lands.

“Our people are understandably angry, and cannot believe that BC would approve more destruction in an area of such spiritual and cultural importance for us, and in Xeni Gwet’in’s trapline, an area with one of Canada’s only Court Declarations of Aboriginal Rights. We are confident that the BC Supreme Court will hear our concerns and grant an injunction against any drilling activity by Taseko. The BC NDP have inherited this mess from the previous government, and we hope they will act to make things right.” Chief Roger William, Chief of the Xeni Gwet’in First Nations Government and Vice-Chair of the Tsilhqot’in National Government

Taseko is looking engage in extensive, destructive exploratory work in the area. This includes 76 km of road and trail, 122 drill holes, 367 test pits (dug by an excavator), and 20 km of seismic lines in an area of profound cultural importance to the Tsilhqot’in Nation. On Friday, July 28th, the Canadian Environmental Assessment Agency wrote Taseko Mines Ltd., declaring that the drilling program is illegal under the Canadian Environmental Assessment Act, 2012. But whether the provincial government and Taseko will respect these laws is to be seen.  Sustained community oragnizing and public opposition to the project is essential to implement court decisions.

Now, the Tsilhqot’in are again asking for public support against the mine.

The Tsilhqot’in Nation in British Colombia, Canada, issued an urgent request for people around the world to join them in the fight to protect their home, lands, and sacred waters from a gold and copper mine  that would turn the sacred Teztan Biny or ‘Fish Lake’ in the heart of Tsilhqot’in territory, into a tailings pond for toxic waste.

The lake is home to 85,000 rainbow trout, and provides clean water for drinking, irrigation, and millions of salmon which supports a thriving ecosystem and economy for the region. Tsilhqot’in Elder Sonny Lulua explained in an affidavit, “There is so much at stake for us….It hurts our culture when it changes like this or when we can’t go in there. It is a threat to our survival. [That area] was made for us to live off of, for hunting and trapping and medicines”.

The Tsilhqot’in National Government has asked people around the world to hold up a feather to demonstrate your solidarity with the fight to #SaveFishLake.

“The eagle feather is for the truth, it’s for protection, it’s for guidance, it’s for courage. So we pray to the creator through this eagle feather. We ask everyone to come together with the strength of the eagle feather, in unity, to protect our lands and resources.” Chief Charlene Belleau