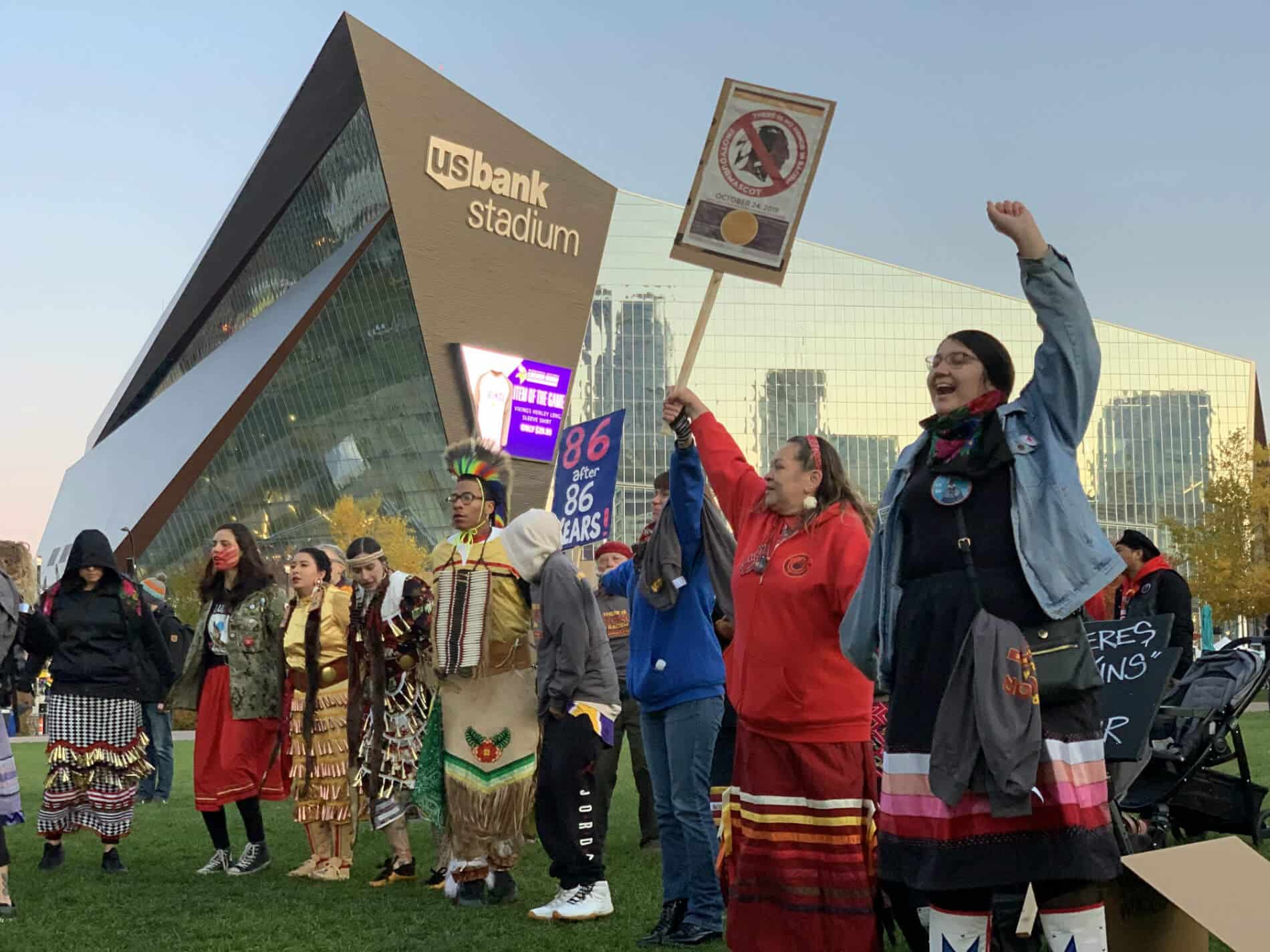 For nearly three decades, the month of November has been recognized as Native American Heritage Month. Bipartisan support through Presidential Proclamations and law formally recognized and honored the contributions of Native and Indigenous peoples throughout the month. This year, however, the 45th President of the United States attempted to rebrand the month entirely, prioritizing an inaugural proclamation of November as “National American History and Founders Month.” While it is not certain why this decision was made, recent reporting on this inaugural proclamation found it to be a priority of prominent Republican donors. The White House retroactively published a proclamation about Native American History Month on November 5th, but the message was heard loud and clear throughout Indian Country: This administration is trying to erase us.

In an era of alarming displays of support and sympathy for white nationalism coded as patriotism, we recognize that the decision to prioritize the celebration of “founders” by the President, with a purposeful exclusion of Native communities, is a direct effort to diminish both tribal sovereignty and growing social movements for justice, equity, and inclusion. This action was an attempt to further diminish Indigenous Peoples in our own land and an attempt to erase us from discussions about this country’s origins.

While the highest levels of government have and continue to be both active and complicit in the attempted erasure of our people, they are not alone. Erasure is institutionalized by other sectors in society, including the K-12 public education system, pop culture, and the media. Formally recognized holidays and proclamations like Native American Heritage Month are key to addressing this erasure, and correcting historical and institutionalized narratives that have privileged white colonial history while purposely excluding the history of those who have been most disenfranchised: Indigenous, Black, and other people of color.

It is no surprise to Native people that a president who uses Native-specific racial slurs to talk about his political opponents, supports the expansion of pipelines through tribal lands despite opposition by tribal leaders, and hijacks celebrations of Native veterans, has disrespected us yet again. There has been a consistent pattern of disregard for the strength and well-being of Native communities, most prominently shown through proposed cuts to funding, and even elimination of Native education programs.

To be sure, Indian Country has long-standing allies from both sides of the aisle who have worked side-by-side with tribal communities to right some wrongs perpetrated by the government. Both Republican and Democratic elected officials have introduced legislation that supports Native communities, advocated for full funding of Indian education and health services, held agencies accountable to their missions of serving Native communities, and worked with elected officials to ensure they consult with tribal leaders. Support for Tribal Nations and Native people can and should be a collective effort of all those in government, regardless of political affiliation.

The acknowledgement and celebration of Native American Heritage Month is an opportunity for America to reckon with its past, to heal long-standing historical wounds, to build national self-awareness, and fully realize what it means to be a nation built on justice and equity for all people. This should be a priority to those in the highest levels of leadership.

Despite this latest slight to Indian Country by this Administration, Native and Indigenous movements for justice and visibility are mobilizing in unprecedented ways. Looking back to the month of October, wherein dozens of Indigenous Peoples’ Day declarations were made on local and state levels, we recognize the growing power of Indigenous organizing for visibility and self-determination. Together, we are boldly asserting ourselves. We are reclaiming our narratives, restoring the visibility of our Nations, our histories, and our accomplishments. 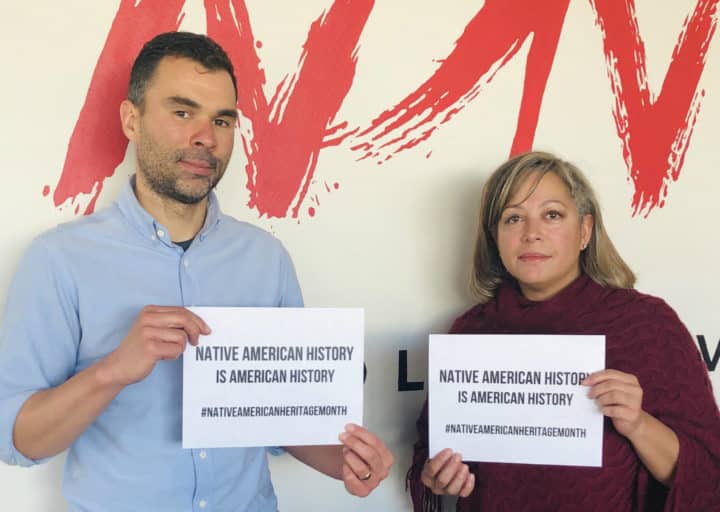 IllumiNative was founded to combat the erasure of Native peoples, to change the narrative, and illuminate what it means to be Native American in today’s contemporary society. We celebrate Native peoples this month and every month by amplifying Native artists, Native issues, voices for change, and by providing significant, sound research to build the foundation of truth for all Native peoples in this country.

Similarly, the NDN Collective was founded to build the collective power of Indigenous people through movement-building, decolonization and self-determination. Asserting ourselves as the original inhabitants of this land is not just critical for our own collective well-being, healing and self-determination as Indigenous people, but it’s part of a much broader movement for justice and equity for all people and the planet. We recognize that as human beings upon one shared Earth, we are bound by natural laws of interdependence. Therefore, we must take every opportunity to stand up to inequality and create equitable solutions.

As organizations, we share a commitment to fighting erasure. As Native people, we understand how critical this fight is to our future. Indigenous Peoples are an essential part of the historical and cultural fabric that makes up this nation. We remain and persevere as active participants of the present, and we will continue to be co-creators of the future. On a global scale, the perspectives and experiences of Indigenous Peoples and Nations are also essential to solving the most pressing problems facing this country and the world. Indigenous communities are leading the fight to end climate change and ensuring access to clean water and air. It is imperative that we build a future and country that is grounded in truth, solidarity, justice and equity. A country that works for and includes all. A country where Indigenous Peoples, as the original people of this land, are valued, respected and recognized.

Some may call the celebration of Native American Heritage Month merely a symbolic gesture. But symbols and the movements behind them matter. Accurate representation and the movement for narrative change are catalysts for change. This is why we will continue fighting for visibility and the restoration of celebrations like this one. This month, we will continue to honor and recognize the countless displays of Native and Indigenous magnificence and celebrate over 600 years of resilience. We will continue to build within our communities, lift up our stories, and work with allies to reshape an American narrative that truly honors the first people of this land. Together, we can create a vibrant future for this country that exemplifies the best in all of us and defeats the hate that threatens to surround us today.

Crystal Echo Hawk, Pawnee is the Founder and CEO of IllumiNative.

Nick Tilsen, Oglala Lakota, is the President and CEO of NDN Collective.