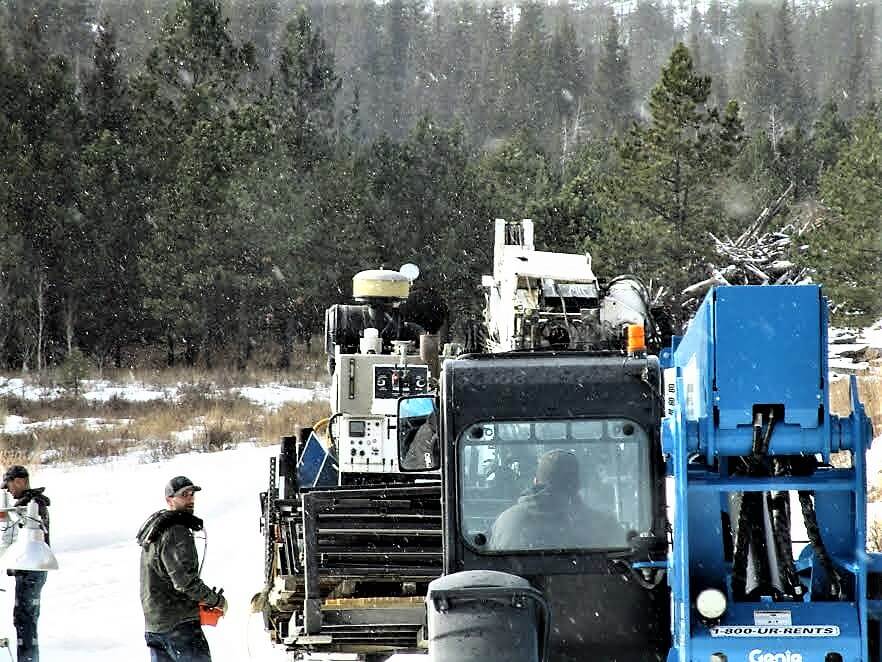 Men work with forklift and drill rig to begin gold prospecting on the banks of the Mniluzahan Wakpa (Rapid Creek) near Rochford and Pe’ Sla tribal trust land located in the Black Hills about 25 miles upstream from the Pennington County seat of Rapid City. COURTESY / Black Hills Clean Water Alliance
Support our journalism. Become a Patron!

Above: Men work with forklift and drill rig to begin gold prospecting on the banks of the Mniluzahan Wakpa (Rapid Creek) near Rochford and Pe’ Sla tribal trust land located in the Black Hills about 25 miles upstream from the Pennington County seat of Rapid City. COURTESY / Black Hills Clean Water Alliance

RAPID CITY – As prospectors’ drill rigs moved in on the Rochford Gold District adjacent to the Lakota sacred site of Pe’ Sla on Feb. 6, tribal constituents warned the Pennington County Board of Commissioners that Black Hills mining proposals should require consultation with the authorities of the Great Sioux Nation.

The board of commissioners, listening to the testimony from Rosebud and Oglala tribal members, as well as others at its regular meeting, voted to delay a first reading of the planning commission’s proposed mining ordinance amendments until a Feb. 13 special meeting for further public comment.

The ad hoc Magpie Women’s Council subsequently scheduled a prayer walk to the meeting from the bandshell on the banks of the Mniluzahan Wakpa (Rapid Creek) to “call attention to efforts to mine in the Black Hills,” using water from the creek upstream from Rapid City. 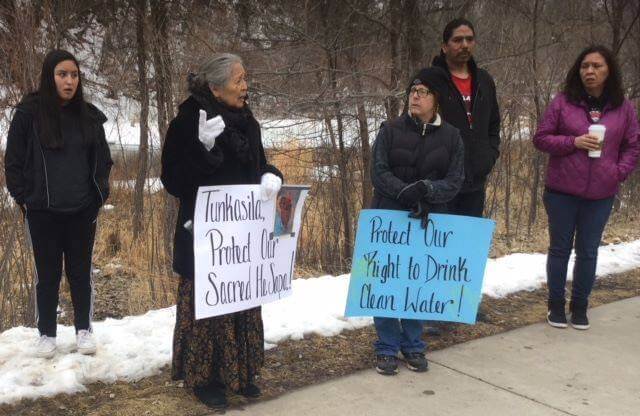 During a prayer walk March 4 to protect water from gold prospecting and mining in the unceded 1868 Ft. Laramie Treaty’s Lakota Territory of the sacred Black Hills, participants paused along their route beside Rapid Creek, or Mniluzahan Wakpa. COURTESY/Jean Leach via Black Hills Clean Water Alliance

The Rosebud Sioux Tribe opposes the exploratory drilling for gold on lands near the sacred Pe’ Sla, “based upon continuing violations of the 1868 Treaty of Fort Laramie provisions and upon the threat of toxic mining waste pollution into the water and environment surrounding Pe’ Sla,” Phil Wanbli Nunpa, executive director of the Sicangu Lakota Treaty Council, told commissioners.

He quoted from a tribal resolution that Rosebud Sioux Tribal President William Kimble sent for inclusion in the county records and the U.S. Forest Service process that would determine Pe’ Sla area exploration permit locations on public land.

Pe’ Sla, the “Heart of Everything,” is a high mountain meadow central in the Oceti Sakowin cosmovision. Due to its crucial cultural role within the Black Hills, the Seven Council Fires of the Great Sioux Nation paid $9 million to buy back the 2,000-acre Reynolds Ranch occupying it, then put the land into tribal jurisdiction under federal trust status.

According to the 1868 Ft. Laramie Treaty between the United States and the Great Sioux Nation, the Black Hills, including Pe’ Sla, still belongs to the Lakota, Dakota, and Nakota tribes, as do all lands in South Dakota west of the Missouri River and some lands in four adjoining states.

A 1980 U.S. Supreme Court decision affirmed that the tribes’ jurisdiction had been illegally usurped, offering a monetary compensation. The tribes rejected the payout and have lobbied since then for a settlement to return the portion of the Black Hills that is under federal management.

Now, Mineral Mountain Resources Ltd., based in Vancouver, British Columbia, Canada, has consolidated a block of claims between Rochford and Pe’ Sla. It is starting to prospect in a venture it anticipates will be as profitable as the famed Homestake Gold Mine in nearby Lead.

The mine “moved several large hills, and left behind a huge crater, a contaminated river, and a Superfund site,” the grassroots Black Hills Clean Water Alliance said Feb. 7, in rallying constituents to request that South Dakota Gov. Dennis Daugaard, as well as Environment and Natural Resources Secretary Steven Pirner, revoke the exploration permit.

“The current staging area is not in the place that the company said it would do its staging, and we believe it might be illegal,” the alliance said.

The company’s South Dakota subsidiary obtained a state permit transfer Jan. 18 for drilling 33 holes on some 7,500 acres in Pennington County at the Rochford Gold Project.

The company also obtained a temporary state water rights permit renewal for its drill rigs on Jan. 2, enabling it to withdraw 1.8 million gallons from the Mniluzahan Wakpa, at a pump rate of 200 gallons per minute, through the end of April.

Pennington County’s moratorium on mining expires that month, prompting the insertion of wording in the new county ordinance amendments to provide oversight on minerals, such as gold, uranium and vanadium, at existing claims.

Citizen involvement in the crafting of the amendments convinced county elected officials to create a new committee to follow up on work done by the previous one they formed to oversee many months of work on the latest amendments.

It failed in the House Natural Resources Committee on Feb 5. However, another bill they introduced about the mining, HB 1224 was scheduled for hearing on Feb. 12 in the House Commerce and Energy Committee.

It states, “No mining for the purpose of extracting minerals, drilling for the purpose of exploring for minerals or resources, fracking, or any other extraction method may occur within the boundaries of the Black Hills, unless consent is given, by resolution, by each of the federally recognized Indian tribes in the state of South Dakota.”

Cheryl Angel, a tribal cultural surveyor born in the Black Hills, was one of the first speakers of many at the commission meeting to urge establishment of mining rules to retain local control over water and reinforce federal recognition of the tribes’ sovereignty in matters of historic preservation.

“So, they work with the Department of Natural Resources and the SHPOs sign off, then they get their permit. But they don’t go through the Tribal Historic Preservation Officers, and they should.” 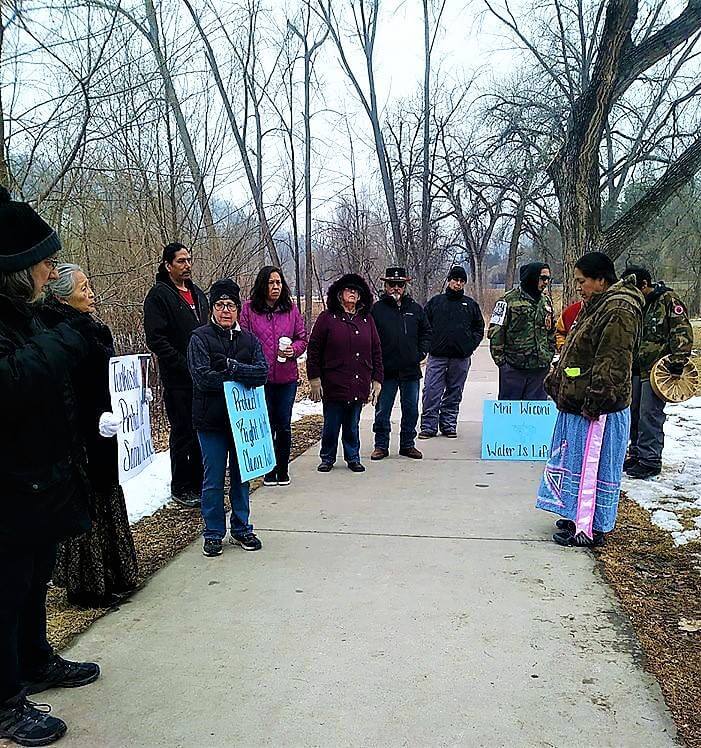 “We are the indigenous people of the Black Hills and we have very historical places here that aren’t being recognized, so we’re trying to get that in the Pennington County commissioners’ mining ordinance.”

It adds wording to existing law to require that “the state or any political subdivision of the state, or any instrumentality thereof, may not undertake any project which will encroach upon, damage or destroy any historic property included or eligible for inclusion in the national register of historic places or the state register of historic places until the State Historical Society and the tribal historic preservation officer has been given notice and an opportunity to investigate and comment on the proposed project.”

Regina Brave, also an Oglala Lakota, said the county “should have the first say-so over what we want here, or don’t want, because there’s a lot of residents whose water is going to be affected and the mining will affect the aquifers there that are feeding into Rapid City from mine areas.”

“I’m concerned about the farmers and ranchers and if their water is contaminated, because of the thousands of gallons that would be required in the mining or even in the exploration.

Due to the current absence of a county ordinance for hard-rock, underground, open pit or aquifer exploration and mining, residents have been caught unaware of the large-scale operations underway. Rapid City resident Rick Bell noted.

“I was out hiking the Rochford area, and there are a lot of people who don’t have any idea what’s coming their way in terms of just disruption. If they don’t know about mining rights below their property, they’re gonna get destroyed, and this is such a beautiful area,” he said.

“Again, our Native American brothers and sisters find it very sacred, and I just hate that Mineral Mountain Resources mining company has said they’re gonna make another Homestake Mine out of this area,” he added.

“If that happens, we have to have enough regulations to really either contain this or stop it.”

Another Rapid City resident, Gena Parkhurst suggested that all commercial mining in Pennington County be subject to conditional-use permit approval by the County Board of Commissioners.

“New mines should not have automatic rubber stamp approval,” she added.  “The county commission should have some flexibility to address new issues and apply new conditions not envisioned by drafters of this ordinance.”

Prairie Hills Audubon Society President Nancy Hilding agreed and told commissioners: “We hope that you will keep discretion” in permitting decisions. The ordinance should provide that public appeals of permit approvals are automatically granted, she added.