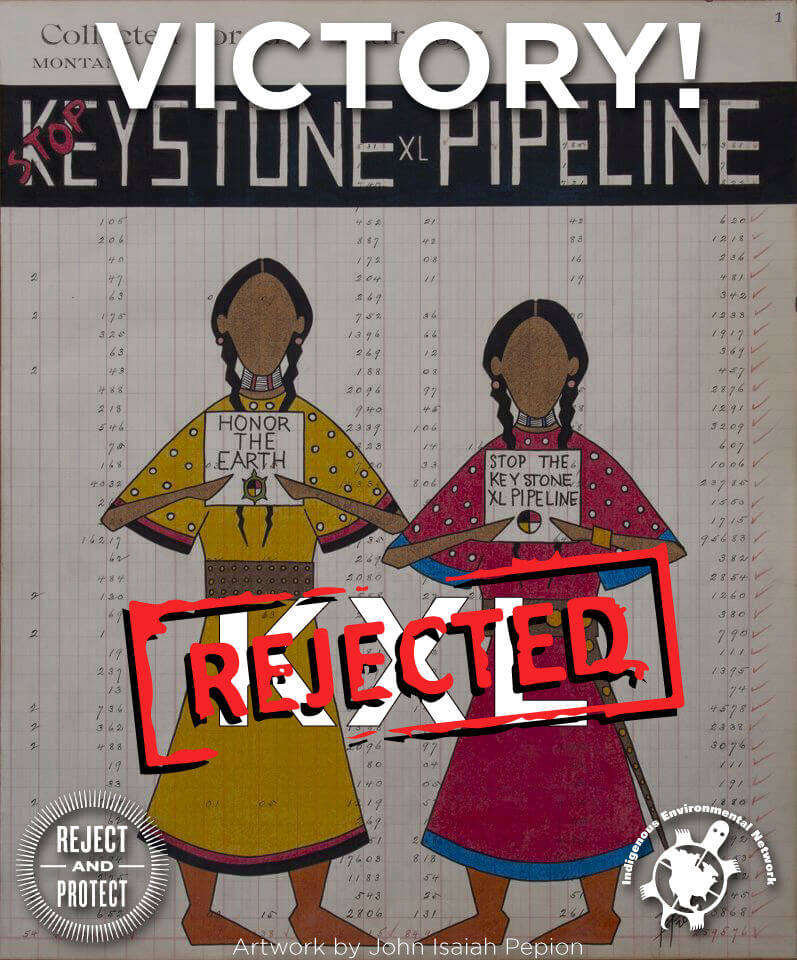 Washington D.C. – President Obama has rejected the Keystone XL cross-border application filed by TransCanada to the U.S. State Department. This is a huge victory for the Tribal Nations and communities along its proposed route that have been fighting this dirty tar sands project for the past seven years. This rejection is a sincere affirmation of the struggle to protect the sacredness of Mother Earth and her life blood, the water. The following are response statements by Tribal, grassroots and treaty leaders to President Obama’s rejection of Keystone XL cross-border permit application:

Dallas Goldtooth, Indigenous Environmental Network KXL Campaign Organizer, “This is a tremendous victory for all the pipeline fighters who have spent several years fighting the TransCanada “black snake”, Keystone XL! The President’s decision is a clear affirmation of our struggle to defend the sacredness of Mother Earth and to protect the future generations of all our relatives, human and non-human alike. We celebrate this as a win and a powerful step to the greater goals of keeping fossil fuels in the ground and shutting down the tar sands at the source!”

Harold Frazier, Chairman of the Cheyenne River Sioux Tribe, “On behalf of the Cheyenne River Sioux Tribe we are grateful to President Obama for rejecting the Keystone XL pipeline and give thanks to everyone who helped make this happen. We must continue to fight this war against tar sands. We need to stay united with all our Native brothers and sisters here in Canada, and around the world to stop the pollution of our water so our young people can grow up to live good healthy lives.”

Lewis Grassrope, Chairman of the Lower Brule Sioux Tribe, “In the greatest effort of all indigenous people’s to stop the kxl pipeline our prayers were heard. As its a great day for all as our connections spiritually were answered. Thank you to all for the perseverance, fortitude, humility, and courageous acts to stop this black snake from coming onto our lands. One giant step for our children’s future. A great victory today for all indigenous peoples.”.

David Archambault Jr., Chairman of the Standing Rock Sioux Tribe, “The Standing Rock Sioux Tribe applauds President Obama’s decision to deny the permit to the KXL pipeline project. After several years of vigorous debate by many parties, the president resolved the issue by focusing on the big picture. President Obama’s decision is consistent with Tribal values that respect the environment and honor our roles as guardians of our children’s’ futures.”

A. Gay Kingman, Executive Director of Great Plains Tribal Chairmans Association, “Wopila President Obama for rejecting the Keystone XL. Wopila to all our Relatives who stood strong to oppose the KXL, But, keep the coalitions together because there are more Pipelines proposed and we must protect our Mother Earth for our Future Generations.

Paula Antoine, Chairwoman of Rosebud NO KXL Spirit Camp, Oyate Wahacanka Woecun (Shielding the People), “We, along with the Rosebud Sioux Tribe, are extremely honored by President Obama’s decision to reject the Keystone XL pipeline. We have stood united with all those who protect Unci Maka. Our children’s grandchildren will benefit and remember this day as a victory! We affirm our rights as the original caretakers and stewards of the land, resources and oyate. We remain, in solidarity shielding the People. One heart ~ one mind ~ one prayer.”

Faith Spotted Eagle, Ihanktowan Treaty Council Spokesperson, “This is what unity, hard work and breaking down barriers looks like….all for protecting sacred water and land for the generations. Today we stand in thankfulness for Obama, adopted son of the Crow Nation. We stood united in this struggle, Democrat, Republican, Native, Cowboy, Rancher, landowners, urban warriors, grandmas and grandpas, children….. and through this fight against KXL we have come to see each other in a new better, stronger way!”

Frank Waln, Sicangu Lakota, Music Producer and Artist, “For those of us whose homes were on the frontlines of this proposed pipeline, this is a huge step forward. Our efforts to resist all forms of colonization, including natural energy extraction on Indigenous lands are not in vain. I commend all my relatives who have dedicated their time, energy and lives to stopping this pipeline, when society and the government told us otherwise. Indigenous nations are rising. This is only the beginning!”

Aldo Seoane, Wica Agli, “We are excited by the president’s decision to reject Keystone XL. The project not only would have put the environment in harms way but it would have also put the women and children along the pipeline route at a higher risk of domestic and sexual violence. We are encouraged by the president’s choice of people and the environment over politics and big oil.”

Joye Braun, Community Organizer Cheyenne River Sioux reservation, “Today marks a historic day for the people of the Oceti Sakowin, and our allies. I say thank you to President Obama, and Secretary Kerry for seeing the truth behind the Keystone XL pipeline and rejecting the black snake. We must stay vigilant against tar sands and continue our support to our First Nation cousins in Canada who are on the frontline of this world disaster. We will continue to pray and support the fight against tar sands. ”