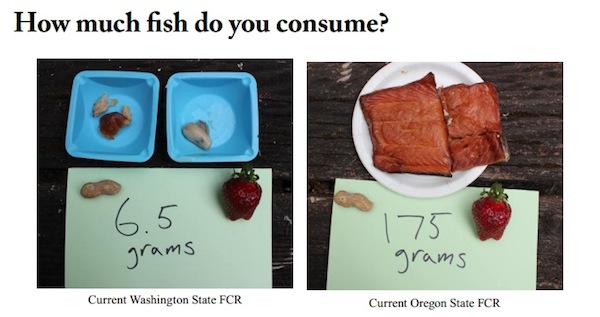 Toxic Waters, Part 2: Focus Should Be Clean Up, Not ‘Do Not Eat’, Tribal Leaders Say

The problems associated with contamination in Northwestern waters are mounting.

For years the many contaminants in Washington State waterways have prompted the state’s Department of Health to issue official warnings against eating Washington fish too frequently. Washington currently has fish consumption advisories issued throughout the state.

“The tribes are not only interested in protecting all the species of fish they eat, but they’re also concerned about protecting their economic interests,” said Ann Seiter, fish consumption rate coordinator for the Northwest Indian Fisheries Commission.

Tribes are calling for major changes in pollution policy. When health officials from Washington and Oregon issued advisories for mid-Columbia River’s resident fish last September due to elevated mercury and PCB levels, tribal leaders were outraged.

“The focus should not be ‘Do not eat’–it should be ‘Clean up’–the Columbia River,” said Yakama Nation Chairman Harry Smiskin in a statement at the time.

“The tribes believe that the long-term solution to this problem isn’t keeping people from eating contaminated fish—it’s keeping fish from being contaminated in the first place,” Columbia River Inter-Tribal Fish Commission Chairman Joel Moffett said in a statement. “Armed with higher fish consumption rates and water quality standards, we hope there will be a greater motivation to remove pollutants from the Columbia River and its tributaries.”

Washington has also issued a lower Columbia advisory that warns of PCBs, DDT and Dioxin as well as other compounds. To the state’s east, an advisory has been issued for the Spokane River, which is contaminated with PCBs, lead and other harmful materials. There is also a statewide mercury advisory.

Washington and Idaho are reevaluating their fish consumption rates, which are used to calculate water quality standards that protect human health. The four Oregon tribes urged Washington and Idaho to adopt at least the same rate that Oregon uses to establish water quality standards protective of all fish consumers in the region, according to the White Salmon Enterprise.

Oregon’s 175-grams-per-day suggested consumption is a more accurate representation of how much fish most of Oregon’s residents actually eat. But even that does not go far enough, tribal leaders say. State and federal governments must act to clean the polluted sections of the Columbia River contaminating fish, Smiskin said.

“The fish advisories confirm what the Yakama Nation has known for decades,” Smiskin said. “State and federal governments can no longer ignore the inadequacy of their regulatory efforts and the failure to clean up the Columbia River.”

The Yakama Nation repeatedly identified contaminated sites along the Columbia, expressing concerns for the health and culture of the Yakama people and calling upon the state and federal agencies for cleanup actions that would protect the tribe’s resources, retained by them in the Treaty of 1855.

“The new advisories once again pass the burden of responsibility from industry and government to tribes and people in the region,” Smiskin said. “Rather then addressing the contamination, we are being told to reduce our reliance on the Columbia River’s fish. This is unacceptable.”

This article originally appeared at indiancountrytodaymedianetwork.com.