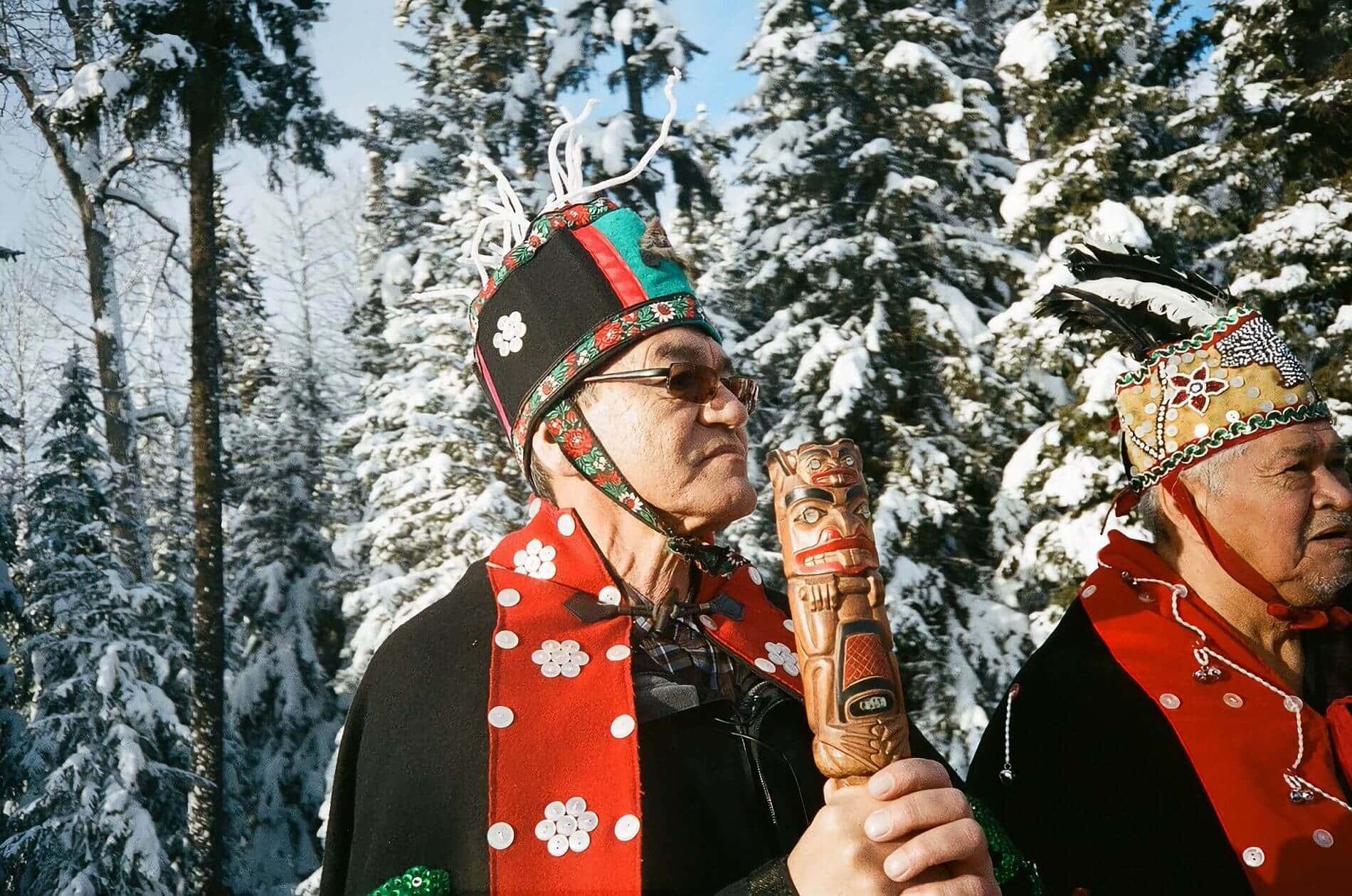 Three years ago, Wet’suwet’en hereditary Chief Na’Moks stood in full regalia before the United Nations in New York City. He propped his cellphone in front of him, took a deep breath and began to speak.

“They thought I was reading a speech. I was looking at a picture of that mountain,” he says, gesturing toward Hudson Bay Mountain, the glaciated peak that presides over Wet’suwet’en territory in northwest British Columbia. “That’s all I had in front of me. You’ve got to speak from the heart.”

It was May 2016, the day after Carolyn Bennett, minister of Crown-Indigenous Relations, announced that Canada would remove its objector status to the UN Declaration on the Rights of Indigenous Peoples (UNDRIP), which had been accepted nearly a decade earlier by the UN General Assembly.

Na’Moks, whose English name is John Ridsdale, was there to make a promise to the UN: That he would return one year later to provide a full report on Canada’s progress implementing the declaration.

Today, Na’Moks addresses the UN Permanent Forum on Indigenous Issues in New York, his second update to the UN since that first visit.

Again, he’ll prop his phone before him, but this time he’ll be reading from notes. It’s important he stick to the talking points — in particular, those addressing Article 10 of UNDRIP, the section that deals with forcible removal of Indigenous peoples from their lands.

“Nothing’s really changed from the time that they accepted it,” he says about Canada’s promise to implement UNDRIP. “They’ve really not done anything.”

Na’Moks, the highest-ranking chief of the Tsayu clan, stood and watched with chiefs of three other Wet’suwet’en clans on Jan. 7 as RCMP carrying automatic weapons forcefully removed a checkpoint put in place by the Gidumt’en clan to prevent Coastal GasLink pipeline workers from accessing the territory.

Several days later, on Jan. 11, a second roadblock 20 kilometres farther down the Morice Forest Service Road on Unist’ot’en territory was peacefully removed after the chiefs reached an agreement with the province.

Even some RCMP, he adds, had tears in their eyes as they forced their way past the barricades.

In a joint news release on Feb. 7, the Office of the Wet’suwet’en and the B.C. government announced the start of a new reconciliation process and plans for a meeting between the province and the chiefs.

On March 16, as Coastal GasLink continued its work on the territory, the chiefs welcomed B.C. Premier John Horgan into the feast hall in Witset (formerly Moricetown). Other politicians, including Minister of Indigenous Relations and Reconciliation Scott Fraser, Minister of Forests Doug Donaldson and federal MPs Nathan Cullen and Murray Rankin, also attended.

The meeting was historic: It was the first time a premier had attended a feast on Wet’suwet’en territory. Horgan had strong words about implementing UNDRIP.

“This fall, we’ll be tabling legislation to give meaning to (Indigenous) rights that were given by the United Nations but not yet picked up in Canada or in British Columbia,” he told more than 100 people in attendance.

“The federal government’s not with us today and the federal government may not be with us in the future. I don’t care much about that. I know that I have a unique opportunity as the premier of British Columbia to work with you to find a path forward.”

Both following the Jan. 7 police action and in the feast hall, Horgan cited a previous meeting with the chiefs, held last August in Smithers. What he didn’t mention was that, according to Na’Moks, it was made clear at that meeting that the chiefs were steadfastly opposed to pipelines through their territory.

“He was clearly told numerous times that we are adamantly opposed to this, we would not support it, and the process that they have in place does not suit the Wet’suwet’en,” the chief says.

But in the feast hall, Na’Moks stood and offered what he describes as an olive branch: “We know that if we do this properly, we can affect every other Indigenous nation in this country,” he said. “This is an opportunity for British Columbia to teach all of Canada the right way.”

Na’Moks says he expects the process of implementing UNDRIP at the provincial level to lead to involvement at the federal level. Already, at the municipal level, the Office of the Wet’suwet’en’s protocol agreement with the local municipality of Smithers is touted as one of the first of its kind in Canada. The four-page document outlines a mutual belief in respect, co-operation and communication.

“It has the potential to be a model for other communities to follow,” Smithers Mayor Taylor Bachrach says. “While protocol agreements provide a formal framework, their success depends on how committed the individuals within the organizations are on a personal level. That’s not something that is easy to write into an agreement — it has to come from the heart. We’ve been fortunate to be able to build on strong personal relationships between individuals.”

The Wet’suwet’en, along with neighbouring Gitxsan First Nation, which is also represented today at the UN, hold a unique position in Canada. For one, like many B.C. First Nations, neither has ever signed a treaty. In addition, both nations were at the centre of the 1997 Delgamuukw-Gisday’wa Supreme Court of Canada decision that redefined Indigenous rights nationally.

“The Wet’suwet’en need to lead this. That’s all there is to it,” Na’Moks says. “One of the first things they told us when the United Nations Declaration on the Rights of Indigenous Peoples came in was, do not let your government define what this is. You need to. So why can’t the Wet’suwet’en be the ones?”

Na’Moks also intends to speak to Article 20 of UNDRIP, two paragraphs guaranteeing Indigenous peoples the right to their own political, economic and social systems, their own means of subsistence and development, and the freedom to engage in traditional and other economic activities. The section ends: “Indigenous peoples deprived of their means of subsistence and development are entitled to just and fair redress.”

But Na’Moks emphasis that his message is not one of financial recompense: It’s about maintaining the clean water that currently flows through Wet’suwet’en territory. It’s about protecting roadless swaths of old-growth forest. It’s about the ability to hunt and trap, to engage in cultural activities on the land without removal or harassment by RCMP.

“We needed something left of us,” he says. “And now they’re taking it away.”

Chief Na’Moks is joined at the forum, which continues until May 3, by HapWilxsa (Kirby Muldoe) of the Gitxsan First Nation, Union of BC Indian Chiefs secretary-treasurer Judy Wilson and policy advisors from the UBCIC. After today’s speech to the general forum, the delegation will spend the rest of the week engaging in table discussions and question-and-answer sessions.

Then, this weekend, they return home — to British Columbia, to the northwest, to the lakes and rivers that flow beneath imposing peaks like Hudson Bay Mountain. Land Na’Moks vows to protect.

“There’s one little piece I want. It’s here. One little piece. They’ve done so much damage. Look at every continent, look what’s happening with the weather. It’s easy to point fingers. It’s easy to complain. The hard part is protecting it. And I think our chiefs and elders are doing that,” Na’Moks says.

“I’m alright to go to New York and Geneva, but I don’t actually breathe right until I’m home.”

This article was originally published in The Tyee. It has been re-published on IC with permission.