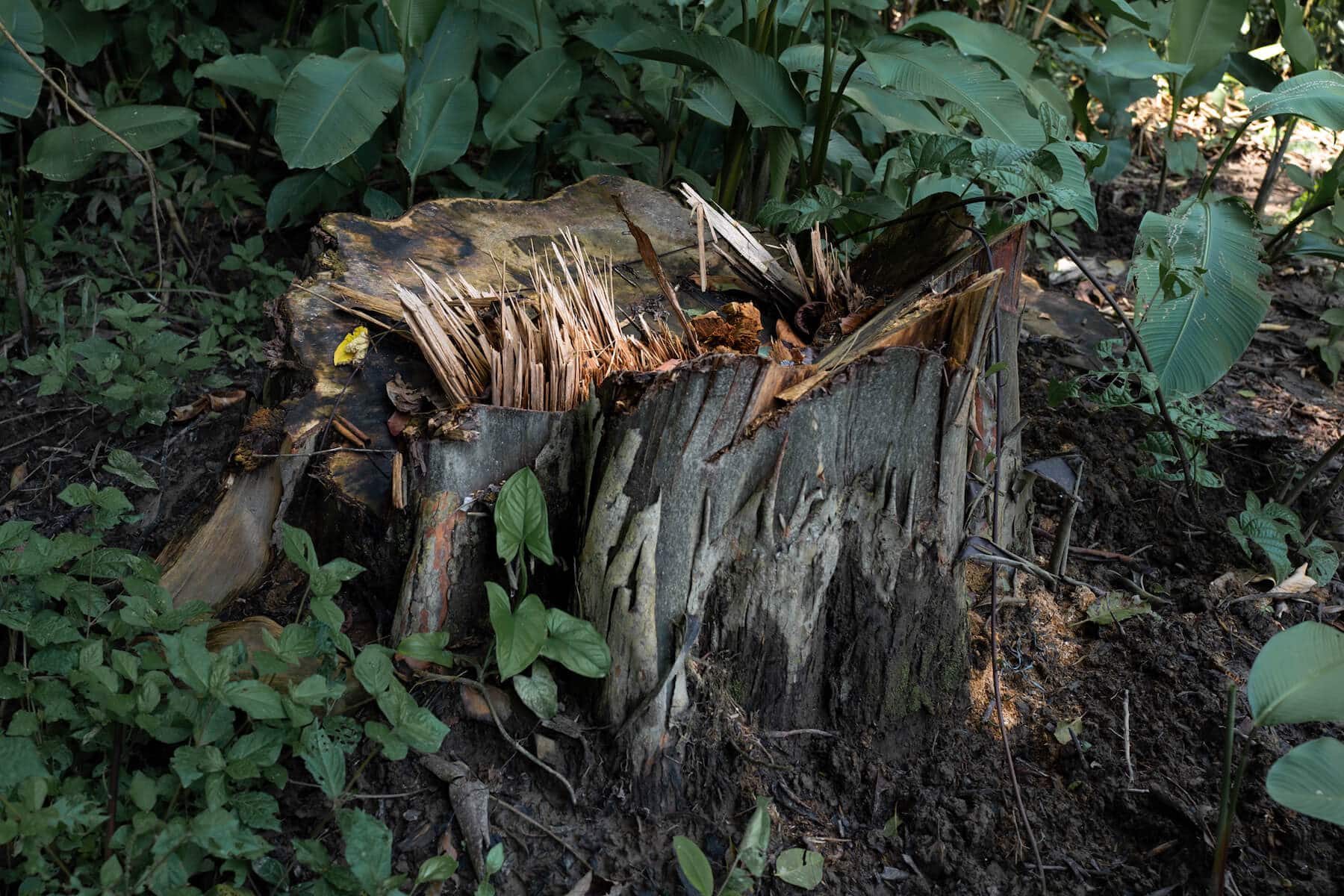 The Wampis Nation strikes back against deforestation

PUERTO GALILEA, Peru — In 2009, special decrees signed by then-president Alan García opened up vast swaths of Peruvian indigenous territory to resource exploitation. Indigenous groups in the northern portion of the country responded by banding together and forming their own autonomous government in 2015 – the first of its kind in Peru – called the Wampis Nation. With its newfound authority, the Wampis Nation has been able to respond to and eject illegal deforestation in its territory, and is continuing to organize and strengthen its voice about land use issues in Peru and abroad.

When Spanish explorer Francisco de Orellana set off in search of spices and the mythological golden empire El Dorado in 1541, he could not have known that his voyage would take him to the curves of the largest river in the world. Among the dangers faced by expedition members was a confrontation with the Icamiabas, a legendary female-led warrior tribe that dominated the river at the time. Orellana compared the Icamiabas to the Amazons of Greek mythology, and gave the river the name most know it by today.

In the intervening centuries, innumerable explorers and industries have plied its waters and forests in the pursuit of knowledge, adventure, and profit. The Wampis know a lot about these visitors. This indigenous group has lived in the Amazon rainforest for centuries, dispersed through more than 13,000 square kilometers (around 5,000 square miles) in the northern Peruvian departments of Amazonas and Loreto. But members say they’re tired of watching invaders cutting down their forests and polluting their water with mercury used to extract gold from the earth. 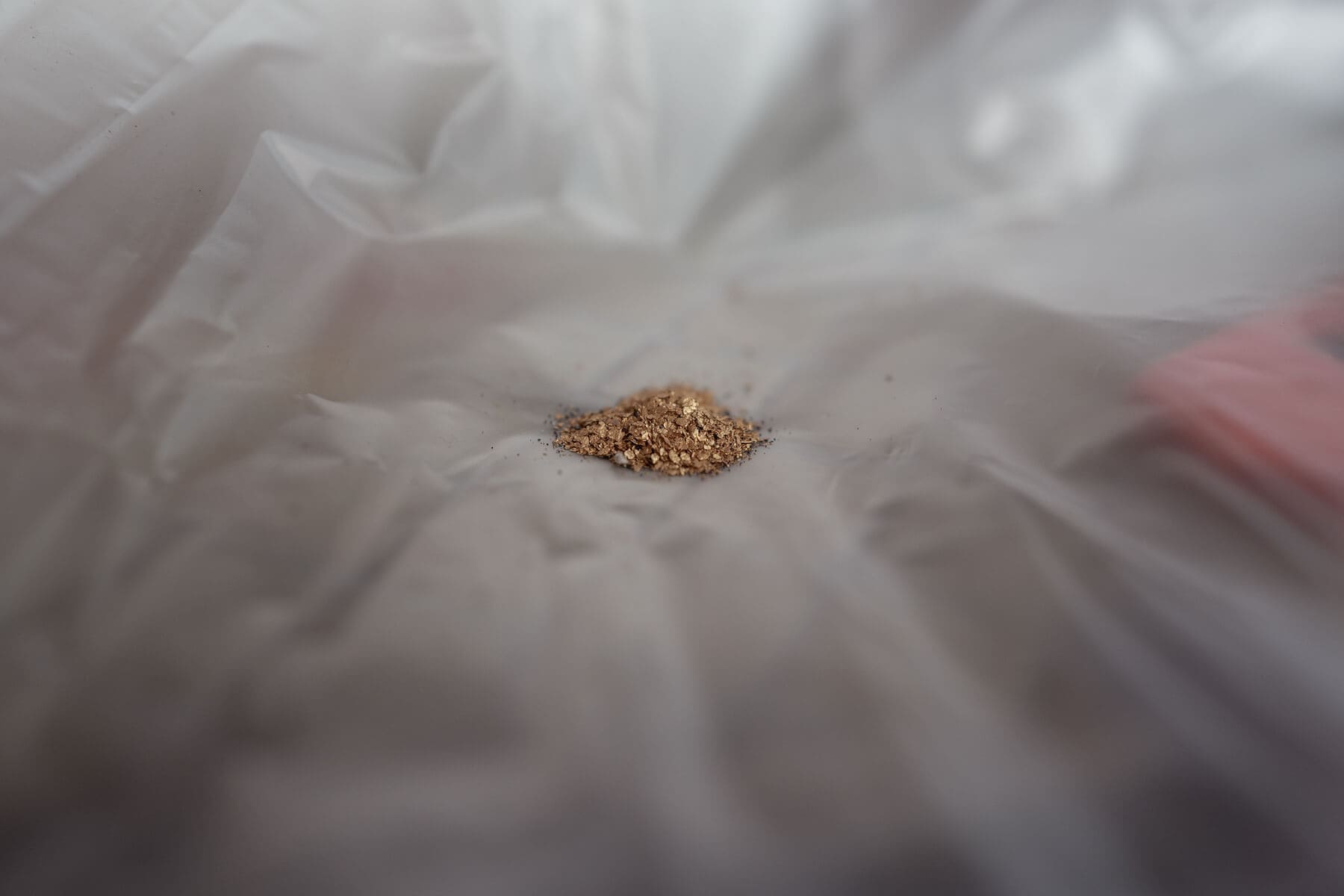 Gold traded clandestinely in Puerto Galilea. Miners often use mercury to separate gold from the surrounding soil. Mercury is also a neurotoxin, posing serious dangers to people exposed to it, and it often escapes into the environment when it’s used in mining. Research has shown high blood levels of mercury in members of some communities living downstream from gold mining operations. Photo by Marcio Pimenta.

More recently, the oil industry has moved in. Conflict for land rights intensified in 2009 when then-president Alan Garcia signed decrees permitting foreign companies to access indigenous territories for oil extraction, mining, and logging. As a result, leases for oil and natural gas concessions covered more than 40 percent of the Peruvian Amazon by in 2010 – up from 7 percent in 2003.

The decrees were announced with the apparent objective of facilitating the implementation of the Free Trade Agreement between Peru and the United States. However, critics say their implementation violated international human rights standards, such as Convention 169 of the International Labor Organization (ILO), which requires indigenous consultation and participation in the use, management and conservation of their territories.

In reaction to these decrees, 3,000 members of indigenous groups representing six different regions of the Peruvian Amazon gathered together and blocked a road near the town of Bagua that connects the department of Amazonas with those of Loreto, Cajamarca and San Martin. The protest, called “Devil’s Curve,” lasted 57 days until the government reacted. The subsequent conflict, which would become known as “El Baguazo,” left 33 dead (10 indigenous members and 23 police officers) and more than 200 injured, and led to widespread looting and destruction throughout the region. Recently, the Peruvian government erected a monument in Puerto Galilea to commemorate the massacre and honor indigenous people and other residents.

Wampis representatives said they realized that only by developing a strong, legal organizational structure would they have a voice to defend their people and the future of their forest. After numerous meetings among their leaders, representatives of 27 Wampis communities with a combined population of 15,000 people came together in 2015. They invoked international recognition of the rights of indigenous people and on Nov. 29 declared the creation of an autonomous territorial government called the Wampis Nation – the first of its kind in Peru – to defend its territory and resources from the growing pressures of extractive industries. Their territory covers an area of rainforest one-third the size of the Netherlands along northern Peru’s border with Ecuador. 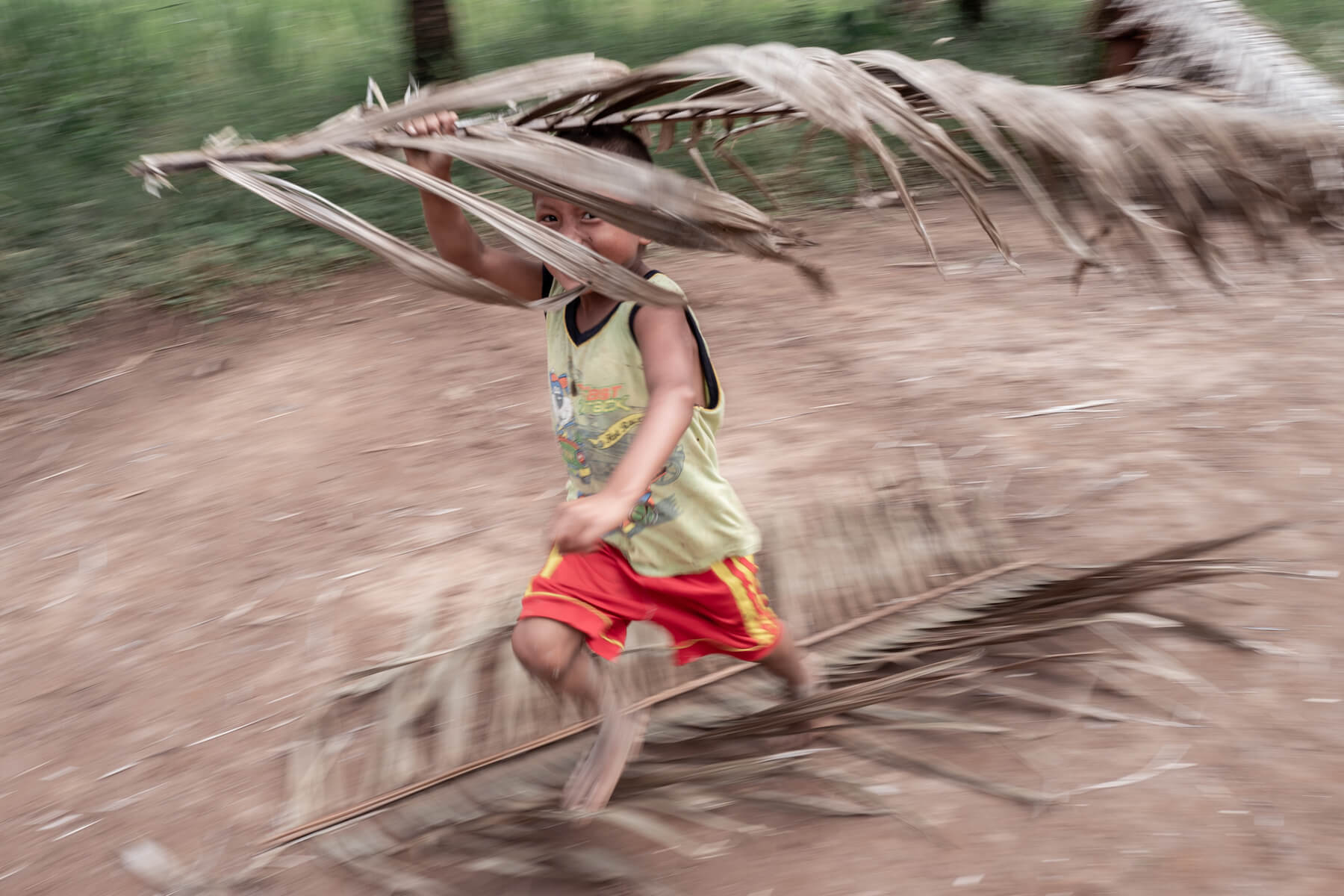 A Wampis child plays in the Ayambis community. Photo by Marcio Pimenta.

Getting to the Wampis Nation is not easy. When the road ends, one must navigate by boat the remainder of the way. Elmer Tuesta is a driver and owner of one of the boats that makes the trip along the Marañón River from Santa Maria de Nieva to Puerto Galilea, the city that marks the edge of Wampis territory. He says he cannot depart until he has a minimum number of passengers. Tuesta calls out to people who circulate on the quay in an attempt to convince them to travel. It does not take long and the efforts of Tuesta are soon rewarded. His boat full, Tuesta steers it languidly through the haze that blankets the trees of the rainforest like a diaphanous white dress.

The trip lasts three hours. Along the way, small boats transporting gold mining equipment are seen anchored offshore. Fearing a reaction from miners, Tuesta does not dare approach, but says that most mining in the territory is on a hiatus until the rainy season ends. 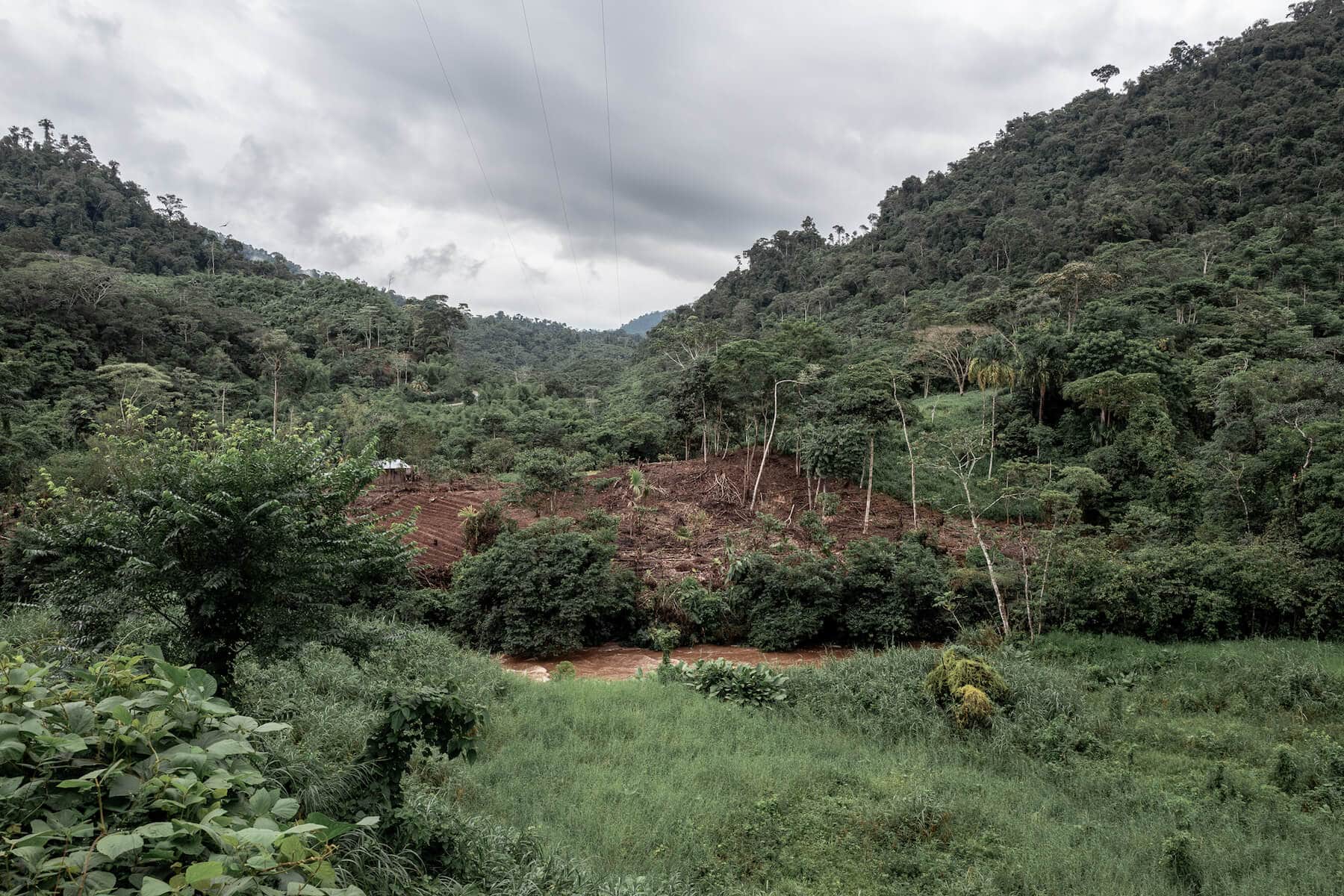 Illegal logging is visible right off the road outside Wampis territory. Photo by Marcio Pimenta.

Among the passengers are many young Wampis who live in big cities. They wear shirts emblazoned with the names of Spanish clubs and the number of popular Peruvian footballer Paolo Guerrero.

“It is the Urban Wampis,” Noningo says, without hiding his disappointment that the young people are abandoning traditions of old. “This is the most difficult part of the process of autonomy….the seduction of the accumulation of goods.”

To confront this issue, the Wampis Nation teaches their native traditions in schools, as well as encourages young people to attend meetings of territorial government working groups and to work in agriculture. This is the case of John Milton, who after living in the city, fell in love and married a Wampis woman and decided to stay. He is still trying to find his space and switches his activities between farming and hunting, but confesses to missing his former urban life. Different is the case of Henery Cuja, who also decided to return after completing a nursing technician course and now provides healthcare in the Ayambis community. He is worried as the heat increases every year and with it the proliferation of mosquitoes that transmit dangerous diseases like malaria, dengue, yellow fever, zika and chikungunya. 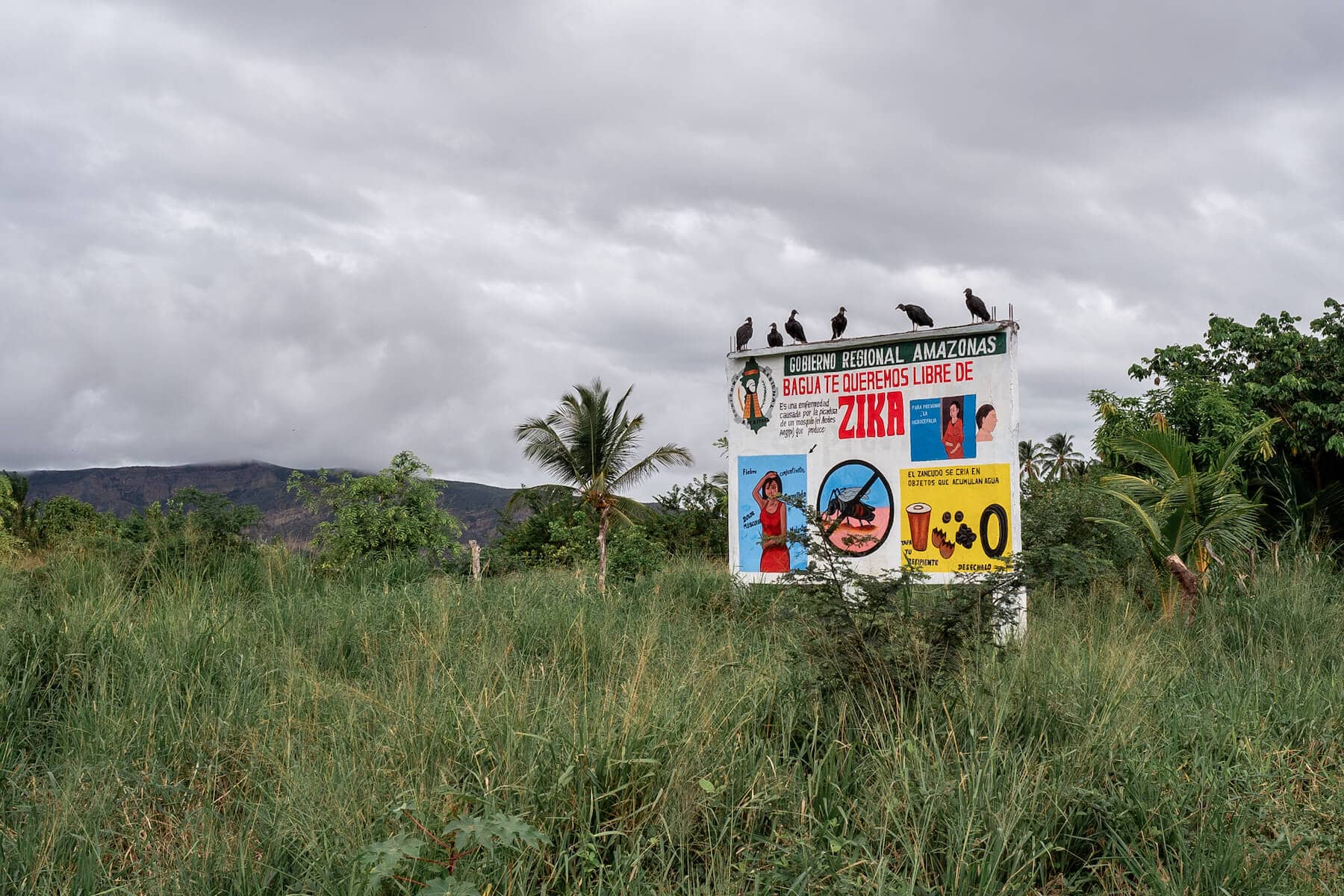 This billboard is part of a government campaign to raise the awareness of the risks of mosquito-borne illnesses in the department of Amazonas. Photo by Marcio Pimenta.

Those working on the ground in the Peruvian Amazon say deforestation is only making things worse when it comes to threats like malaria, with research indicating logging can increase rates of malaria infection since it creates optimal mosquito breeding habitats: ponds at the edges of forests. According to Cuja, 76 of the 250 residents of the Ayambis community have been infected with malaria, several contracting Plasmodium falciparum – the deadliest malaria species.

The Wampis Nation is working to reduce illegal deforestation in their territory. According to Noningo, they have directly expelled illegal miners from their territory. On other occasions, they notified national authorities, who ousted the invaders. 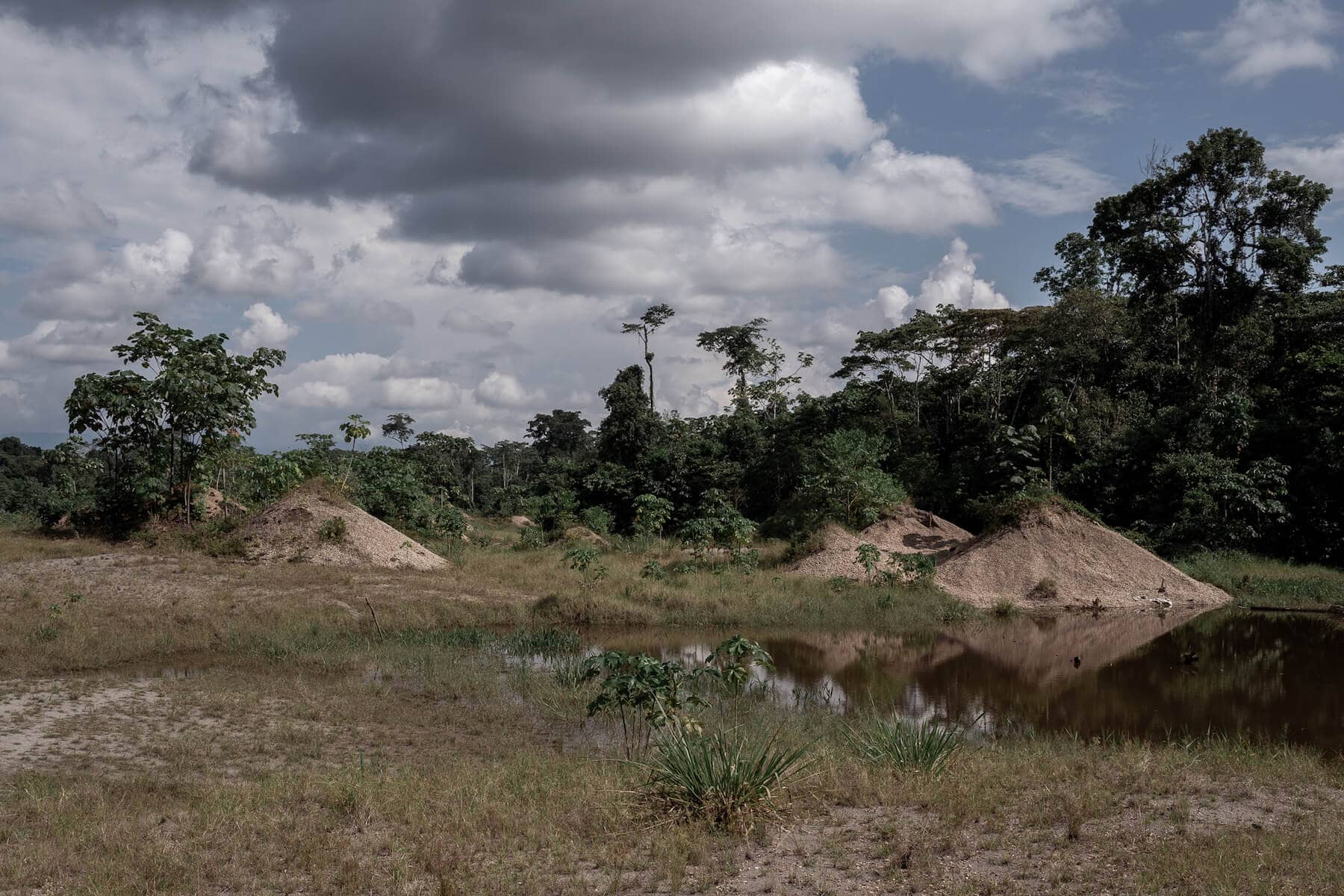 An illegally operating gold mine stopped by Wampis intervention. Photo by Marcio Pimenta.

Addressing logging has been a little more difficult. Unlike other parts of the Amazon rainforest (notably in Brazil), there are no roads in the Wampis region. This makes it more difficult for loggers to clear large areas, but also for authorities to detect illegal deforestation. But Wampis Nation president Wrays Perez says that selective illegal logging is ongoing in the region, with timber smugglers targeting capirona trees (Calycophyllum spruceanum). Also known as bayabochi or mulateiro, the wood from these trees is valuable for use in construction.

According to Perez, loggers access these trees from the river at night, with one person acting as a sentry. Once the tree is felled and trimmed, the loggers load it up on their boat in the morning and carry it down the river to sell it.

Since the founding of the Wampis Nation, the relationship between the Wampis and the Peruvian government has been relatively quiet. Lieutenant Colonel Herberts Cavero Medina, head of the Information Section of the 6th Jungle Brigade, attributes this tranquility to the excellent relationship between the Wampis Nation and the Armed Forces of Peru, which has a strong presence in the territory due its location along the border with Ecuador. After a 1995 conflict between Peru and Ecuador known as Cenepa’s War, the army has worked to locate and remove active landmines from many areas in indigenous territory.

Medina says that young Wampis serve in several battalions in the region and indirectly receive information on illegal logging and mining operations. The army then informs the country’s authorities to remove the invaders – if the Wampis have not already done so. 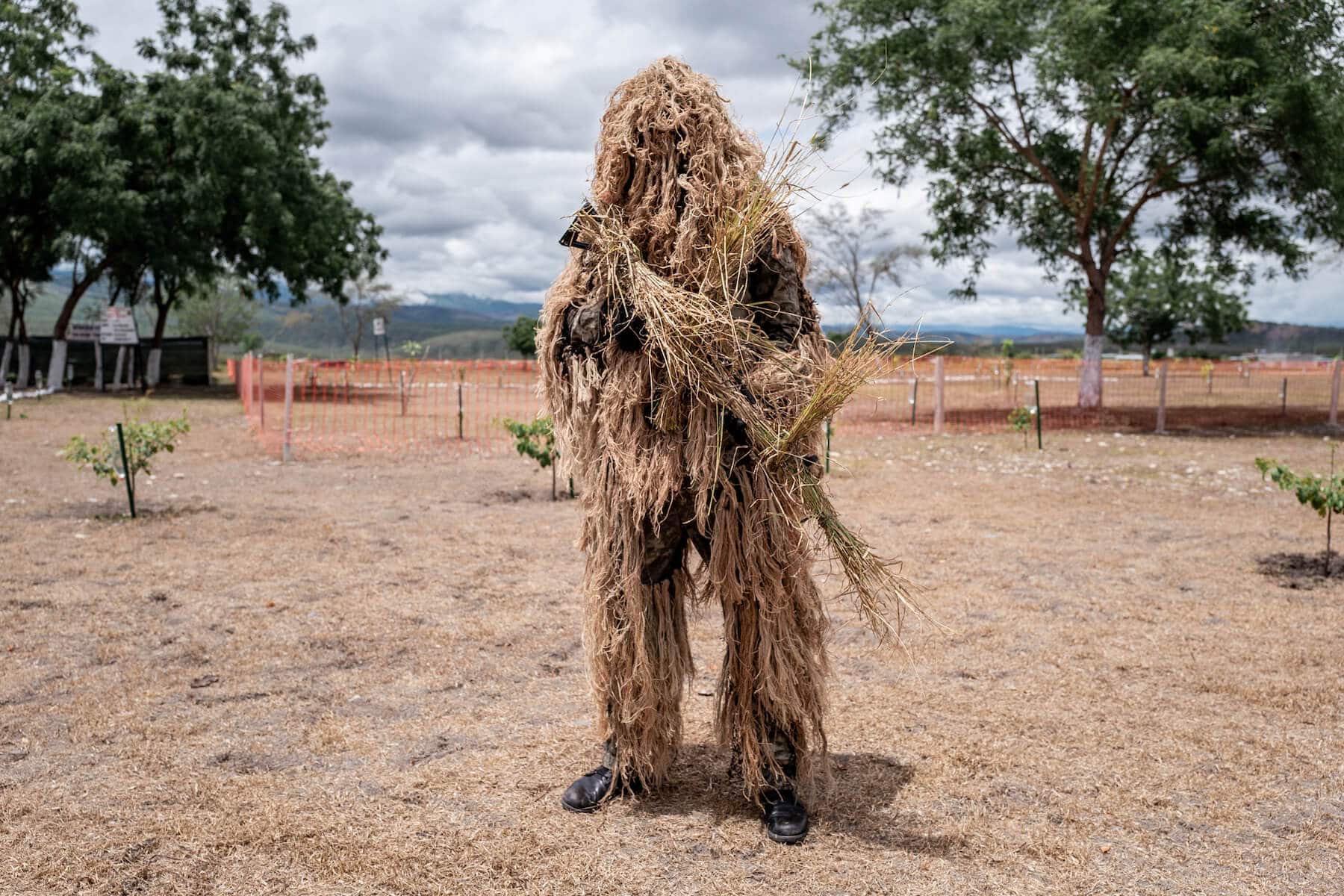 A soldier in the Peruvian army in camouflage and prepared to watch over the country’s borders. Photo by Marcio Pimenta.

Wampis members are allowed to hunt and cultivate up to 5 hectares anywhere they’d like in the territory. And agriculture is profitable. For example, merchants say cocoa can be sold to outside buyers for 3.2 soles per kilo, with a hectare producing on average 1.5 tons per month. Noningo said they’re also considering ways to mine gold “manually, without machines, which is not to attack the forest and to value gold.”

The Wampis’ biggest concern is the oil industry, according to Perez. He specifically calls out the Oleoducto Norperuano oil pipeline, part of which runs through Wampis territory. In total pipeline extends 1,106 kilometers from the Amazon rainforest to the Pacific Ocean to supply the Peru’s refineries. The pipeline has a long history of spills and leaks, with at least 23 occurring between 2001 and 2016. In 2016, the pipeline was shut down temporarily after it experienced three spills in five months.

Perez is also attentive to the outside world, especially to Brazil, the largest economy in South America. The recent election of far-right Jair Bolsonaro as Brazil’s new president is particularly worrisome to him, and he laments the new government’s move to lump the Ministry of Environment under the Ministry of Agriculture and open up indigenous territories to resource exploitation.

“This will greatly affect the Amazon rainforest of Brazil and the rights of the people who live there for thousands of years and have always preserved the forest,” Perez said. 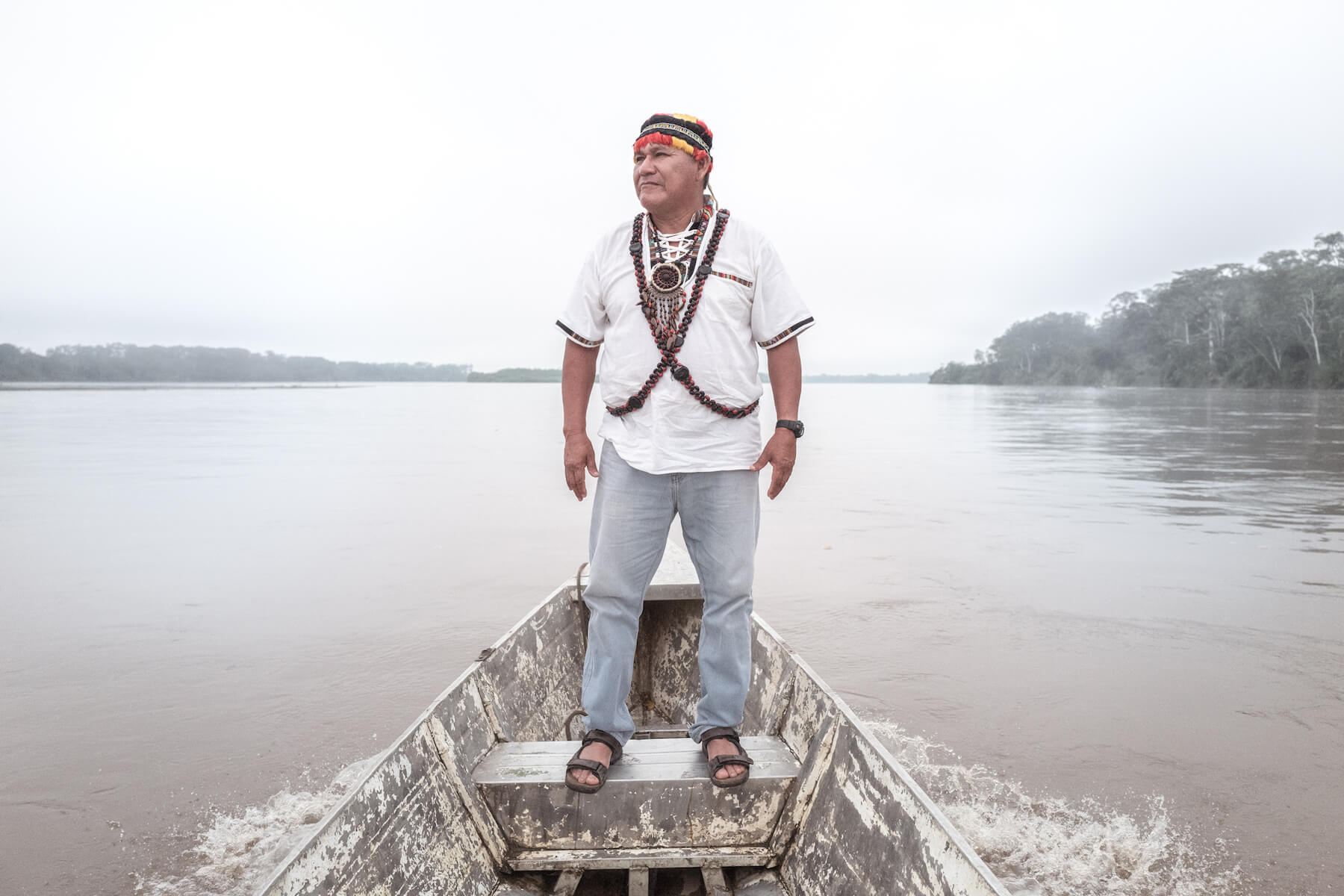 In a world where actions to preserve forests and fight climate change find resistance in the old ideas of new governments, the Wampis are hoping their new identity as a free territory will help change the conversation. For now, though, their focus is on building their capacity and protecting their home.

“The Spaniards did not conquer us directly, we were not slaves, we were absorbed when the states were formed, so we need a lot of time to finally organize ourselves with one voice,” Noningo said.

Marcio Pimenta is a freelance photographer and journalist based in southern Brazil.

This article was re-published at IC under a Creative Commons License, courtesy of Mongabay. It was supported by the Pulitzer Center, and was first published in Portuguese by National Geographic Brasil on Feb. 27, 2019.