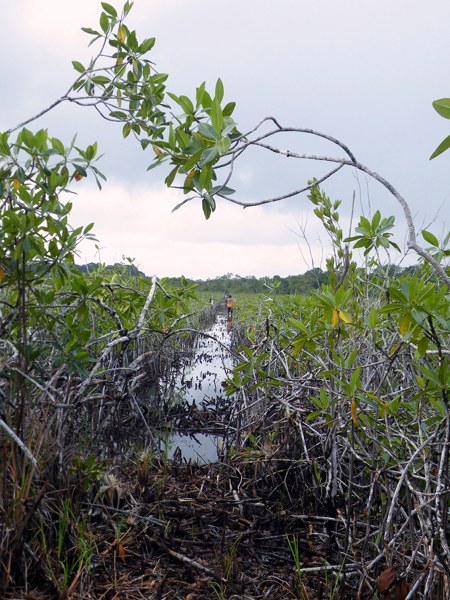 The law is running out of gas in Belize

Two nights ago five men searched in the darkness for Enrique Makin, the chairman of a Maya village. Four of them were from the Belizean government’s department of geology and petroleum; the other was the Mayan permitting officer of a US oil company struggling to conduct seismic testing on the village’s land. This was the day after Standard and Poor downgraded Belize’s credit ratings, citing the structural decline of the country’s oil industry. In the darkness the men couldn’t find Makin, so for now the standoff continues.

The government wants his signature for a letter the oil company composed, granting the right to operate seismic lines (corridors cleared through the rainforest along which explosives will be detonated to find oil) across the territory of the Q’eqchi’ Maya village of Conejo.

The Mayan rainforest initially looks like nature in its wild state — long stretches of jungle interrupted by villages of palm thatch houses nestled among the trees or centered about a clearing decorated with hibiscus. But that first appearance is misleading: land use is tightly controlled by the Maya with each village allotting areas for the sole use of each family to grow crops or to forest. Land is farmed through the milpa technique of rotating fields through the rainforest, allowing the trees and soil to regenerate. The borders of each village are also clearly defined, determining the hunting and fishing areas for each community.

Such regulations form part of Mayan customary law, historically overlooked by administrations, which saw only jungle and granted logging concessions to vast swathes of Toledo. A sustained campaign to secure control over their lands and resources resulted in the Belize Supreme Court granting these customary laws explicit legal recognition in 2007, initially for the two appellate villages of Conejo and Santa Cruz.

Twenty-two further Maya villages won legal recognition of their customary titles in 2010, with the chief justice ruling that “Maya customary land tenure exists in all the Maya villages in the Toledo Districts, and where it exists it gives rise to collective and  individual  property rights” under the Belizean constitution.

Until the government realizes these property rights through legislation (which is on hold while the government appeals the ruling), the government is barred from “issuing any concessions for resource exploitation, including concessions, permits or contracts authorizing logging, prospecting or exploration.”

But with government support the American oil company US Capital Energy is conducting seismic testing across a block of southern Toledo covering eight Mayan villages subject to the 2010 ruling. US Capital is backed by American oil investment company CHx whose director, Alex Cranberg, told me that “all of our activities are in accordance with Belize law and relevant Supreme Court rulings, and that the government of Belize agrees with this position.”

The village of Conejo is surrounded by the oil concession area but, with undisputed land title, its territory is not included in the permit and remains off limits to the company without the explicit consent of the villagers. The community cut a 15ft wide corridor around their land, through rainforests and mangrove swamps, to prevent the oil company claiming ignorance should they illegally operate on their land.

On 17 January villagers found a seismic trail cut across Conejo by US Capital. When it became a Belizean news story, the company claimed it had been cut by mistake.

In Conejo, I was guided through the rainforest to a creek where we selected one of the upturned Mayan canoes and paddled downstream. The seismic trail cuts across the lower reaches on each side, heavily flagged for seismic teams to recognize it, and planted at intervals with pegs for the burying of explosives.

Continuing downstream, we entered a lagoon and then a network of creeks that took us to the boundary cleared between Conejo and the neighbouring Q’eqchi’ Maya village of Sundaywood. The seismic trail cut across it less than a mile up the border from where we moored, running straight as a rule across both communities, the pegs placed close together. One can see it as a meeting between the two laws of southern Belize — the law of the court system and the belief that extractive industries can offer a get-out-of-jail card to a perennially cash-strapped government.

Initially the oil company tried to persuade Conejo not to demand redress and to allow them to operate on the seismic line. Conejo’s Enrique Makin was invited to discuss matters with them on 28 January. I met him straight afterwards.

José María Martinez, the company’s manager of seismic operations, had warned him that lawyers should not be involved, and promised that the company would give Conejo the computer they promised in 2009. Martinez warned that if the community did not allow explosives to be buried and detonated along the seismic line, then the company would sack all twenty of Conejo’s villagers who were employed with the company.

Makin himself is one of those employees. I asked him how he responded: “I am here to face any threats.  I am here to represent my community, not myself or my family. Tomorrow they might fire me.  That’s OK, I don’t need their job.”

Makin had insisted that the village needed to decide its response collectively, with a lawyer present. While at work last week (on 2 February) he was taken off a skiff taking company workers up the Sarstoon River and brought back to the oil company’s headquarters in the village of Barranco where the other Conejo workers had been assembled. He was then told during a phone call with Martinez, that the company was sacking all Conejo’s workers until they agreed a position on the oil company’s operations.

Conejo held its village meeting on Sunday 5 February, which is where US Capital Energy’s permitting officer, Martin Choco, demanded that the villagers sign a letter “or not get a job”, prompting the chairman, on the lawyer’s advice, to suspend the meeting. The letter made no mention of redress, condemned the leadership for exceeding their authority in writing a letter of objection to the company over the seismic trail, and granted US Capital Energy unrestricted access to operate seismic lines on the village’s territory.

US Capital’s Belize representative Alistair King told me on 7 February that the letter was “nothing to do with US Capital Energy”, but claimed it allowed the company to return to work the seismic trail this week. He also claimed that Conejo’s workforce had never been sacked in the first place.

But Conejo’s leadership is not sitting idly by; over 60% of the village’s adult population has signed a petition declaring they did not give their free, prior and informed consent to the oil company’s activities. For now the law of the courts is on their side, but that other law of southern Belize enjoys a sympathetic hearing from a desperate government. Whether explosives are now being buried along the seismic lines of Conejo will show, with utmost clarity, which law rules when oil is involved.