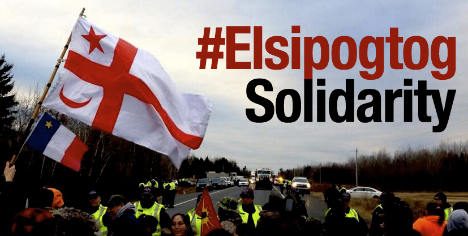 Statement of Solidarity and Support for Elsipogtog Land Protectors

We, a coalition of Indigenous community members and relatives from nations across Turtle Island, have come together to express our support and solidarity with all of the land protectors, warriors, elders, leaders and supporters on the ground in Elsipogtog who have waged courageous, continuous struggles to protect their lands, waters, and communities from irreparable destruction and to ensure a viable future for the coming generations.

On Dec. 6, following ongoing confrontation between the Mi’kmaq Nation and RCMP, SWN Resources Canada announced their intention to end their hydro-fracturing exploratory work for the year, with plans to “return in 2015″. Although this news has been confirmed by various news outlets, warriors on the ground are still prepared to fight SWN if they fail to uphold their commitment to withdrawing from Mi’kmaq territory. We recognize that the contested issue of hydraulic fracturing at Elsipogtog has not been resolved and that the struggle to defend land and water continues.

The Mi’kmaq and their allies began actively protecting their unceded homeland in New Brunswick against “exploratory testing” by SWN more than six months ago, in the spring of 2013.  SWN is searching for deposits of natural gas in shale rock formations, which if found, will be extracted through the process of hydraulic fracturing (fracking). The Mi’kmaq did not give their consent for this activity to occur on their territory and have been adamantly resisting exploratory testing for several months due to environmental concerns regarding the extremely dangerous process of fracking, as well as ongoing treaty violations by the federal and provincial governments.

On October 17, 2013, over 100 RCMP and armed tactical unit officers raided the Mi’kmaq blockade camp in Elsipogtog, assaulting a small crowd of peaceful land protectors, including women and elders, and violently arresting 40 people, several of whom were held in solitary confinement. The RCMP was enforcing an injunction granted to SWN against protestors. The Mi’kmaq Nation was subsequently denied an injunction against SWN’s fracking activity on their homelands, but SWN secured a new injunction against all protests that was set to expire on Dec. 2nd. On Monday, however, it was extended until Dec. 17. Throughout this time, the RCMP have continued to enforce SWN’s injunctions with violent arrests and forceful attacks on unarmed protectors, elders and women, many of whom have been arrested without charges.

The Mi’kmaq and their allies have remained committed to protecting their land, water and community from toxic poisoning by hydraulic fracking.

We, a coalition of Indigenous community members and relatives from nations across Turtle Island, will continue to offer our solidarity in their efforts to protect land, water and life, and uphold their ancestral responsibilities to ensuring the vitality of their nation.

We condemn the oppressive actions carried out by federal and provincial governments, law enforcement, and legal authorities for their continued violation of Peace and Friendship Treaty agreements that bind them with the Mi’kmaq nation and grant their presence in their unceded, unsurrendered territory.

We condemn the colonial state protection of corporate interests in Elsipogtog and elsewhere, as well as the violent enforcement of discrimination against non-consenting Indigenous communities, who have every right to stand up against injustice, uphold their responsibilities to their land, and to protect life.

We call for a moratorium on all forms of hydraulic fracturing (‘fracking’) on Indigenous lands across Turtle Island and we will support and organize resistance to it everywhere we can.

We will provide our full support and assistance to all protectors, warriors, communities, allies, and defenders that uphold their sacred responsibilities and we congratulate Elsipogtog and our Mi’kmaq relatives on their successful resistance to this imminent threat to their homelands.

Your commitment, persistence and sacrifices have not gone unnoticed.  Your action is both brave and inspiring. Wela’lin to all the Warriors, Elders, leaders, children, communities, and allies that sacrificed to protect the homeland of Elsipogtog.

In Peace, Friendship, and Solidarity.

To endorse this statement please leave a comment below, including your group/community/nation/organization’s name. If reposting the statement on your site to endorse, please link back to this post—or email info@nationsrising.org—so that we know you are in support of this statement.

Donations are still needed to support the ongoing costs of maintaining the resistance camps, funding legal defences, and providing supplies to people on the ground at Elsipogtog.

CALL SWN RESOURCES AND TELL THEM TO STAY OFF MI’KMAQ LANDS: