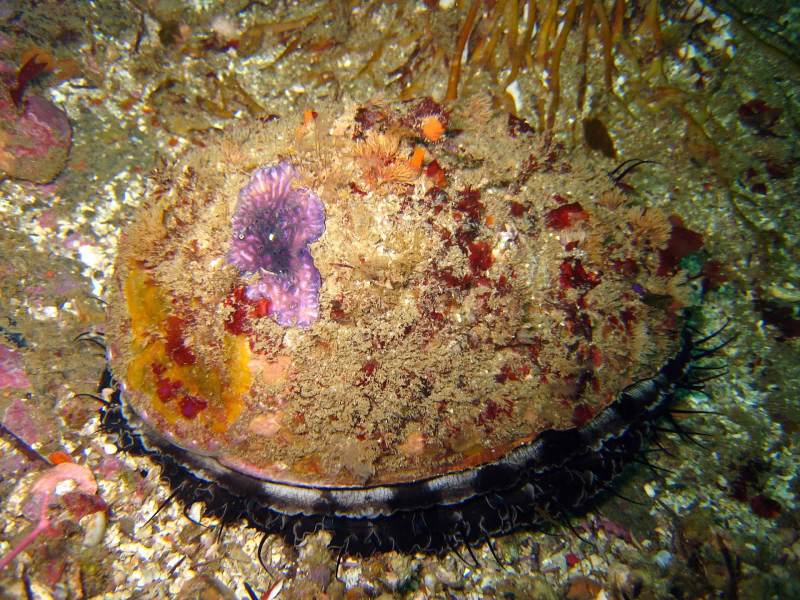 Photo of red abalone at Santa Cruz Island courtesy of California Department of Fish and Wildlife (CDFW).
Support our journalism. Become a Patron!

State officials and representatives of some corporate “environmental” NGOs have constantly touted the so-called “marine protected areas” created under the privately-funded Marine Life Protection Act (MLPA) Initiative as a “science-based” method for bolstering fish and shellfish populations in California.

Yet a recent California Fish and Game Commission decision revealed that traditional fishery management, rather than the marine protected areas supported by the Western States Petroleum Association, Safeway Corporation and other corporate interests under the MLPA Initiative, may be much more effective in addressing fishery declines than the creation of questionable “marine protected areas.”

The Commission on June 26 voted to modify abalone fishery regulations along the northern California coast. By doing this, the Commission effectively admitted that fishing regulations, rather than alleged “marine reserves” that went into effect on the North Central Coast on May 1, 2010 and on the North Coast on December 19, 2012, are the “solution” to reducing pressure on a declining abalone population. The decline was spurred by a die-off that coincided with a local red tide bloom and calm ocean conditions in 2011.

The Commission voted to reduce the annual limit to 18 abalone (previously 24), with no more than nine taken from Sonoma and Marin counties. Other changes to abalone regulations included a coast-wide start time for the fishing day of 8 a.m. and a closure at Ft. Ross in Sonoma County.

The changes were proposed by the California Department of Fish and Wildlife (CDFW) and then adopted by the Commission.

“The new management measures we’ve adopted today will help ensure that the red abalone remains abundant on the North Coast and the popular recreational fishery there continues to thrive,” said Commission President Michael Sutton. “Our job is to keep wildlife populations in California healthy and not wait for a crisis to take action.”

Jim Martin, the West Coast Regional Director of the Recreational Fishing Alliance and representative of the Sonoma County Abalone Network (SCAN), responded, “Apparently Fish and Wildlife believes that traditional fishery management is more effective than marine protected areas in rebuilding fishery stocks – and that reductions in harvest are more effective than closing down areas.”

Martin noted that the abalone decline – caused by a die-off and not overharvesting – occurred in 2011.  SCAN immediately supported a temporary closure at the Fort Ross index site to help the population to recover.

“They extended this temporary closure to a year round one,” said Martin. “We supported both that closure and an 8 am start time to help enforcement, as well as reduced bag limit south of Mendocino County.”

However, the abalone fishermen felt the reduction of the bag limit from 24 to 18 was “completely unnecessary.”

“What they really did was reduced the allowable recreational catch from 280,000 to 190,000 abalone, over a 30 percent reduction. And the Abalone Recovery and Management Plan only called for a 25 percent reduction,” said Martin.

In the course of discussing the regulations, Martin and other fishermen asked the Department to quantify the benefits of marine protected areas to the fishery.

The MPAs were touted by MLPA officials, including Ron LeValley, the Co-Chair of the MLPA Initiative Science Advisory team now being investigated by federal authorities for conspiracy with two others to embezzle nearly $1 million from the Yurok Tribe, because of the “benefits” they would provide by bolstering abalone and fish populations. (http://www.times-standard.com/… )

“The whole selling point of these MPAs is that they would make fish and shellfish populations more abundant,” said Martin. “The first test of that theory turned to be based on false promises.”

Martin emphasized, “We don’t think these marine protected areas benefit abalone at all. If they benefit abalone, give us some numbers. Instead they turned to traditional management to deal with a situation wasn’t harvest related.”

The CDFW press release announcing the regulations confirms Martin’s contention that the Department effectively admitted that the marine protected areas weren’t benefiting the abalone at all.

“Northern California red abalone are managed adaptively by the Commission, using traditional management measures coupled with fishery independent surveys to maintain the catch at sustainable levels, as prescribed by the Abalone Recovery and Management Plan (ARMP). Ongoing data surveys by the Department of Fish and Wildlife detected the effects of a recent abalone die-off along the Sonoma coast,” the Department stated.

“The declines in abalone density triggered the changes to management measures, because the densities dropped below levels that are prescribed in the ARMP for management action,” the release continued.

“The new regulations are intended to provide an opportunity for abalone populations in Sonoma and Marin to increase, and to help Mendocino County maintain a productive fishery. The set start time for the fishing day will also aid enforcement,” the DFW said.

Not mentioned anywhere in the news release are the “glorious” new marine protected areas, created under an allegedly “open, transparent and inclusive” process, that were supposed to bolster the populations of abalone and other species.

The release also didn’t mention the reasons for the abalone die-off and how to prevent a similar situation from taking place in the future.

The “science” that the MLPA Initiative is based on is very questionable, leading tribal biologists, independent scientists, fishing groups and grassroots environmentalists to challenge its assumptions, methodology and conclusions.

The Yurok Tribe said it has attempted on numerous occasions to address the scientific inadequacies with the MLPA science developed under the Schwarzenegger administration by adding “more robust protocols” into the equation, but was denied every time.

For example, the MLPA Science Advisory Team in August 2010 turned down a request by the Yurok Tribe to make a presentation to the panel. Among other data, the Tribe was going to present data of test results from other marine reserves regarding mussels.

“The data would have shown that there was not a statistical difference in the diversity of species from the harvested and un-harvested areas,” wrote John Corbett, Yurok Tribe Senior Attorney, in a letter to the Science Advisory Team on January 12, 2011. “The presentation would have encompassed the work of Smith, J.R. Gong and RF Ambrose, 2008, ‘The Impacts of Human Visitation on Mussel Bed Communities along the California Coast: Are Regulatory Marine Reserves Effective in Protecting these Communities.'” (http://yubanet.com/…)

No Tribal scientists were allowed to serve on the MLPA Science Advisory Team, in spite of the fact that the Yurok and other North Coast Indian Tribes have large natural resources and fisheries departments staffed with many fishery biologists and other scientists.

On the day of the historic direct action protest by a coalition of over 50 Tribes and their allies in Fort Bragg in July 2010, Frankie Joe Myers, Yurok Tribal member and Coastal Justice Coalition activist, exposed the refusal to incorporate Tribal science that underlies the fake “science” of the MLPA process.

To make matters even worse, the Del Norte County District Attorney arrested Ron LeValley, Co-Chair of the MLPA Science Advisory Team, in February 2012 for conspiracy with two others, Roland Raymond and Sean McAlllister, to embezzle nearly $1 million from the Yurok Tribe.

In January, District Attorney Jon Alexander said the state case was dismissed without prejudice against Raymond, LeValley and McAllister to “allow the case to move forward through the U.S. Attorney’s Office,” according to the Eureka Times-Standard.  (http://www.times-standard.com/…)

Wouldn’t it have been prudent for the Natural Resources Agency and Department of Fish and Wildlife to have postponed the implementation of the alleged North Coast “marine protected areas” until this case had been resolved in the courts – and when the legitimacy of the “science” of the MLPA Initiative was already facing severe criticism from well-respected scientists?

The Marine Life Protection Act (MLPA) is a landmark law, signed by Governor Gray Davis in 1999, designed to create a network of marine protected areas off the California Coast. However, Governor Arnold Schwarzenegger in 2004 created the privately-funded MLPA “Initiative” to “implement” the law, effectively eviscerating the MLPA.

The “marine protected areas” created under the MLPA Initiative fail to protect the ocean from oil spills and drilling, water pollution, military testing, wave and wind energy projects, corporate aquaculture and all other uses of the ocean other than fishing and gathering. These areas are not  “marine protected areas” in any real sense, but are just “no fishing” zones.

The MLPA Initiative operated through a controversial private/public partnership funded by the shadowy Resources Legacy Fund Foundation. The Schwarzenegger administration, under intense criticism by grassroots environmentalists, fishermen and Tribal members, authorized the implementation of marine protected areas under the initiative through a Memorandum of Understanding (MOU) between the foundation and the California Department of Fish and Wildlife.

This work by Dan Bacher originally appeared at the Daily Kos. Republished with permission.