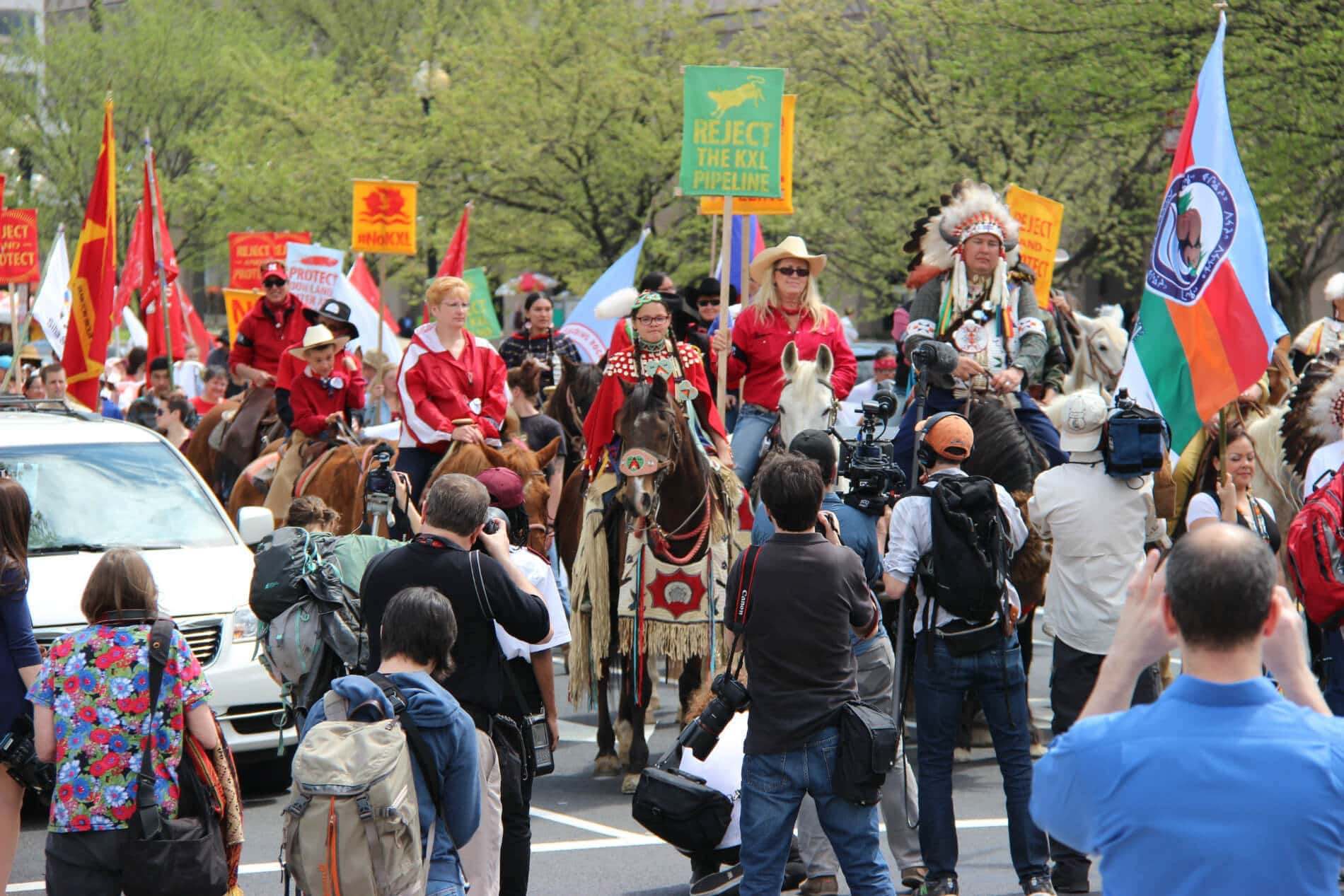 The bills would allow the state to sue protesters — and their supporters — and use the money for pipeline-related costs.
Members of the Cowboy and Indian Alliance riding on horseback and protesting in unison against the Keystone XL Pipeline. Photo: Vincent Schilling
Support our journalism. Become a Patron!

Two bills allowing the state of South Dakota to prosecute pipeline demonstrators and their funders — and use money from damages to fund law enforcement and pipeline costs — were passed by the South Dakota Legislature on Thursday. The bills are now headed to Gov. Kristi Noem’s desk to sign in the coming days. Due to the bills’ emergency clauses, once signed, they will immediately become law.

Introduced by South Dakota Gov. Kristi Noem, R, on Monday, the bills would protect the 1,179-mile-long Keystone XL pipeline, a planned TransCanada project that would slice through the state carrying 830,000 barrels of crude oil a day. The Great Plains Tribal Chairman’s Association has opposed the bills, representing the leaders of 16 tribes in the region, none of whom were consulted for the legislation.

Anti-protest laws exist in other states — bills were passed in North Dakota after the 2016 #NoDAPL demonstrations — but the South Dakota package, introduced in the legislative session’s final days, casts a much larger net over who can be legally pursued by authorities. It creates financial punishments for “riot-boosting,” a new term defining the actions both of protesters who participate in “riots” as well as anyone who “does not personally participate in any riot but directs, advises, encourages, or solicits other persons participating in the riot to acts of force or violence.” The legislation would also establish a fund — with the acronym “PEACE” — to address extraordinary expenses for the state and its counties from the pipeline, including protests, with the funds collected from “riot-boosters.”

Conflict around the bills simmered during a joint appropriations committee meeting on March 6, centering on the undefined reach of a “riot” and what that word truly means. Under South Dakota law, a riot is a felony, with “riot” defined as three or more people executing or threatening force or violence without the authority of law. (Noem said she considered the #NoDAPL demonstrations to be riots.) The “riot-boosting” law extends the state’s authority to sue rioters and any number of their supporters, and allows it to charge anyone who “solicits or compensates any other person to commit an unlawful act or to be arrested” three times the damages sustained. It’s unclear whether “encouraging” a “riot” could cover acts like GoFundMe donations or posting bond for arrested demonstrators.

Republican proponents insisted the bills were necessary to help counties and the state address fees from unlawful assembly, citing the millions North Dakota incurred in damages in the wake of the #NoDAPL demonstrations. Supporters also called the legislation urgent, noting the Keystone XL could begin construction as early as summer 2019, though others noted that the pipeline’s outstanding permit requests negated that chance.

Opponents insist that the laws would effectively snuff out constitutional protests such as those at Standing Rock.

The riot-boosting bill “has the capacity to make a criminal of any citizen, not just big donors or supporters,” said Crow Creek Chairman Lester Thompson, Jr. “In a world of social media, how do you determine who is a riot-booster or just a concerned citizen?”

Thompson was the only tribal chairman who spoke at the hearing; many tribal leaders from South Dakota were in Washington, D.C., testifying about federal appropriations for the Bureau of Indian Affairs and the Indian Health Service.

During a press conference, Gov. Noem said the bills were meant to target out-of-state agitators, alleging that George Soros, a philanthropist and common right-wing target, was one of them. But there is nothing stopping the laws from impacting tribal nations or citizens. Unlike the tribes, TransCanada had a seat at the table as the bills took form, Noem said. The company will also contribute to the PEACE fund.

“It seems like this Canadian company is calling the shots here,” said Gay Kingman, executive director of the Great Plains Tribal Chairman’s Association, at the hearing. “Transparency dictates that all stakeholders should have a seat at the table, and anything less is paternalism that tribes have experienced for years.”

Sen. Reynold Nesiba, D, who voted no, criticized the lack of tribal involvement and expressed concern over the broad reaches of the state’s “riot” definition. “So many people write a check or give cash for people who are going to a protest, partly for educational experiences,” he said after the committee vote. “That notion of trying to hold somebody liable for the actions of another I find deeply problematic.”

Sen. Ryan Maher, R, whose district neighbors the Cheyenne River and Standing Rock reservations, also voted no. “I’m not going to support 189 today just because of how ‘riot’ can be construed,” he said.

Documents obtained by the ACLU of Montana showed the federal and local law enforcement had “anti-terrorism” training sessions and “riot-control formations” in 2018 to prepare for predicted Keystone XL protests. At the Standing Rock demonstrations, extremist vocabulary came hand-in-hand with mass arrests and the use of water cannons and teargas grenades. Some journalists received riot charges at Standing Rock, which were later dropped.

This article was originally published by our media partner, High County News. It has been edited for IC with permission.