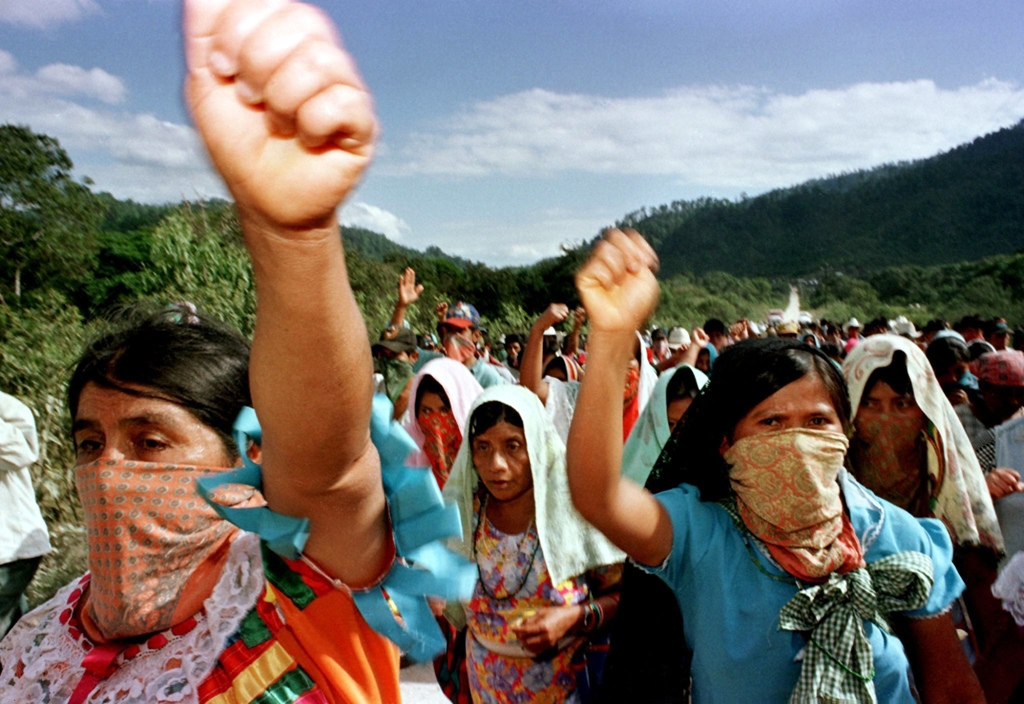 What side were we on?

When the Zapatista uprising appeared in world media on January 1, 1994, it wasn’t out of the blue; Maya communities had been holding assemblies to discuss the ramifications of armed defense of their democratic way of life for well over a decade.

What was new was the EZLN alliance of Mayas with non-indigenous Mexican revolutionaries — born in the national conflict of 1968 when students organized in response to the Tlatelolco massacre of protesters by the army in Mexico City — and a working relationship with international NGOs and civil society human rights networks. Common to them all were principles of participatory democracy, but the driving force was the social base of indigenous communities of Chiapas and their authentic culture.

As the 20th anniversary of the Zapatista uprising fast approaches, the history of the EZLN — the guerrilla nucleus, the millenarian resistance, and the option for the poor — is presented in a three-part translation at Upside Down World.

As Zapatista autonomous communities struggle against ongoing attacks by Mexican police and vigilantes, speakers for the Zapatista movement of liberation continue reaching out to the world to prevent further atrocities by the stormtroopers of Free Trade. In describing the betrayal and decomposition of the Mexican political class, Zapatista spokesman Subcomandante Marcos in 2006 observed that by turning their backs on the just demands of the indigenous and other dispossessed in their country, something was definitively ruptured beyond reform.

Looking at the dominant neoliberal socioeconomic model as the source of their misery in Mexico, the Zapatista leader noted how this consolidated betrayal by the entire political class has foreclosed their rights as indigenous peoples. Acknowledging that they once thought the process of dialogue and negotiation with the federal government by civil and peaceful means would strengthen the path of dialogue and negotiation as an alternative for the resolution of conflicts, by 2006 they had to admit that they were wrong.

Today, with Idle No More looking to find its feet in fighting globalization and oligarchy — the same foes confronted by the Zapatistas — NGOs and civil society networks are again essential to the liberation movement. While liberation news outlets and network communications are critical infrastructure for liberation, a social base is equally important.

As Subcomandante Insurgente Marcos remarked during the 2012 national campaign for democracy in Mexico,

We are coming after the rich of this country, we are going to kick them out, and if they have committed crimes, well, we will put them in prison… because this is the time that has come. We say that coexisting with them is not possible, because their existence means our disappearance.

As noted at the Americas Program in 2006, the formation of the Zapatista Army of National Liberation from 1983-1994 — during which time they were building toward insurrection by empowering citizens as social actors — focused on the non-institutional politics of building autonomies in order to “distribute power so it can do no harm,” the objective being to “free organized discontent from the reductive trap of electoral politics that fails to offer an alternative to the neoliberal model.” For readers looking to better understand the relationships between indigenous peoples, revolution and democracy, my friend David Ronfeldt’s book The Zapatista Social Netwar in Mexico is both interesting and informative.

I have occasionally written here about dominion theology and religious colonization as part of the indigenous experience that forms a backdrop to many of the ills and unresolved grievances we face today. But while we struggle against the backwardness and cruelties of religious fundamentalism, we must also acknowledge the role of liberation theology in shining a light on the social justification for the indigenous peoples’ movement.

For anyone who has committed their lives to social justice, the ironies that comprise the evolution of human rights for indigenous peoples are simply part of the landscape. In Chiapas, one man who became part of the indigenous landscape was Don Samuel Ruiz Garcia, the bishop of the Diocese of San Cristobal de las Casas from 1959-2000. Tatic Samuel (Father Samuel in the Maya language tzotzil) passed away on January 24, 2011.

While the Zapatista uprising in 1994 was not his doing, the work of Tatic Samuel in raising political consciousness among the Lacandon Maya is part of their story. In his view, Father Samuel illuminated the obstacles and alternative paths for them to recuperate their dignity. In 2004, Samuel Ruiz said, “The question that God puts to us at the end of our existence will be: What side were we on?”