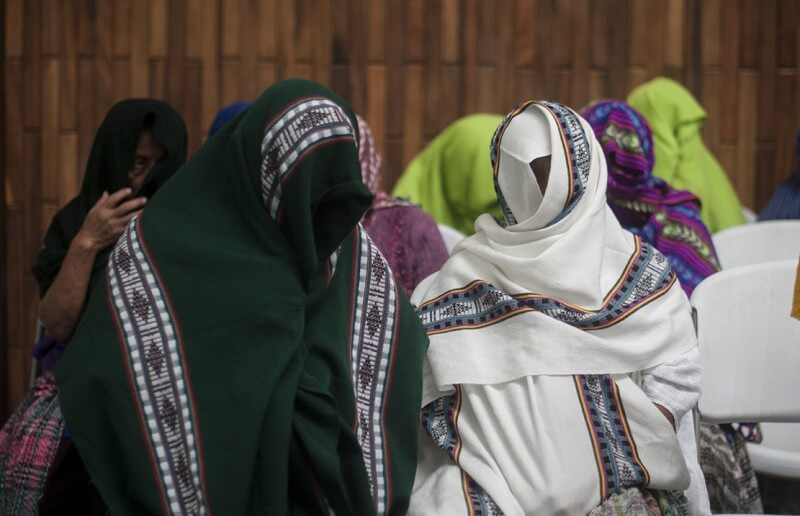 “Q’eqchíes have covered their faces during the whole process. The eyes can be barely seen. When the experts opened the boxes that contained 48 carcasses with signs of torture, their gaze was fixed on the remains of the people that haven't been able to be identified, and that could be any of their husbands, or other witnesses’ family members. Photography taken by Sandra Sebastián, and published in Plaza Pública under Creative Commons license.
Support our journalism. Become a Patron!

On February 26th 2016, a Guatemalan court declared former members of the military guilty of crimes against humanity. The crimes consisted of rape, sexual slavery and murder of indigenous girls and women during the country’s armed conflict, with a sentence that amounted, in total, to 210 years. This is the first time that a domestic court has declared rape as a weapon of war and a crime against humanity, a move seen as historic by both international institutions and citizen media:

#Guatemala shows us that sexual abuse in contexts of war is not "boys being boys"; it is a weapon of war and it must be punished #SepurZarco

In the facilities of the Supreme Court of Justice, Q’eqchíe women have brought back to life the memories of the months they spent in the detachment of Sepur Zarco [a military outpost]. […] The testimonies of the victims […] have been reproduced and retold how the soldiers -guided by military commanders- forcefully made their husbands disappear in August 1982. ‘Widowed’ and ‘alone’, they were forced to move to the detachment in Sepur Zarco, where, according to their accounts, they were raped repeatedly and forced to cook and wash military uniforms for six months.

The verdict was delivered in public, while the identity of the victims was protected. Anyone interested in the case had the opportunity to watch it live online, something that prompted all kinds of reactions from the general public.

Prominent women like Human Rights activist Rosalina Tuyuc were in the audience, as well as Nobel Peace Prize winner Rigoberta Menchu, who was live tweeting her impressions:

Fighting with my sisters, Maria Rosalina Tuyuc and Canil, founders of CONAVIGUA

In her verdict, the judge described the brutal treatment that vulnerable, indigenous women suffered from soldiers during times of war:

"In #SepurZarco, the treatment women received was worse than that of animals", Judge Barrios #JuicioSepurZarco #Guatemala

Other Twitter users underlined the importance of this verdict:

#Guatemala today is proof that justice can be served in cases of grave human rights violations by domestic courts. #SepurZarco

While international observers praised the efforts of the national courts, a deep reflection came from the national organisation comprising all universities — the CEUG (in Spanish, Coordinadora Estudiantil Universitaria de Guatemala), which has played a crucial role recently in the battle against corruption, summarized in one line why the ruling is vital for the future of the nation:

As long as there is justice for the underdog, for the vulnerable, there is hope for a dignifying future for all of us #SepurZarco

While the sentence can be appealed in the Guatemalan courts and even declared void by the Cour de Cassation, the majority of public opinion agrees with the fact that the verdict delivered by Judge Jazmin Barrios today sets a precedent of dignity, courage and non-violent resistance for indigenous women who refused to give up the struggle for justice, and who overcame the stigma of rape, poverty, exclusion, racism, and classism to achieve justice. Even after 34 years, this judgement has opened a way to justice for women in Guatemala — and around the world — who are and have been victims of war crimes.

This article was originally published on GlobalVoices. It has been re-published on IC under a Creative Commons (CC BY 3.0) License.