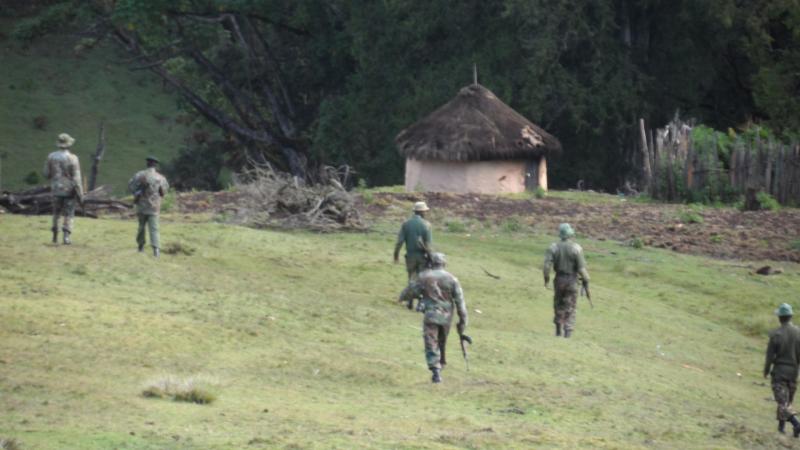 The Sengwer People of the Embobut Forest in Kenya, one of the few remaining hunter-gatherer peoples in East Africa, are being forcibly evicted from their lands by guards from The Kenya Forest Service, with support from the Kenya police. Despite a court injunction forbidding the eviction, thousands of Sengwer People now face an all too familiar loss of homes, food stores and belongings.

Rolling slopes in Kenya’s western highlands, the Sengwer have lived in and cared for the Cherangany Hills for centuries. However, since 2007, when the World Bank began disbursing funds to the Kenya Forest Service for a Natural Resource Management Project (NRMP) the Sengwer’s legacy has been threatened.

Acting in the name of protecting the forest and safeguarding urban water supplies, the Kenya Forest Service sets fire to Sengwer homes and food stocks almost every year (2007, 2009, 2010, 2011, 2013). The current evictions are taking place under the same banner.

In January 2013, representatives from [the Sengwer] submitted a complaint to the Inspection Panel, the Bank’s accountability mechanism, claiming the Bank had violated its policies on indigenous peoples and involuntary displacement. They argue[d] the NRMP project changed the border of the Cherangany forest reserve so that it included areas where indigenous peoples live. This automatically made them a target for eviction by the Kenya Forest Service.

The Bank did warn in its Indigenous Peoples Plan that the project would end in failure unless the Sengwer’s communal land rights were secured. However, that warning was never acted upon.

Following the complaint to the Inspection Panel, in March 2013, the Eldoret High Court issued an injunction forbidding the Kenya Forest Service guards and the police from carrying out any further evictions or destruction of homes. The injunction was renewed in November 2013.

On Jan. 18, 2014, the Judge at Eldoret High Court issued another order that the police were to arrest anyone breaching the injunction. However, with the police providing support to the Kenya Forest Service guards who are now carrying out the evictions, no one appears prepared to enforce the order.

Embobut is the communal land of the Sengwer, as the government itself has recognized in the past. Sengwer are neither squatters nor internally displaced persons, but an indigenous community living within their ancestral lands and territories, and Embobut forest is part of it.

One Sengwer woman came out of hiding and told the Forest Peoples Programme:

All school uniforms, cooking pans, water containers, cups were burnt. Now the children have to stay home while I find uniform and books. The children are very upset because we have lost everything. The children and elderly people will end up getting pneumonia because we don’t have anything to cover ourselves at night.

In efforts to justify the actions, the Kenya government has labeled the Sengwer as squatters in the forest, and alleged that they have accepted money in order to relocate. President Kenyatta, changing tactics, came to Embobut in November and offered 400,000 Kenyan shillings to a list of 2,784 “beneficiaries,” whose names have not been made public. These included some of the indigenous Sengwer, as well as internally displaced people who are mostly landslide victims, and those who have land elsewhere but have seen Sengwer land as available to cultivate.

The Kenya government takes a colonial approach to forest conservation, evicting those who have protected their forests for centuries. It replaces them with the Kenya Forest Service whose track record at nearby Mount Elgon demonstrates that when the KFS is in control then indigenous forest is fast destroyed, as profit-making plantations and agriculture replace the biodiversity of the indigenous forest.

In December 2013, the Forest Peoples Programme along with more than 60 other international conservation and human rights organizations launched an appeal to the Government and Parliament of Kenya to stop the forced and illegal evictions of the Sengwer Indigenous Peoples. They renewed this appeal to President Uhuru Muigai Kenyatta on January 14.

A petition on the Avaaz website is available and will be delivered to the Government of Kenya.