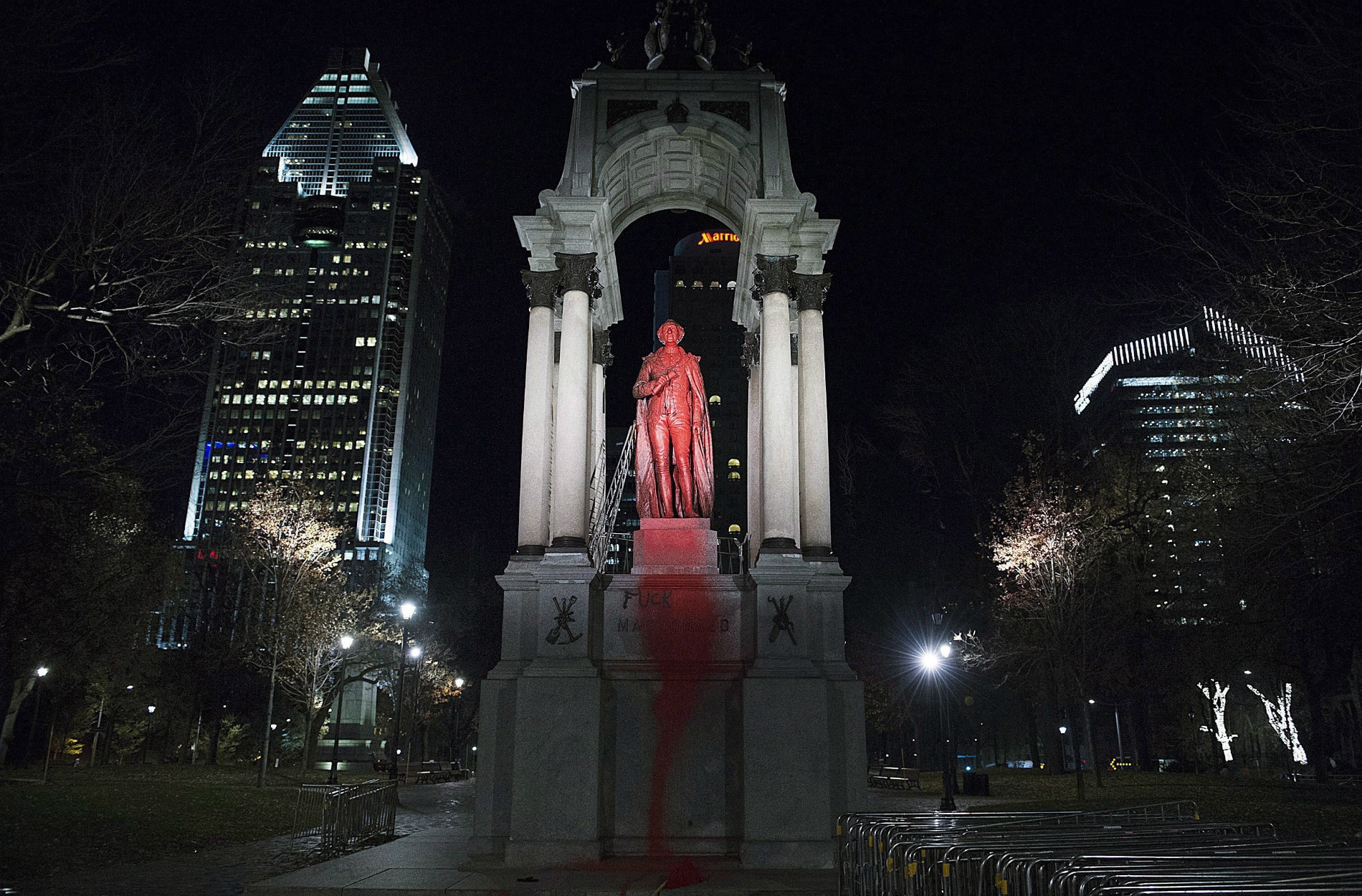 A statue of John A. Macdonald in Montreal has been repeatedly vandalized with red paint to symbolize blood. As the debate continues about removing statues, what specific actions are needed to promote reconciliation? THE CANADIAN PRESS/Graham Hughes
Support our journalism. Become a Patron!

In explaining the decision by the city of Victoria to remove a statue of Sir John A. Macdonald from a prominent location outside its city hall, Mayor Lisa Helps tied the action to the cause of reconciliation between Indigenous and non-Indigenous peoples.

“It’s been a year of discussion and deliberation, and we realized it’s going to be many years of reconciliation,” said Helps.

Others in Canada in favour of removing statues of historical figures or renaming buildings and streets have drawn the same linkage in recent years. Movements against the commemoration of Edward Cornwallis in Halifax, Jeffrey Amherst in Montreal, and Nicholas Flood Davin in Regina have all been related to advancing reconciliation.

Not everyone is convinced these symbolic gestures are appropriate or sufficient.

A year ago, when removing Macdonald’s name from Ontario school buildings was being debated publicly, Sen. Murray Sinclair, the former chief commissioner of the Truth and Reconciliation Commission, opposed the symbolic approach. 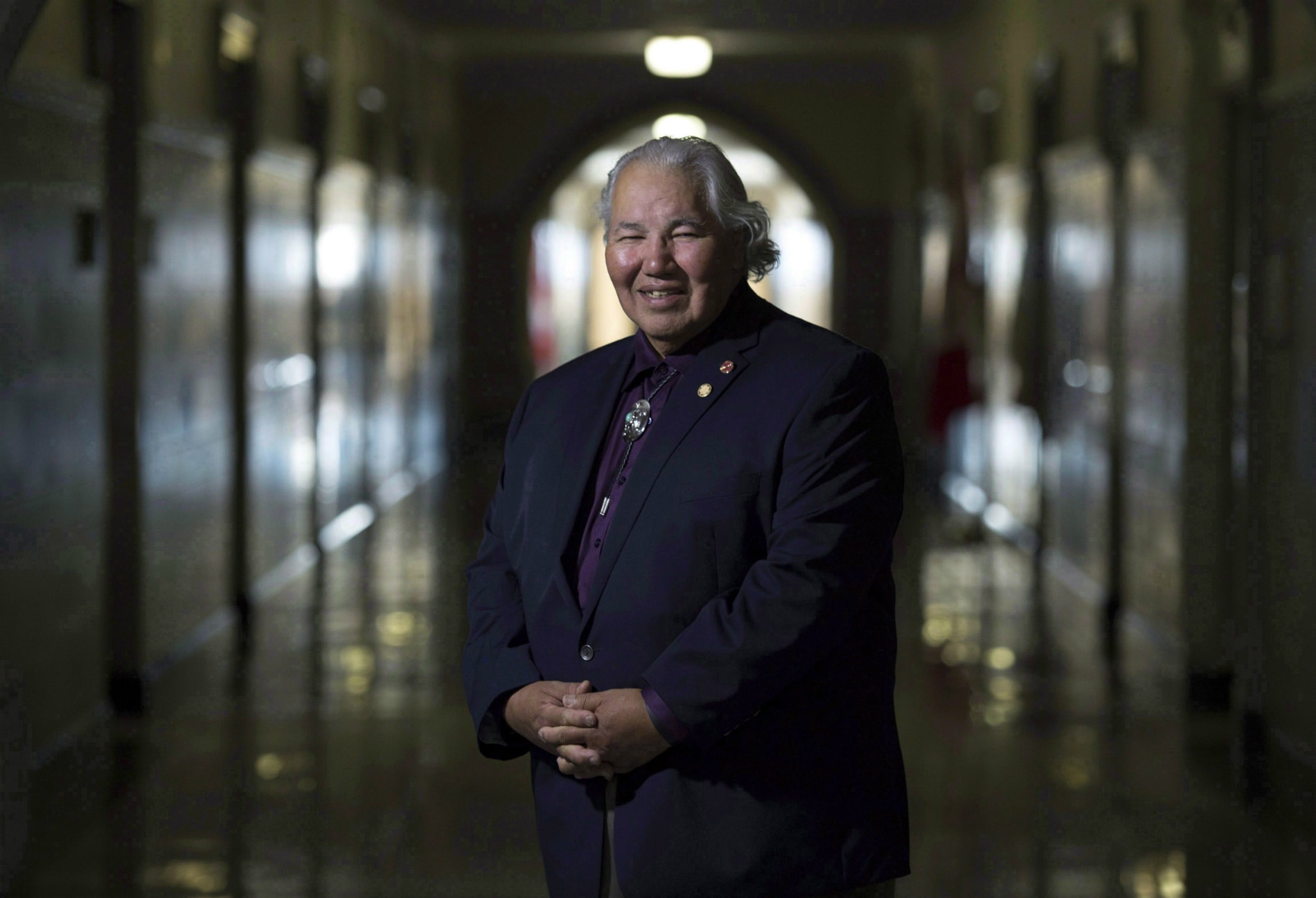 Canadian Senator Murray Sinclair, the former chief commissioner of the Truth of Reconciliation Commission, has said removing statues is not the answer for buiding better relationships between Indigenous and non-Indigenous peoples. THE CANADIAN PRESS/Adrian Wyld

While acknowledging Macdonald “clearly attempted to eliminate Indigenous culture,” Sinclair added: “The problem I have with the overall approach to tearing down statues and buildings is that it is counterproductive to … reconciliation because it almost smacks of revenge or smacks of acts of anger, but in reality, what we are trying to do, is we are trying to create more balance in the relationship.”

As Sinclair suggested, emphasizing the symbolic removal of statues can distract from more substantial and important actions like finding ways to honour Indigenous heroes.

The differing approaches of Sinclair and the mayor of Victoria raise the question: What is the best way of promoting reconciliation? Are symbolic gestures sufficient, or is more required?

It is important to acknowledge that symbols such as statue removal or other gestures can be important.

No one who observed then prime minister Stephen Harper’s apology for residential schools in 2008 will doubt the power and impact of that official gesture. The problem with that effort, though, was that Harper failed to follow it up with positive action.

Harper’s government disappointed Indigenous leaders by not endorsing the United Nations Declaration on Indigenous Peoples, by cancelling funding for the Aboriginal Healing Foundation and by folding the government department that had overseen federal actions to respond to residential school abuse litigation back into the (then) Department of Aboriginal Affairs.

Words without actions were not enough a decade ago. And they do not suffice now.

The distinction between symbol and substance was captured well in an anecdote from South Africa told in my book Residential Schools and Reconciliation: Canada Confronts Its History. University of Calgary law professor Kathleen Mahoney recounted a story of two South Africans — Tabo from the Black majority and Smith from the white minority — brought together in an attempt at reconciliation.

‘What about the cow?’

Smith had stolen Tabo’s cow, destroying Tabo and his family’s livelihood. In the South African Truth and Reconciliation Commission process, Smith apologized and Tabo accepted the statement. They hugged, kissed, had a cup of tea together and even shared a few jokes. When Smith was leaving, Tabo asked: “Mr. Smith, what about the cow?” Replied Smith: “Tabo, you are messing up this thing about reconciliation. It has nothing to do with the cow.”

But, of course, true and effective reconciliation must also be about “the cow.” It must involve going beyond apologizing and renaming buildings to remedying some of the gross injustices from which Indigenous people suffer in Canada.

It means bringing the funding of on-reserve schooling up to the same level other Canadian children receive. It entails energetic action to resolve the approximately 1,000 Indigenous land claims that are outstanding. And it must include completing the treaty process in those parts of Canada where territorial treaties have not yet been made.

The next time some public figure claims the gesture they are advocating will advance reconciliation, such as declaring A National Day of Reconciliation, ask yourself — and that leader — “But what about the cow?”