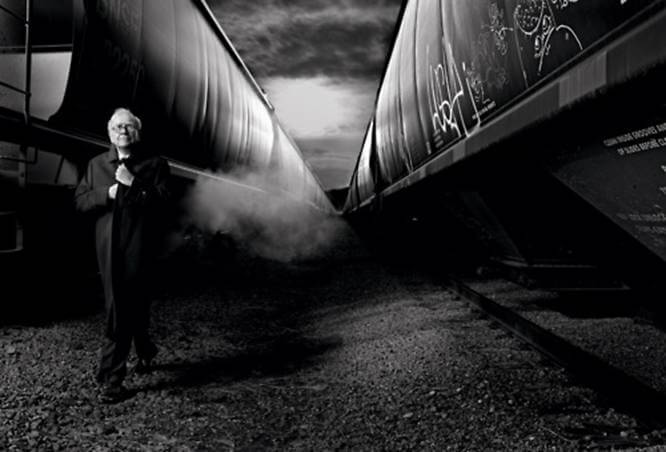 Warren Buffett’s financial and political clout, from Wall Street to the White House, has created a hubris in the “bomb train” magnate matched only by his partner in crime, Bill Gates. As Buffett and Gates rake in millions from shipping Tar Sands bitumen and Bakken Shale crude, however, a storm is brewing in the Pacific Northwest, where the Affiliated Tribes of Northwest Indians (ATNI) are fighting Buffett’s Burlington Northern Santa Fe Railroad (BNSF)–which hopes to cash in big on Crude Zones in Washington State.

In May 2013, ATNI adopted a resolution opposing transport and export of fossil fuels in the Pacific Northwest. On April 7, 2015, Swinomish Indian Tribal Community, an ATNI member tribe, filed suit in U.S. District Court in Seattle to stop Buffett’s oil trains from crossing their reservation at Padilla Bay. Meanwhile, another ATNI member tribe, Quinault Indian Nation, filed an appeal to stop a major oil train terminal on the Washington coast at Gray’s Harbor.

On January 8, 2015, Lummi Nation, also an ATNI member tribe, requested that the U.S. Army Corps of Engineers reject an application by BNSF and SSA Marine to develop a major coal export terminal at Cherry Point–home to an ancient Lummi village and burial ground, as well as prolific Salish Sea crab and salmon fishery, that benefits many Coast Salish First Nations in Washington and British Columbia. As Washington tribes fight Buffett and the fossil fuel exporters, sowers of interracial discord are already on the fossil-fueled payroll.

With the 2007 UN Declaration on the Rights of Indigenous Peoples, indigenous cultural survival is now a matter of human rights. As noted at Earth Ministry in Seattle, whose Interfaith Earth Day on April 21 is devoted to discussing how indigenous rights have encountered indignant wrongs from the coal and oil exporters, the devastating impacts of fossil fuel megaprojects on Native American culture remind us of “our shared responsibility to protect Mother Earth”.

Given the convergence of fossil fuel exporters and white supremacists (i.e. Tea Party and CERA) seeking to terminate American Indian tribes, White Power on the Salish Sea could conceivably become a public safety issue, as it did twenty years ago. Hopefully, the intervention of moral authorities will help keep a lid on organized racism funded by fossil fuel. Alas, The Politics of Land and Bigotry.