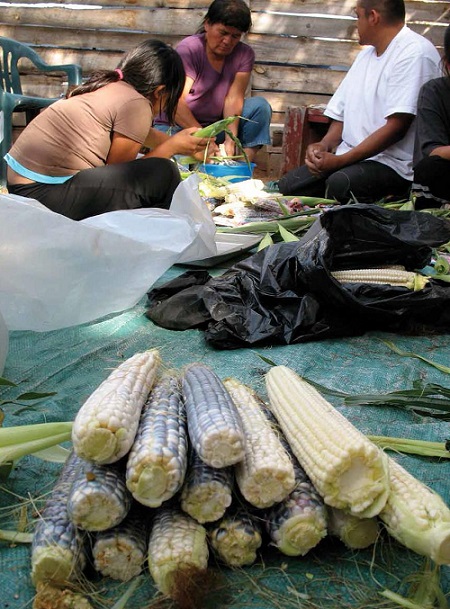 Putting the Culture Back in Agriculture: Reviving Native Food and Farming Traditions

A family on the Navajo Nation in the Four Corners area of the Southwest makes kneel down bread, a traditional food made with blue corn. Photo: Brett Ramney.
Support our journalism. Become a Patron!

“At one point ‘agriculture’ was about the culture of food. Losing that culture, in favor of an American cultural monocrop, joined with an agricultural monocrop, puts us in a perilous state…” says food and Native activist Winona LaDuke.[i]

Her lament is an agribusiness executive’s dream. The CEO of the H.J. Heinz Company said, “Once television is there, people, whatever shade, culture, or origin, want roughly the same things.”[ii] The same things are based on the same technology, same media sources, same global economy, and same food.

Together with the loss of cultural diversity, the growth of industrial agriculture has led to an enormous depletion in biodiversity. Throughout history, humans have cultivated about 7,000 species of plants. In the last century, three-quarters of the genetic diversity of agricultural crops have been lost. Thirty crops now provide 95% of our food needs, with rice, wheat, maize, and potato alone providing 60%. Eighty-five percent of the apple varieties that once existed in the US have been lost. Vast fields of genetically identical crops are much more susceptible to pests, necessitating increased pesticide use. The lack of diversity also endangers the food supply, as an influx of pests or disease can wipe out enormous quantities of crops in one fell swoop.

Native peoples’ efforts to protect their crop varieties and agricultural heritage in the US go back 500 years to when the Spanish conquistadors arrived. Today, Native communities throughout the US are reclaiming and reviving land, water, seeds, and traditional food and farming practices, thereby putting the culture back in agriculture and agriculture back in local hands.

One such initiative is the White Earth Land Recovery Project in Minnesota, which is recovering healthy stewardship of local tribes’ original land base. They are harvesting and selling traditional foods such as wild rice, planting gardens and raising greenhouses, and growing food for farm-to-school and feeding-our-elders programs. They are reintroducing native sturgeon to local waters as well as working to stop pesticide spraying at nearby industrial farms. They are also strengthening relationships with food sovereignty projects around the country. Winona LaDuke, the founding director of the project, told us, “My father used to say, ‘I don’t want to hear your philosophy if you can’t grow corn’… I now grow corn.”

Another revival effort involves buffalo herds. In the 1800s, European-American settlers drove wild buffalo close to extinction, decimating a source of survival for many Native communities. Just one example of the resurgence is the Lakota Buffalo Caretakers Cooperative, a cooperative of small-family buffalo caretakers, on Pine Ridge Reservation in South Dakota. The cooperative sees its work as threefold, to “restore the buffalo, restore the native ecology on Pine Ridge, and help renew the sacred connection between the Lakota people and the buffalo nation.” At the national level, the Inter-Tribal Bison Cooperative is a network of 56 tribal bison programs from around the country with a collective herd of over 15,000.

In New Mexico, Native communities are organizing a wealth of initiatives. Around the state, they have started educational and production farms, youth-elder farming exchanges, buffalo revitalization programs, seed-saving initiatives, herb-based diabetes treatment programs, a credit union that invests in green and sustainable projects, and more. Schools like the Southwestern Indian Polytechnic Institute, the Institute of American Indian Arts, and the Santa Fe Indian School – along with grammar schools, high schools, and non-profit programs – have developed agricultural education programs. The Traditional Native American Farmers’ Association helps farmers get back onto the land, hosts workshops on seed saving and agricultural techniques, and has a youth program.

The annual Sustainable Food and Seed Sovereignty Symposium at the Tesuque [Indian] Pueblo in northern New Mexico brings together farmers, herbalists, natural dyers, healers, cooks, seed savers, educators, water protectors, and community organizers. From the 2006 symposium came the Declaration of Seed Sovereignty, which denounced genetically engineered seeds and corporate ownership of Native seeds and crops as “a continuation of genocide upon indigenous people and as malicious and sacrilegious acts toward our ancestry, culture, and future generations.”

In addition to the symposium, the Tesuque Pueblo also hosts Tesuque Natural Farms, which grows vegetables, herbs, grains, fruit trees, and cover crops, including varieties long lost to the region. The project is building a Native seed library. The overarching goal is to make the Pueblo autonomous in both food and seeds. Emigdio Ballon, Quechua farmer and geneticist at Tesuque Natural Farm, said, “The only way we can get our autonomy is when we have the resources in our own hands, when we don’t have to buy from seed companies.”

The farm provides fresh foods to the senior center, sells at the farmers’ markets, and trains residents to begin farming themselves. The farm also grows medicinal herbs to treat HIV, diabetes, and cancer, and makes biofertilizer from plants. The preschoolers at the Head Start program garden; grammar school students are beginning to, as well.

People from across the nation come to Tesuque Natural Farms to study agricultural production and to take workshops on pruning, beekeeping, poultry, soil fertility, composting, and other topics. Soon the farm hopes to create a research and education center, where people can come for three to six months.

Nayeli Guzman, a Mexica woman who worked at the farm, said, “What we’re doing is very simple. These ideas are not an alternative for us, they’re just a way of life… We need to all work together as land-based people.

“Creator is not exclusive, so there’s no reason we should be,” she said. “They tell us, ‘The more biodiversity you have, the richer your soil is going to be.’ It’s like that with people. The more different kinds of people you have, the more able we’re going to be to survive. We can’t compartmentalize ourselves. That’s what industrial agriculture does.”