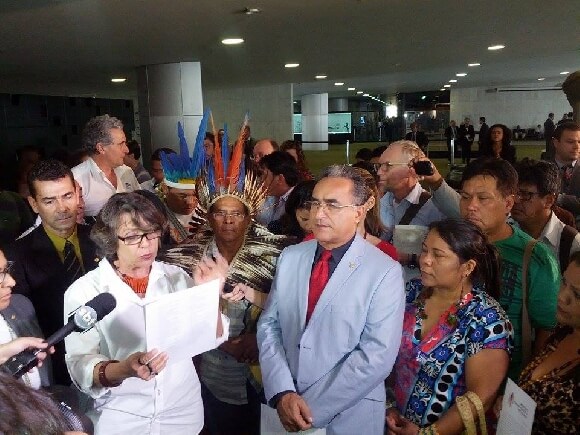 Indigenous Peoples, parliamentarians, organizations and social movements participated in a June 11 ceremony to launch a manifesto in opposition to the proposed constitutional amendment known as PEC 215, in the House of Representatives. Signed by 70 entities, the document was delivered to representatives who are members of the Parliamentary Fronts in Support of Indigenous Peoples, in Defense of Human and Environmentalist Rights.

Representative Erika Kokay (PT-DF) read the document and stressed that this is an action to guarantee the defense of indigenous rights. Fighting PEC 215 is, for Kokay, “to defend our Brazilianness and our communities. It will not pass,” she emphasized. According to the document, “PEC 215 and its appended action are intended to paralyze the demarcation of indigenous lands, the titration of Quilombola Territories and the creation of Units of Conservation, as well as to permit the approval of large-scale projects within these protected areas, such as: hydroelectric dams, mining, extensive agribusiness, the building of highways, waterways for industrial transport, ports and railways.”

Congresswoman Janete Maria Goés Capibaribe (PSB/AP) believes that the movement is gaining greater strength thanks to the mobilization of Indigenous Peoples and, for her, the continuity of this movement is what will guarantee the shelving of the PEC 215. Congressman Edmilson Rodrigues (PSOL / PA) said the manifesto will be worked into a document and presented in the Special Commission. For him “this manifesto is from the Brazilian people.”

He also recalled the speech by some members of the ruralista (agribusiness) caucus who believe the fight is for too much land for too few Indians. The data presented by him show that 37% of the lands are in the hands of agribusiness, and of these, only 7% are productive lands. “The House will have to bend. The PEC will not pass,” he concluded.

Paulo Pimenta (PT-RS), Chairman of the Human Rights Commission, which recently traveled on a mission in Mato Grosso do Sul to become familiar with the reality of some Indigenous communities, cited in the recent decisions of the 2nd Session of the Federal Supreme Court (STF) that raised the question of the ‘temporal marker’, generating legal uncertainty in all of the land demarcation proceedings. “We were in Mato Grosso do Sul (MS) and as soon as we left there were three attacks. Because of the PEC, these issues are being resuscitated,” he observed.

Representing the National Commission on Indigenist Policy (CNPI) and the Indigenous Council of Roraima (CIR), Pierlangela Wapichana thanked all of the signatories and declared: “This manifesto is proof that there are more people who are defending our cause. You are defending life; the lives of those who do not speak Portuguese and who have been having had their rights violated since 1500.”

In the opinion of Representative John Daniel (PT/SE) the PEC 215 represents the greed of capital against [the Brazilian] people. He took the opportunity to congratulate all Indigenous Peoples for the mobilization and recent achievements, such as engagement in the Senate which resulted in 48 signatures in opposition to PEC 215.

Hawaty Tuxá, from the Mãe village in Rodelas, in northern Bahia, representing the Articulation of the Indigenous Peoples And Organizations Of the Northeast, Minas Gerais and Espírito Santo – (APOINME) and the CNPI defined the act as a transformative hope with the ability to “touch” the National Congress so that it attends to the atrocity that is about to be committed in this House. At the same time, he believes that this moment also represents a call to Brazilian society that, in defending indigenous rights, they will be defending national sovereignty, our history and, by recognizing this, the importance of the indigenous peoples of Brazil.

This article was originally published in Portuguese at www.cimi.org.br. Translated to English for Intercontinental Cry. Translation by Meg Kidd.

On May 19 of 2015, the House of Representatives, social organizations and movements, of the indigenous peoples, indigenous and environmental advocates, along with the Parliamentary Fronts for the Support of the Indigenous Peoples, in Defense of Human and Environmental Rights. the undersigned, brought to the Plenary session of the House “Threats to fundamental rights and PEC 215: democracy, indigenous peoples and the environment”. As a result of the Plenary, by common accord it was decided to publish the following motion of repudiation of the Proposal for a Constitutional Amendment (PEC) 215/2000, pending before the Brazilian House of Representatives (Câmara dos Deputados) currently in the Special Commission.

The PEC 215 and its appended actions are intended to paralyze the demarcation of Indigenous Lands, the titration of Quilombo Territories and the creation of Units of Conservation, as well as to permit the approval of large-scale enterprises within these protected areas, such as: hydroelectric dams, mining; extensive agribusiness, the building of highways, waterways for industrial transport, ports and railways.

If approved, the referred to PEC 215/2000 will result in irreversible consequences for the indigenous peoples and quilombola communities, considering that their territories are vital to their physical and cultural survival, in addition to contributing to the preservation of an ecologically balanced environment, in the context of global warming.

The PEC 215/2000 is declared to be unconstitutional, for injury to binding clauses related to the principle of the separation of powers and the consecration of fundamental rights of indigenous peoples, that as such are constitutional shields and supported in international standards.

In view of this and considering that:

The signatories listed below RESOLVE to manifest their total support in the struggle of the Indigenous Peoples, the Quilombola Communities and Brazilian Collectivity and demand the immediate withdrawal from legislative process the PEC 215/2000, the appended proposals and any other initiatives that serve to suppress or regress on the rights of indigenous peoples, of the quilombola communities and on the recognition of Units of Conservation.