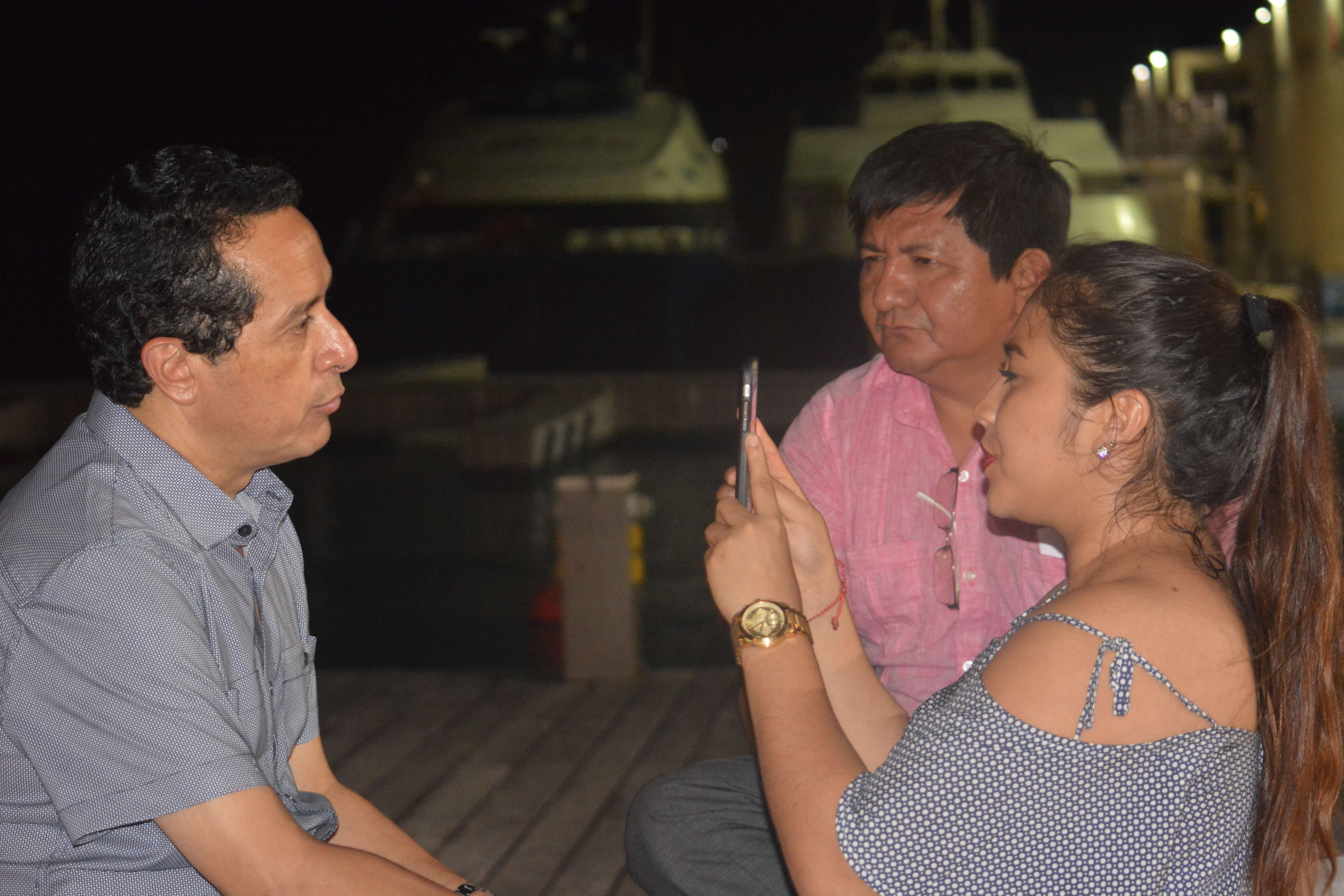 Five days ago, the tropical island of Holbox, off Mexico’s Yucatan Peninsula, caught fire. Reports of smoke billowing over the uninhabited southern tip of the island were first shared over social media on Saturday afternoon, Sept. 17, while Pedro Canché, known across the Yucatan as “the Maya journalist”, prepared to interview Carlos Joaquin, the Governor-Elect of the state of Quintana Roo.

As Pedro Canché traveled with his star-reporter Mary Hernandez to the island of Cozumel where he planned to meet the Governor-Elect, the first photos revealing the magnitude of the blaze on Holbox were sent to him over WhatsApp by concerned locals. There was still no official word on the fire from a government agency—but it was the long-weekend celebrating Mexico’s independence—and the buzz on social media was that public officials from the outgoing administration of Governor Roberto Borge were still asleep or hungover. 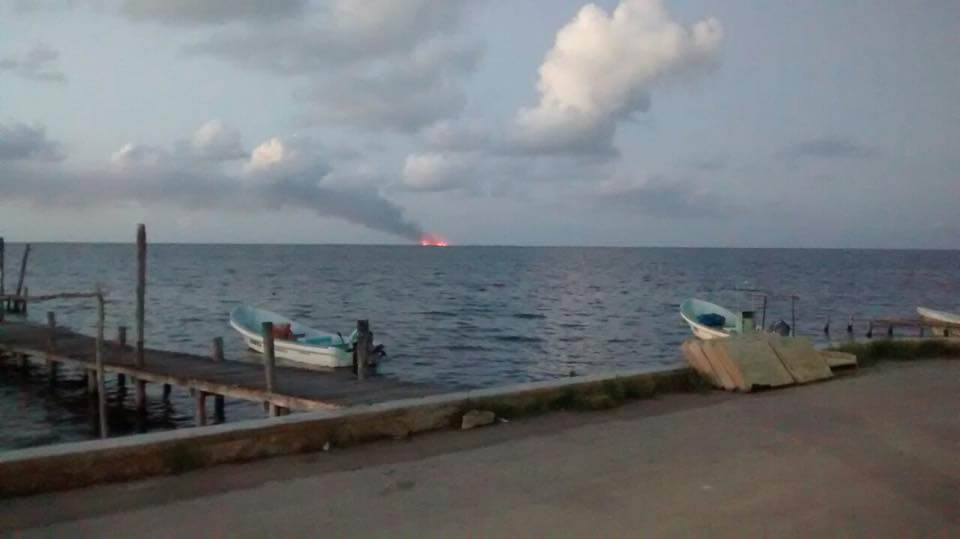 A photo of the fire in Holbox from the fishing village of Chiquila.

As the Maya journalist tweeted and shared the photos of black-smoke blanketing the sky above verdant green mangroves to his massive social-media following, the blaze in Holbox began to trend across the Yucatan. It was the third time in as many days that Canché and his team of reporters at Pedro Canché News had set the agenda and scooped the region’s own cumbersome local media—with Enrique Huerta’s article on Uber’s arrival to Quintana Roo receiving over 20,000 hits for the newspaper on Thursday alone, and Mary Hernandez’ Friday-night video of police detaining protestors during Mexico’s independence festival racking up a fearsome 80,000 views.

The exclusive interview with Carlos Joaquin, eight days before he assumed the Governorship of Quintana Roo, was another media-coup for the young news organization. Less than a year after Pedro Canché was released from prison on trumped-up charges of “sabotage” and “terrorism” in a court-case that Reporters Without Borders called absurd and human rights organizations denounced as political persecution by Governor Borge’s outgoing government—the online newspaper the Maya journalist founded shortly after his release was now a force to be reckoned with across the Yucatan Peninsula.

As Canché roamed Cozumel’s main plaza waiting for word on the meeting place with the Governor-Elect, a chance encounter with Pedro Joaquin Coldwell, the incoming Governor’s half-brother and powerful Minister of Energy in President President Peña Nieto’s cabinet, was another fortunate turn of events that evening. “Pedro Canché you are very famous.” said the Minister of Energy. “Pedro Joaquin you sir are famous too.” replied Canché, who then goaded the Minister into accepting a live-streamed interview to his Facebook followers.

An hour later, Canché met with the state’s incoming Governor on Cozumel’s main wharf. The interview now has over 42,000 views, 977 shares, and almost a thousand comments. Meanwhile, as the video went viral, the blaze on Holbox continued to burn.

“The current government is saying the fire is under control,” Pedro Canché told IC after the interview, “but I don’t believe it from the photos so we have to find out for ourselves.”

The tropical island of Holbox is home to pristine mangrove ecosystems and shrubby sand-dune forests that form part of the protected Yum Balam biosphere reserve. Designated as a protected reserve 20 years ago, the Yum Balam biosphere stretches from the coast to the island and out into the Caribbean, beating the beginning of the tourism boom in Holbox by 5 years. In the last 15 years, however, the same over-development that has destroyed much of the coastal wilderness around Cancún has caught up to Holbox. It now threatens to overtake the fragile environmental protections in place for the island.

On Sunday, Canché and Hernandez drove four hours from Playa del Carmen to the Yucatan’s eastern coast where they caught the last ferry to Holbox that night. The harvest moon was red as it hung low over the smoke blanketing the horizon while two distinct fires glowed orange in the distance.

At 11:30pm, Pedro Canché’s first live-stream interview with a resident from the island was with Edgardo Zapata, born 72 years ago on Holbox, and part of the Ejido Council on the island in charge of common lands outside the village. He recounted a meeting with government figures, such as Felix Gonzales Canto, and Fernando Ponce, the powerful representative of Coca-Cola on the Yucatan, in which he alleges the local Ejido title-holders were tricked into signing over their common-land-rights, so the private company Peninsula Maya Developments could build hotels on the undeveloped part of the island. “They took advantage of our innocence but not our ignorance,” Zapata proclaimed, calling the politicians ‘bandits’. The case is now in the Mexican Supreme Court.

Illegal land-grabs by powerful robber barons are nothing new to the Maya Peoples; but they have become a frightening modern-day trend under the regime of Governor Borge. The most famous cases are the annexation of private hotels in Tulum and the destruction of Tajamar, an area of mangrove forest in downtown Cancún that was cleared to make way for a high-rise. In both cases, the Government and its cronies have acted with absolute impunity. They’ve even been compared to cut-throat pirates in Mexican media.

Canché estimates that, of the hundreds of thousands of visitors to Pedro Canché News every month, less than 30% are indigenous Maya. While the Editor-in-Chief is himself Maya and his reporter Mary Hernandez’ mother is from the Chol Peoples of the neighboring state of Chiapas, Canché says that his newspaper’s brand of adversarial breaking news and current affairs is for the people—all the people.

There was, however, another angle that Canché wished to pursue while investigating the suspicious origin of the blaze at Holbox. In 2015, 14 Maya from Holbox were charged with clearing slithers of mangrove forest for their motorized canoes and wooden fishing boats and subsequently sent to prison. If the fire was indeed caused by Peninsula Maya Developments to clear land to build massive hotels and nobody was held to account—then it was further proof that in Quintana Roo there are rules for the rulers and rules for the ruled.

On Monday morning, Canché and Hernandez rented a boat to accompany the assembled volunteers who had left at dawn in an attempt to control the fire. Firemen from Conafor (National Commission of Forestry) had used machetes to open up a 500-meter path through the thick shrub toward the smoking periphery of the fire. Estimates from both the air and the ground of the damage caused by the blaze now ranged between 35 to 50 hectares.

It took an hour to cross the ash and charcoaled shrub before the pair of reporters encountered the firemen who were using picks and rakes to scrape the still-smoking embers away from the green vegetation on the fire’s periphery. The firemen were exhausted, but said the blaze was under control. Pedro Canché and Mary Hernandez interviewed the leader and took photos before making their way back to the boat. 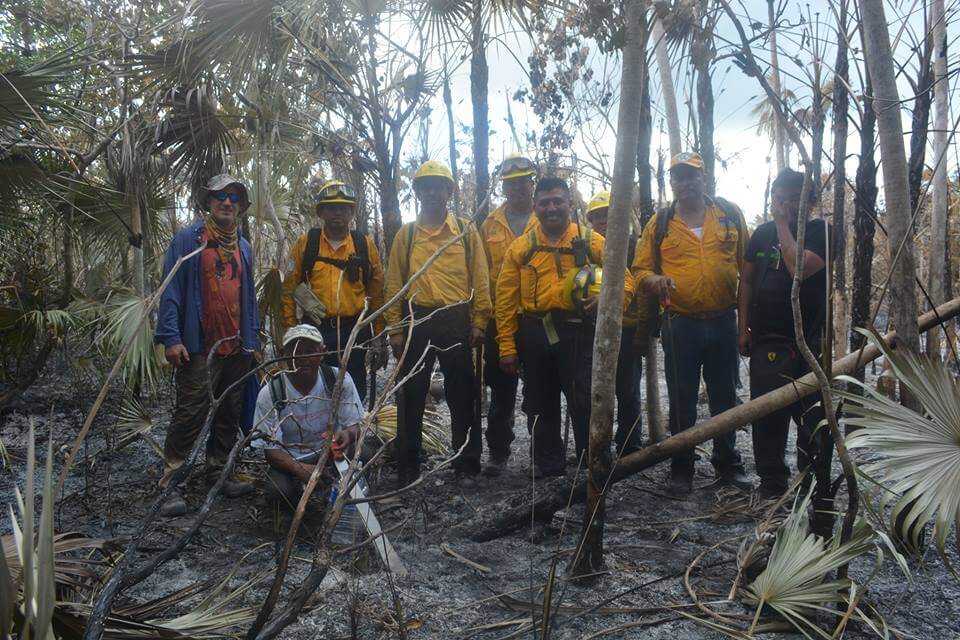 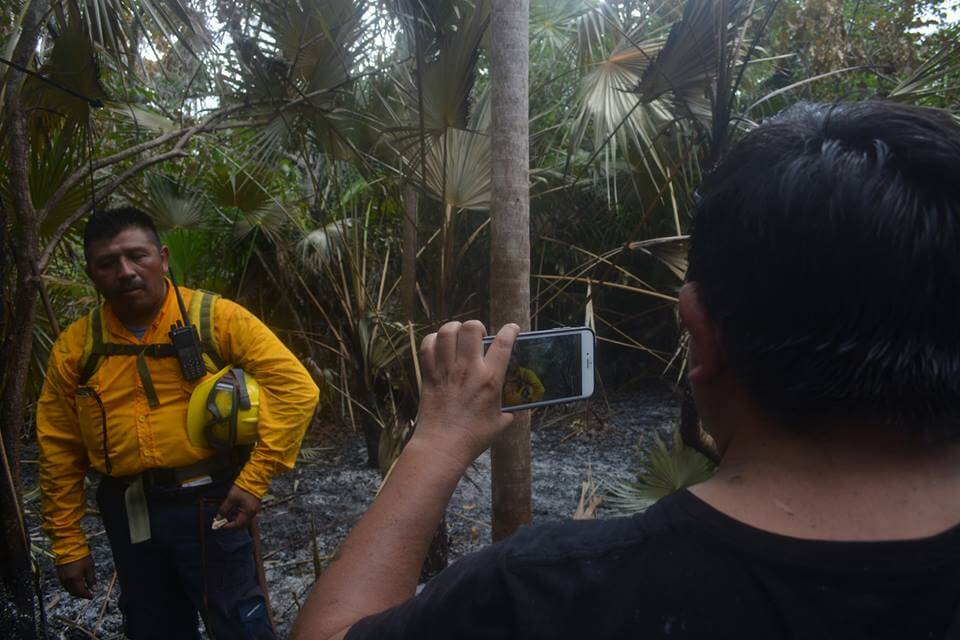 In the village of Holbox, Mary Hernandez interviewed Rafael Leon Negrete, the director of Conafor, who said the fire spread more towards the part of land that belongs to the ejido (commons) of the people. “It’s quite suspicious the circumstances of the fire.” he said, “Profepa (Procuraduría Federal de Protección al Ambiente) will investigate the cause once we put it out.”

Pedro Canché News published an eyewitness report with testimonies of the first-responders from ground-zero as well as a video that racked up 11,000 views in 48 hours. On Monday afternoon, the first helicopters from the Mexican Navy arrived and made a late but ostentatious show of rumbling across the sky over the populated part of the island towards the smoke in the south—but the blaze had almost been put out and locals paid little heed. 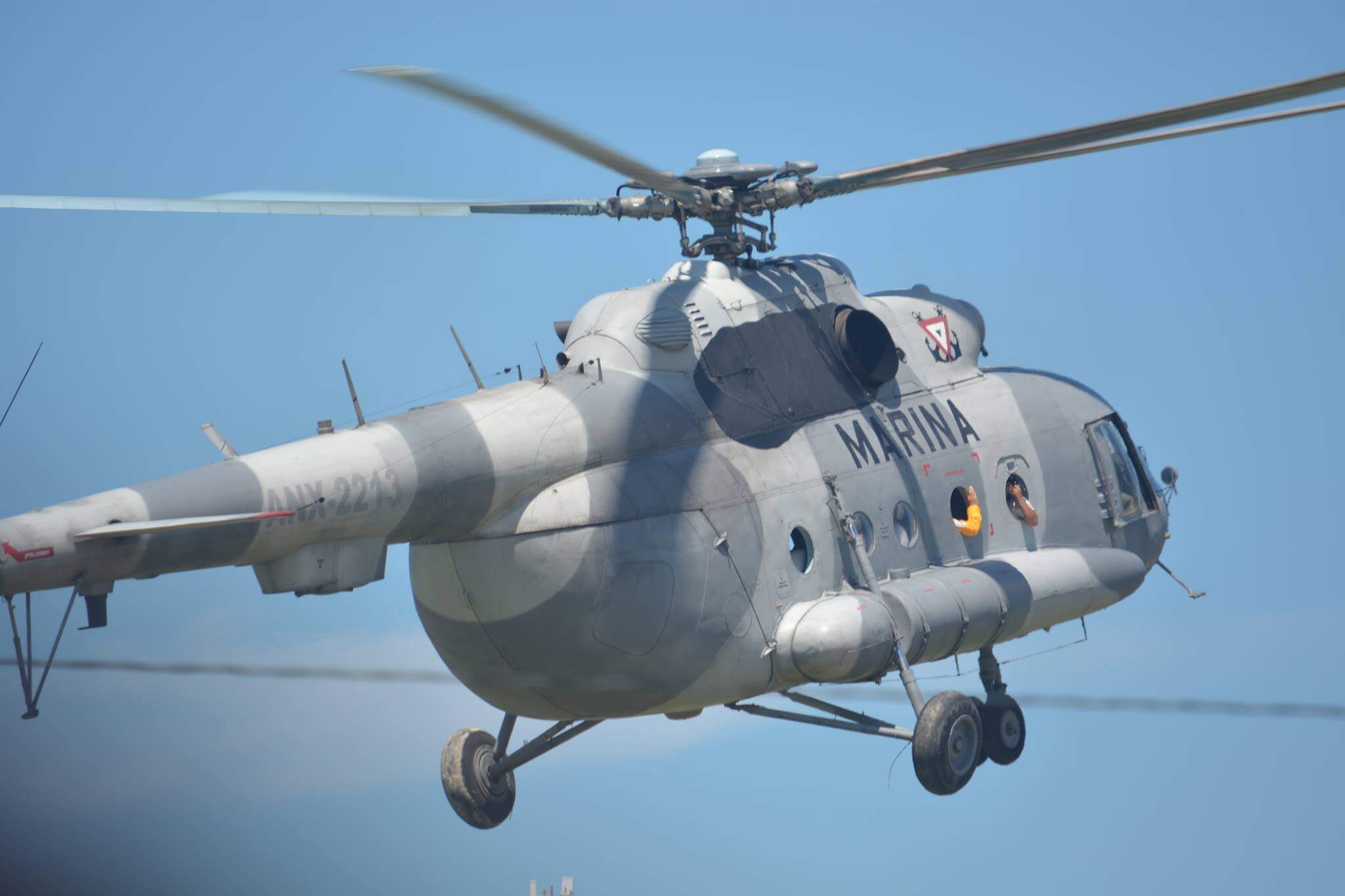 It was time for Editor-in-Chief Canché to focus his attention on the next most pressing issue for his young and energetic newspaper: the 21,000 hits on Pedro Canché News for Thursday’s article about Uber had overloaded the server and caused it to crash. It was time to upgrade and move to a bigger hosting company.

The blaze in Holbox is all but gone, but the Maya journalist and his team of reporters at Pedro Canché News are still on fire.

Jake Ling writes for Intercontinental Cry and is providing the design and tech assistance to Pedro Canché to build his newspaper Pedro Canché News.