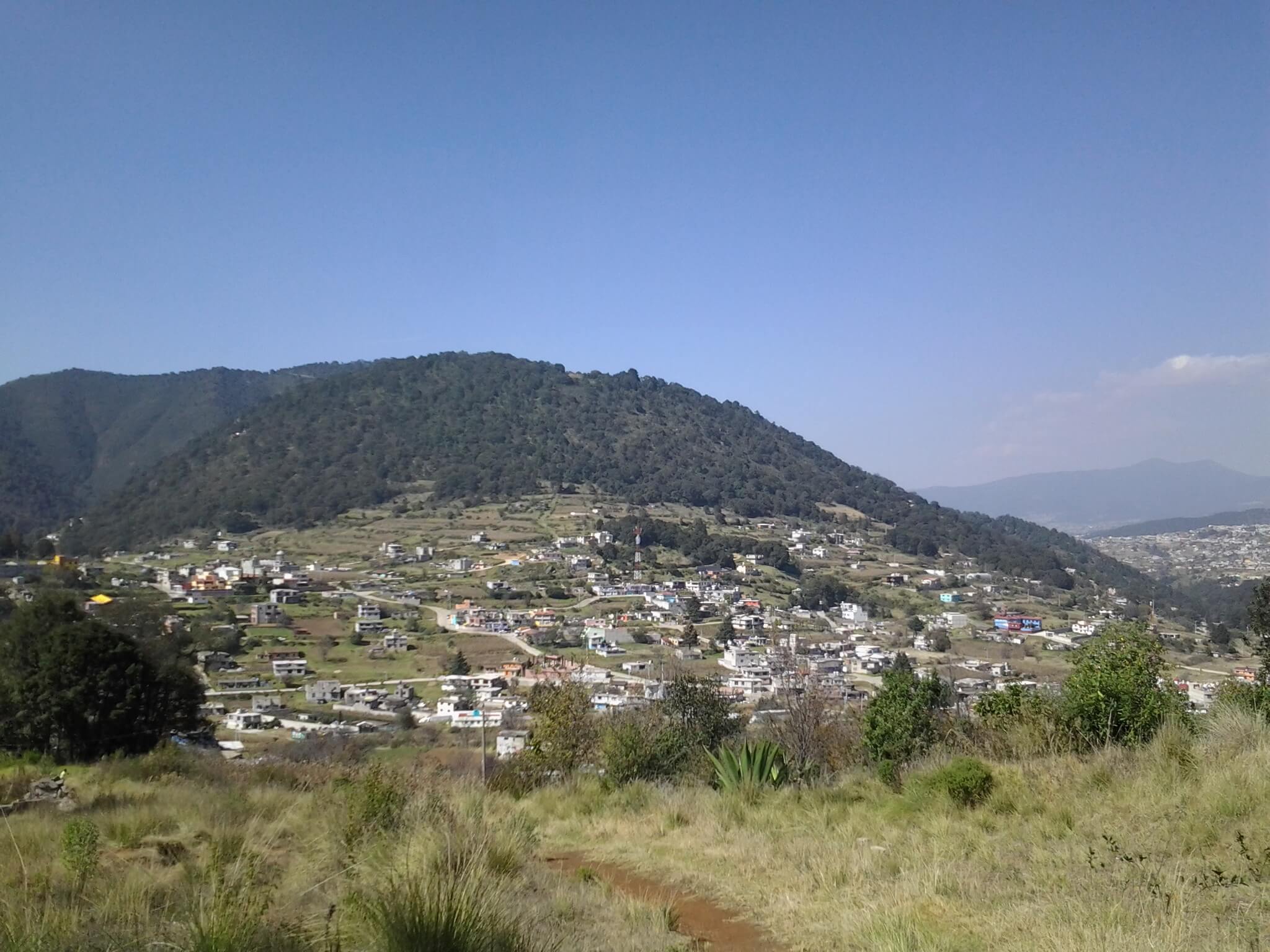 The gap in the tree line—high above on the cerro—is clearly visible from the main road into the pueblo. Like a permanent scar on the landscape, it serves as an ominous reminder that the infrastructural tentacles of Mexico City have extended 54 kilometers northwest into the Ñatho (Otomí) Indigenous Community of San Franscisco Xochicuautla.

I first became familiar with this comunidad of nearly 4000 people a year ago when its council—alongside 10 other Indigenous nations’ governments—agreed to sign the Joint Statement of Constitutional and Customary Indigenous Governments—a call for a new intergovernmental framework mechanism between nations and states, presented to the United Nations Permanent Forum on Indigenous Issues in June 2014.

Having accepted their council’s invitation to visit the community during a recent trip to Mexico, I was eager to meet with their leaders in person and learn more about the looming changes to their ecological niche.

Since 2007 (when the project was first announced), community members of San Fransisco Xochicuautla have resisted the building of a super highway from the Toluca Airport to Naucalpan in the central State of Mexico—a megaproject that would destroy more than 600,000 square meters of their sacred forested lands, the production of 250 million liters of water per year (a major source of water for Mexico City), ancestral pilgrimage routes, and the habitat for numerous endangered species. “To us”, commented a council member, “this is a matter of life and death—honoring the lives of our ancestors and our future generations by trying to prevent the death of the forests that sustain us.”

Not surprisingly, given the Mexican government’s track record, the contract for the Toluca-Naucalpan highway was awarded to Grupo Higa, a company owned by the infamous contractor Juan Armando Hinojosa Cantú—by the [then] Governor of the State of Mexico, [now] President Enrique Peña Nieto—who currently lies at the center of a major political scandal.

Infiltration of money has reached San Fransisco Xochicuautla residents as well. Parcel by parcel, land owners—standing in the highway’s path—have been offered roughly 40,000 pesos (about $2,800 US) for their land, causing a massive rift between those community members who’ve sold and those who’ve chosen to organize a resistance to the project.

“When our town organized itself into assemblies according to our constitutional and customary Indigenous practices,” council members noted, “certain community members—representing only 3% of the total inhabitants—held separate meetings and decided to back the project.”

The developers—and municipal and state governments—described this as a “consultative process.” Soon, workers from the construction company, under the protection of public “Citizen Security” forces of the State of Mexico, began cutting down trees—and continue to do so—even though an amparo [court injunction] was issued, nullifying the “assemblies” held to grant permission to the project.

Just a short hike uphill from where our meeting took place, I was shown how devastatingly close the highway’s brazen path comes to their community. “This home here,” a community member points out, “has been sold and will be destroyed.” And over there, you can see the patchwork of other lands that have already been carved up.”

As we gaze out over the denuded forests, the visceral despair of San Franscisco Xochicuautla community members is palpable. But, unfortunately, their experience is not unique. 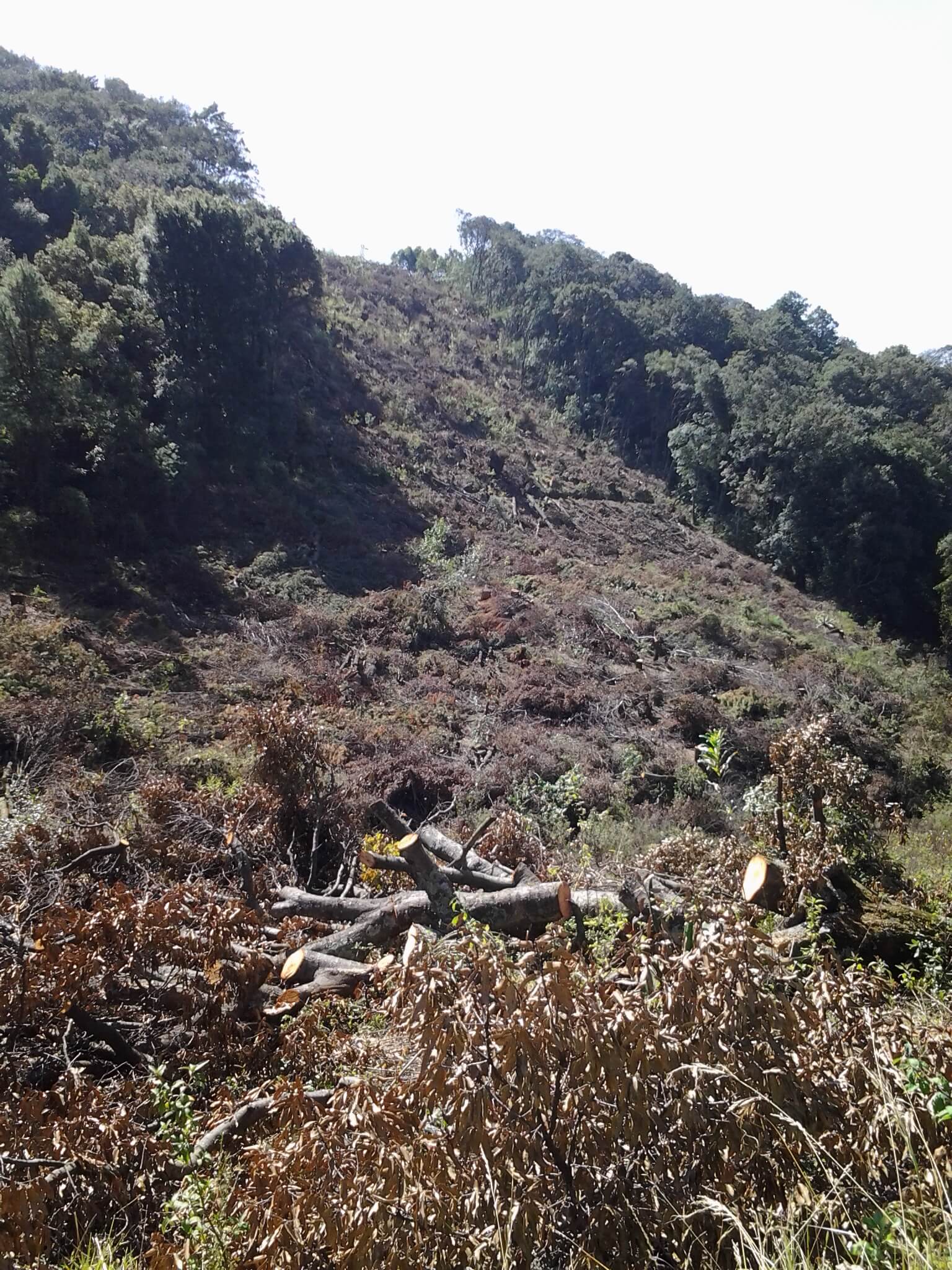 Infrastructure projects—in the name of economic development and modernization—are churning in bio-cultural niches throughout Mexico (and the world), without the free, prior and informed consent that Article 10 of the United Nations Declaration on the rights of Indigenous Peoples explicitly details.

Equally as alarming is the fact that expanded highway systems, under the banner of development ideology, often pave the way for military expansion as well—something the Mexican government and its northern neighbor, the United States, say is necessary to carry out the “War on Drugs”.

Yet, according to a North American Congress on Latin America (NACLA) report, “ the chilling reality is that the majority of U.S. security assistance flowing to Mexico [and Central America] is going to police and military forces that only two decades earlier were engaged in horrifying acts of killing and torture against political opponents and Indigenous communities.”

San Francisco Xochicuautla has experienced aggression on the part of security forces. In October and November of last year, community members were violently arrested for demanding to see documentation that justifies the destruction of the forest in violation of international treaties and the local amparo.

Jaime Vargas, a local pediatrician and council member, who hosted me and graciously tended to my sick son, was fired from his position in a regional government medical center for his involvement with the resistance movement. “I now operate a small practice out of my home,” he noted as he showed me around his converted living space—“supported by the donations of local community members.”

As with Indigenous communities the world over, the Ñatho (Otomí), who are viewed as an impediment to growth and modernization, are represented by state’s governments who claim to have their best interests in mind, especially in the international arena—yet, whose domestic actions demonstrate a entirely different agenda.

One of the greatest challenges to Indigenous nations is that in their attempt to advance self-determination rights, they utilize the very state-derived systems (legal, economic, and/or constitutional) that marginalize them.

At times new laws, amendments or, as in the case of San Fransisco Xochicuautla, an injunction to halt the highway project can lead to positive incremental change. Lasting change that honors the government-to-government relationship Indigenous nations deserve to have with states’ governments, will only come when states and nations sit at the same negotiating table—both as active participants and voters.

“The majority of the world’s current conflicts are not actually between states’ governments (i.e. Germany vs. France),” I comment to council members, over a meal with blue corn tortillas hechos a mano. “Rather they are between nations and the states that surround them. It is this reality that provides Indigenous nations with a great deal more political leverage than they assume.”

As they considered this reality, questions from the council members flowed—as did their generosity of food.

Still glowing from having hosted a two-day segment of the first Worldwide Festival of Resistances Against Capitalism in December, San Fransisco Xochicuautla council members were eager to learn more about forming alliances with the other Indigenous governments.

With federal congresses, supreme courts and executive offices owing their positions to corporate powers, where, specifically, should Indigenous nations’ governments direct their frustrations?

Direct, multilateral alliances between Indigenous governments—that define a specific set of political goals–offer a potential starting point. The Center for World Indigenous Studies stresses that governments engaged in such alliances must not pretend to represent all Indigenous peoples, only their own constituencies.

Rather than relying solely upon non-governmental organizations or states’ governments to assert their interests, Indigenous nations can begin using their own constitutional and customary political institutions—to achieve political equality and put the brakes on capitalism’s mega-projects.