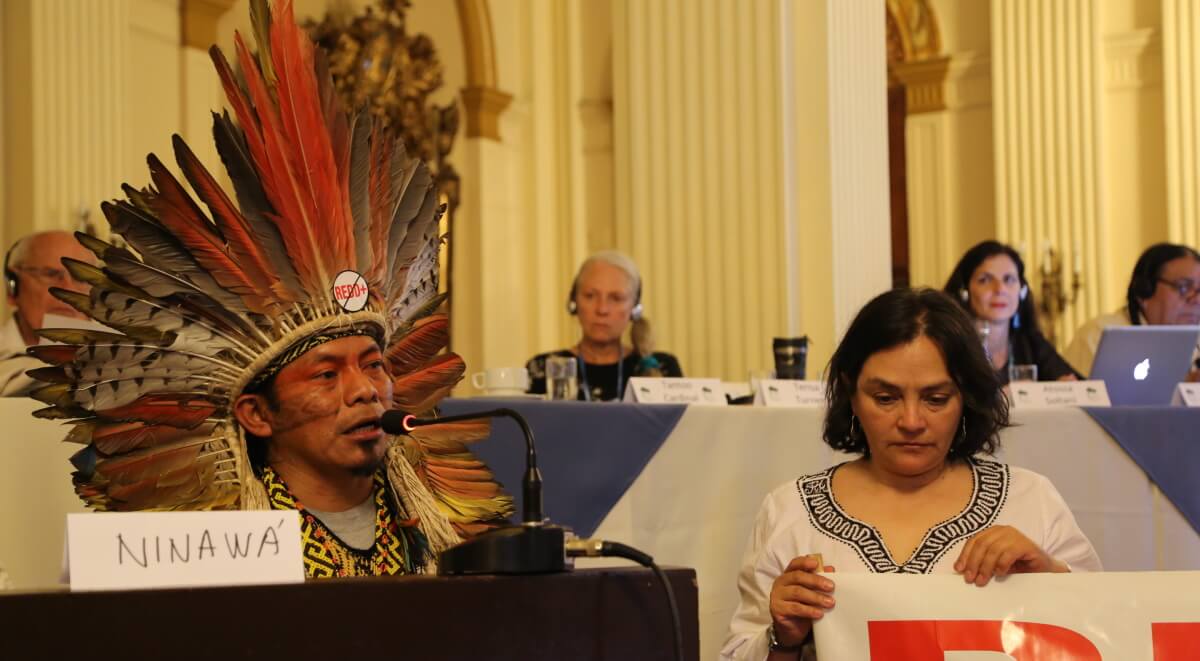 According to Alberto Acosta, president of the Tribunal and former president of the Constitutional Assembly of Ecuador, the rights of nature must have a universal validity. “This ethical tribunal arises when States fail to fulfill their obligation to preserve the lives of living beings,” said Acosta. “As long as nature is seen as property in law, there can be no justice for communities, the climate or nature.” 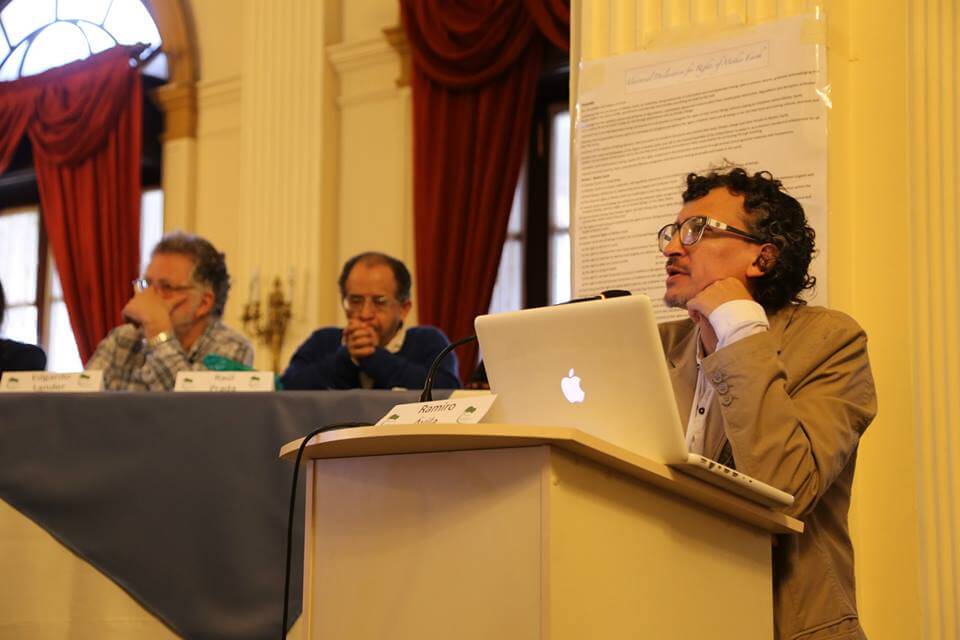 Acosta led the 13 judges through 12 cases

The Tribunal was dedicated to Shuar leader, José Tendentza, who was found murdered just days before the Tribunal. Tendentza of Southern Ecuador was scheduled to present the Condor Mine case. Acosta led the 13 judges through 12 cases that were determined by the judges to demonstrate egregious violations to rights of nature and human rights. Cases included:

Of the cases, the oil exploitation of the Yasuni territory of Ecuador was condemned in addition to the relentless persecution Yasunidos are facing for their dissent. Since 2013, the Ecuadorian government green-lighted oil drilling in Yasuni National Park, one of the most biodiverse areas in the world and home to two indigenous nations in voluntary isolation.

In protest, a group of young Yasunidos joined together to claim the rights of nature, which are guaranteed in the Constitution of Ecuador. They collected more than 800,000 signatures to call for a referendum on the oil exploitation, but their request was rejected by electoral institutions. The Yasunidos are now suing the Ecuadorian government, led by President Rafael Correa, and are waiting for their complaint to be reviewed by the tribunal of the Inter-American Commission on Human Rights (CIDH).

Additionally, the Tribunal for the Rights of Nature found Chevron-Texaco in Ecuador to be guilty of using inappropriate technology and causing irreversible damage to the environment. They determined that the corporation must fully compensate those affected by the environmental impact.

The Peruvian cases of Conga and Bagua were accepted as threats of violation to the rights of nature. An international special commission was appointed to visit the impacted Amazonian basins to collect more information on the contamination.

The case of the mining project in the Cordillera del Condor was found by the Tribunal to be in direct violation of the rights of nature. They determined that mining must be suspended and those affected must be compensated. They urge the state to investigate and punish those responsible for the death of José Tendentza, the prominent social activist that was in opposition to the mining. 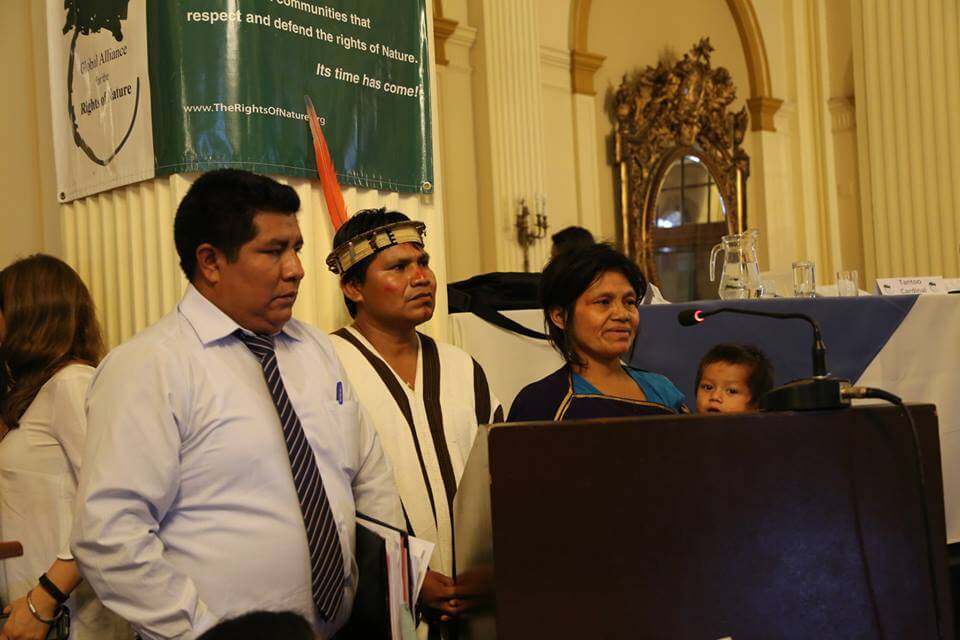 The Peruvian cases of Conga and Bagua were accepted as threats of violation to the rights of nature. An international special commission was appointed to visit the impacted Amazonian basins to collect more information on the contamination.

Shannon Biggs, director of Movement Rights, shared testimony on the impacts of fracking [Hydraulic Fracturing], a process of extracting natural gas from shale rock layers deep within the earth. “You cannot do safe fracking,” said Biggs. “This technique should have never been invented. It is one of the most destructive activities against the environment ever seen.”

According to Biggs, 800,000 active oil and gas wells are being fracked in the United States, producing roughly 300,000 natural gas barrels per day. Severe water pollution and earthquakes have been linked with fracking. “We die from fracking. The population is suffering from cancer; my sister has died,” said Casey Camp-Horinek (Ponca) of Oklahoma in her testimony. “The water is contaminated; we cannot fish. We are in danger of extinction.”

Plans to develop large-scale hydraulic fracking in Bolivia were reported by Martin Vilela of Platform Climate Reaction. In recent years the country has increased the production and export of natural gas. 82.4% of its production is exported, generating more than six billion dollars a year. Bolivia has 8.23 trillion cubic feet of gas, and YPFB plans to invest over 40 million dollars between 2013 and 2015. Vilela explained that in 2013 this corporation signed an agreement for fracking in the Chaco area, a region with water scarcity to extract 48 trillion cubic feet of shale gas. Estimates determine that this would consume between 112 and 335 billion liters of water.

Bassey warned that climate change will have catastrophic consequences. “For every degree the temperature rises globally, in Africa it will rise an additional 50%.” In 2012 floods in Nigeria led to the relocation of 6 million inhabitants. Bassey speculates that in 2030 Africa violent conflicts will increase by 54% due to the lack of access to natural resources.

At the hearing on “false climate solutions,” geoengineering techniques that seek to manipulate climate without changing the conditions that cause climate change were reviewed.

REDD+ was also put on trial. President of the Huni Kui people of Acre, Brazil, Ninawa Kaxinawá (Hunikui) testified that “REDD is a lie. We do not accept putting nature on market because it is our soul and spirit; it is priceless, it is our voice.”

According to Ruth Nyambura, of the Biodiversity Network Africa, says that in Kenya, evictions are occurring as a result of REDD. “Four indigenous people were arrested,” said Nyambura. “A woman was hit by the forest service because she was outside of her land.”

The Tribunal is calling for a special hearing in Paris in 2015 to coincide with the upcoming UN COP 21 summit.

Article originally published at Indigenous Rising, a publication of the Indigenous Environmental Network. Republished with permission.