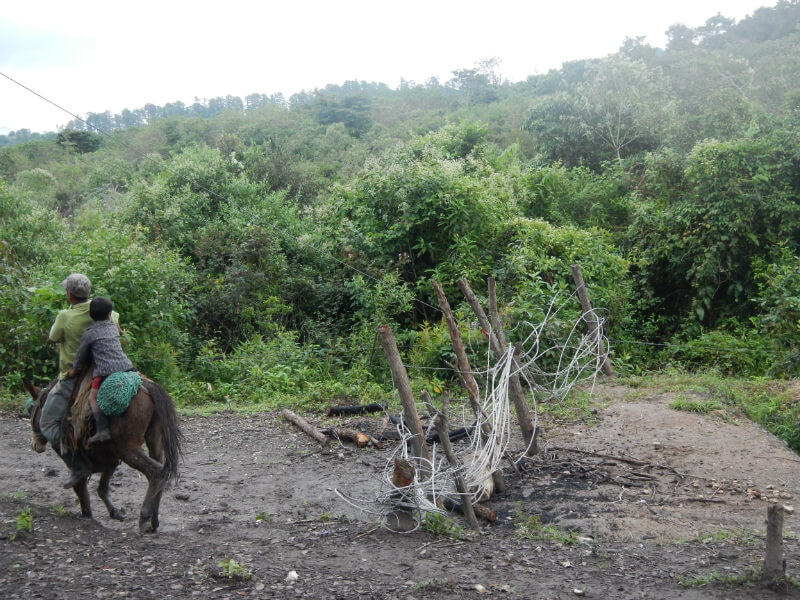 All photos: Rosie Wong
Support our journalism. Become a Patron!

Today, a Lenca community is occupying the entrance to the proposed Agua Zarca dam project in Rio Blanco, Honduras.

The humble occupation started twelve months ago, on April 1, 2013, to be precise. At the time, the Honduran contractor Desarrollos Energéticos S.A. (DESA), and the Chinese state-owned dam builder SINOHYDRO started destroying the community’s crops to make way for the controversial project.

You may have heard that this community, during the course of the blockade, lost at least one person when he was killed by the army, in July 2013. They also received at least one massacre threat from police, in November 2013. And all the while, they have faced constant harassment at police and military checkpoints throughout.

At the blockade, there are a few sticks, a lot of wires, loads of memories and even more stories yet to be unfolded. Back in January 2014, in a small shelter at the outdoor community kitchen under pouring rain, as a giant pot of sweet atol was boiled and shared around–with many people going for seconds–we caught up with Rosa, Miguel and Ana (*names changed for security reasons) to hear some of their stories, to get an idea of what it is like to continue in resistance where the repression is so severe. I had followed their news from the other side of the world, and was amazed and humbled to be there. 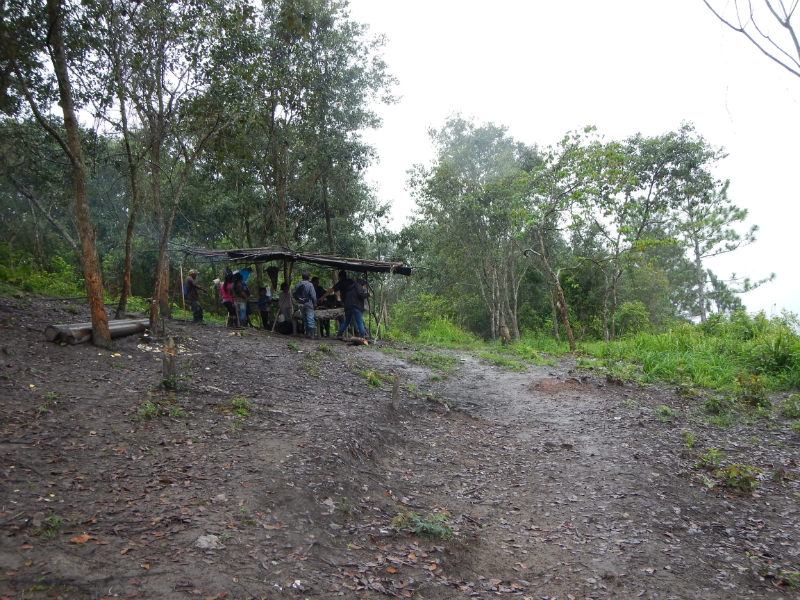 As we took the last sips of atol in colourful plastic cups that we placed on a bench in the rain to wash, Rosa took us to the blockade.

“We first knew about the Agua Zarca dam project in 2005, when they flew in by helicopters and dropped markers. From day one we were always against it, but the engineer Castillo and his representatives kept insisting and making offers. We began to take direct action when we realized they treat us like we are not human beings…

This happened in March 2013, as the company was preparing to build a water barrier structure to dam the Gualcarque River.

“So it was a moment that we had to step up and stop them,” Rosa continued.

Being very human, having lives consciously connected to nature, Rosa, and many others, have been determined to stop the dam ever since.

The proposal for a blockade came out of a community assembly, and from that moment the community was committed to stopping the people and machines of the Agua Zarca project from entering. They built and maintained it with big sticks, masses of wire and a flux of bodies and spirits, at a site entry point called El Roble (the oak tree), where there stands a beautiful strong oak. Rosa was there from the first day of the blockade – from 5 a.m. on April 1, 2013.

Ana chimed in. “At the beginning, people woke up with the sun; people were there day and night, and we cooked there and everything.” This rhythm was shaken and stopped on July 15, 2013, she said, the day the army killed Tomás Garcia. “We stopped – not the blockade, the blockade is always there – but sleeping and waking up there, that stopped there.”

The day Tomás was killed

“We were going to the site, simply to talk, to tell them to leave, because they had no reason to be there,” Rosa said. “They didn’t wait for words or anything from us; instead they went straight for it, they grabbed their weapons, and yelled ‘shoot’. They shot at Tomás García’s body, and killed him. They wounded his son as well, who was taken in a grave state to the hospital. They didn’t wait for anyone to speak, not any of us, not any of them. Instead, as we were arriving, they sprayed us with bullets.”

Ana said she stayed at the blockade cooking beans when most others went to the construction site. 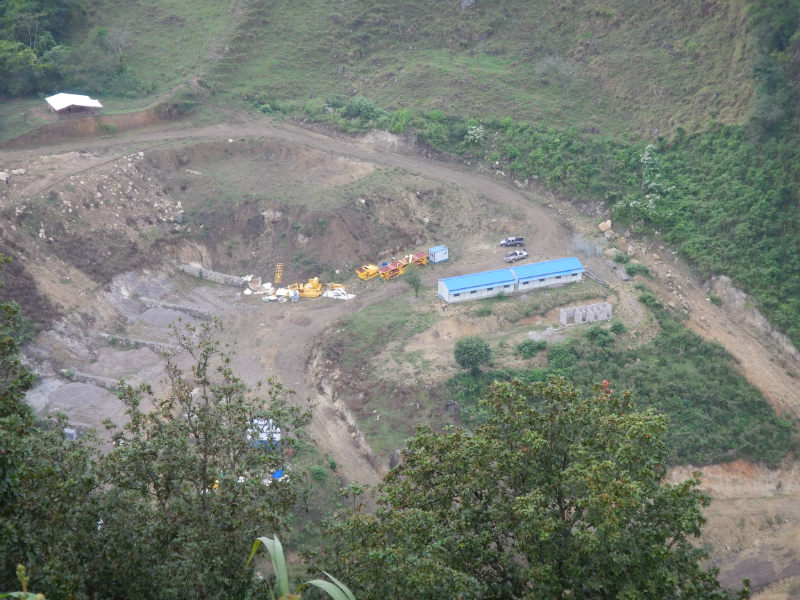 “They never fired shots before. When I heard the gunshot, I said to James, ‘Did you hear that too? A gunshot.’

How does one distinguish the sound of a gunshot from firecrackers or something else? I wondered. And from a distance, without information, how to react? Horror? Denial? When one doesn’t know.

“It was later that some folks came back and this other guy I didn’t know came and told me, ‘They killed Tomás,’” Ana went on. “I asked him which Tomás, if it were the Tomás from COPINH (Consejo de Organizaciones Populares y Indígenas de Honduras) and he said, ‘No, no, another Tomás, it’s Tomás García.’ When he told me this and I went over to see, Tomás was dead already.”

Rosa was asked about Tomás’ son. “Thank God that the son had recovered,” she sighed, “but a little bit, he always has to go for tests or something, because, as one knows, when someone has been shot by bullet, the bullet’s poison always remains bathing the person’s body.”

Again I wondered, do we all know that? Or does this knowledge come with the realities we are confronted with?

Police came to Ana’s modest family home on a day when she was not there. Her little son cried. She knows deep down they beat him. Ana said the only person he told was the prosecutor. “I will tell him, mi mamá, only him.”

Pain is personal and political, and this March 5th, 2014, María Santos, sister of Tomás García and aunt of the gunshot-wounded son, had seven men attack her with machetes slashing at her head and chest. They were killing her. Her husband Roque begged them to stop and they attacked and wounded him, while her son, seeing his mother attacked and bleeding, ran to her side. The machete holders slashed at him too, slicing his ear and face.

It is hard, with a visit or two, to get a real sense from those have lived this, or who live in a community where these attacks happen, time and again. I first heard María speak on a video shot by the river shortly after her brother Tomás was killed, saying she will defend the river with her life too, that if they killed her, it would be a matter of pride for her to give her life to this struggle.

In the eyes, words and actions of the people is an undeniable love for the Gualcarque River and the land.

“We always identify as indigenous, they try to deny it, but that is what we are,” Rosa confirmed. “With the land and the rivers, we here believe, and we have always believed, that the land has owners or spirits, who are the ones accompanying us and helping us, and they are going to keep helping us. The river has some spirits here that are called la niña, and this spirit helps us a lot and helps the river a lot too…”

Miguel showed us that as an indigenous people, they have rights to the territory, just as they also have a disposition to die defending it all, because “rivers are to protect, not to sell, because if we sell them, we are selling life. Forests are what give us life. Water is life for us. But, if we sell the rivers and the nature, we are buying death.”

Deep wounds, but with even deeper conviction, they keep going

A question keeps repeating in my head, “But how? How to have so much happen and still keep fighting?”

There can be magic within people and interactions between them and the environment, too. A lot of things may have helped. Meeting Guatemalans who face the same problems, helping one another “stay motivated to defend what is ours and speak the truth,” as Miguel said. Participating in broader skill-sharing activities and workshops, Ana told me that “today many of us feel more confident to give voice to the struggle.” Visits from human rights defenders from other parts of Honduras and other parts of the world add layers, however thin, of safety and encouragement.

The Chinese company Sinohydro has left. DESA is still there, but Rosa and Ana observed that the construction workers aren’t carrying out work there anymore. Ana said, “We just need the dam to leave for once and for all. We need to grow our food here, to eat and be happy. This is our land; if the dam gets its way we won’t have anything to eat!” 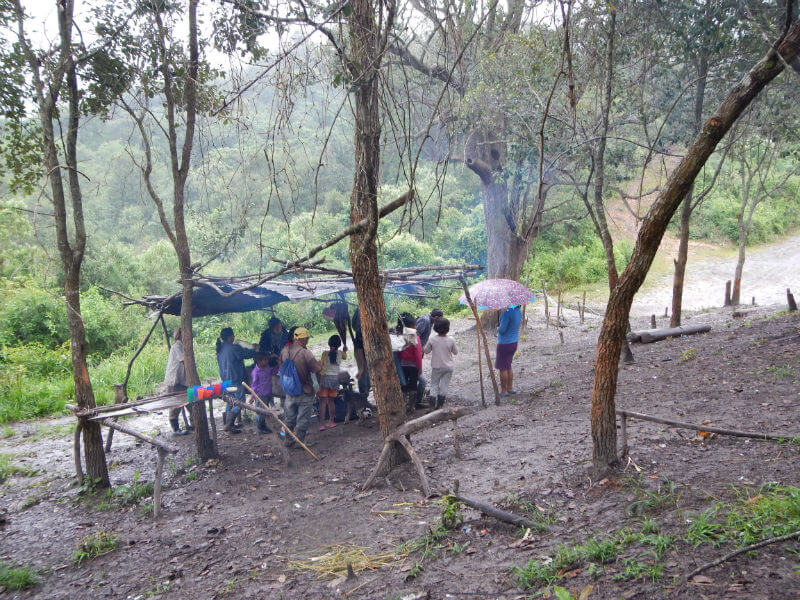