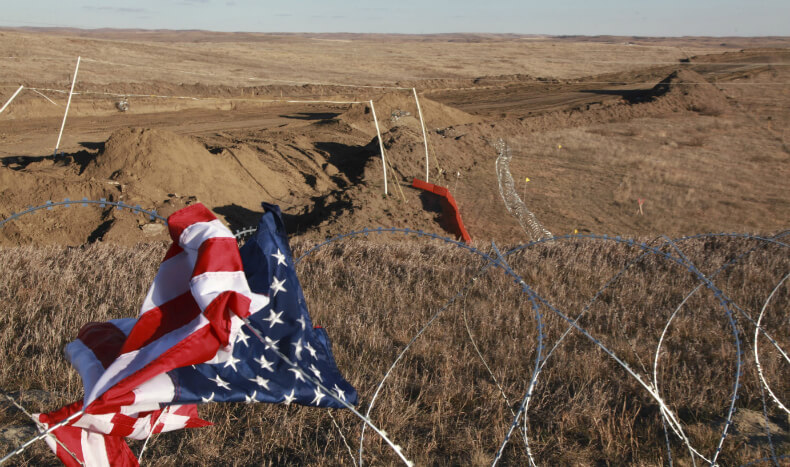 Countdown to the Next Wounded Knee?
A view close to the police blockade outside the Oceti Sakowin camp, Nov 6 2016. Photo: Max Collins
Support our journalism. Become a Patron!

The famous 1973 occupation of Wounded Knee – which triggered the infamous and violent standoff with the federal government – was the culmination of a growing dissatisfaction among members of The American Indian Movement (AIM) towards corrupt Oglala officials who were perpetually selling out their community’s interests.

AIM, however, wasn’t born in a political vacuum. However, it was federal policy that pushed many Native Americans off their reservations and into urban areas, energizing the long simmering ‘pan-Indian’ movement and inspiring the emergence of AIM. The rise of AIM, and the over-arching sense of unity among tribes across the United States, was an unintended consequence of political attempts to assimilate Native Americans and finalize the federal government’s long game of cultural genocide.

The phrase ‘unintended consequence’ is a favorite of political conservatives. When it is used in a pre-emptive manner (rather than a retrospective one) it often serves as a caveat to government policy which sounds good in theory but could predictably achieve ends counter to the proposed intent. Conservatives regularly speak about the unintended consequences of gun control, the unintended consequences of a welfare state, and the like. And now Markwayne Mullin, one of only two Native American members of Congress – both of whom are Republican – has appropriated this jargon from the establishment lexicon to offer an awkward preemptive defense of his own views on the privatization of Native lands.

In a widely circulated Reuter’s Article, Mullin was quoted as saying:

“We should take tribal land away from public treatment. As long as we can do it without unintended consequences, I think we will have broad support around Indian country.”

Mullin, notably failing to address what sort of unintended consequences should be of concern here, issued a press release on December 5th, and even took to Facebook to defend his controversial stance.

“If an energy company is developing natural resources anywhere in the United States, and they get a tribal partner, they could fall under this provision. This could incentivize energy companies to partner with tribes simply for the benefit of skirting NEPA and profiting from restricted judicial review.”

Though it passed in 2015, with the Obama administration threatening a veto, the bill was also criticized in a statement by the National Parks Conservation Association. The NPCA warned:

“The bill would insulate energy projects on tribal lands from judicial review by restricting the amount of time to file claims and by making the pursuit of a legal challenge far too expensive for the average citizen… [as well as] eliminate health and environmental protections established by the Department of the Interior in rules regarding hydraulic fracturing. Those living on and near tribal lands would be potentially subjected to heightened risk of spills, underground contamination from toxic chemicals, weakened air quality, [and] reduced well construction standards…”

Earlier this month on November 16, 2016, current Secretary of the Interior, Sally Jewell, announced the ‘Methane and Waste Prevention Rule’. Updating 30 years of antiquated regulations, the rule is geared to reduce pollution caused from byproducts of oil and gas operations on public and Native American lands. Jewell stated:

“This rule to prevent waste of our nation’s natural gas supplies is good government, plain and simple. We are proving that we can cut harmful methane emissions that contribute to climate change, while putting in place standards that make good economic sense for the nation. Not only will we save more natural gas to power our nation, but we will modernize decades-old standards to keep pace with industry and to ensure a fair return to the American taxpayers for use of a valuable resource that belongs to all of us.”

In an ironic twist,  it turns out that a prominent contender to replace Jewell as Secretary of Interior under the Trump administration is none other than a close ally to Markwayne Mullin, Oklahoma Governor Mary Fallin.

The Oklahoma Chapter of the Sierra Club has deemed Fallin as “problematic”.  Sierra Club Director Johnson Bridgwater stated, “She has basically been an absentee governor on all important environmental issues in our state during her term”. Bridgwater further criticized her for a sluggish response to extractivism-induced earthquakes, an overall practice of defunding environmental initiatives, and her unabashed prioritization of fossil fuel developments. Fallin is characterized overall as very ‘pro-oil’.

One incident which helped garner Fallin this industry friendly reputation was her sponsorship of a bill in 2009 that, in her own words, was intended “to expedite the exploration and development of oil and gas from Federal lands.” Staying in character, Fallin signed a bill in 2015 to prevent local and community level bans on fracking and other extractive activities.

For his part, Mullin also has a questionable voting record as Congressman, which notably includes voting against the Violence Against Women Act (VAWA), passed in 2015.  VAWA famously – and finally – gave Native American tribes jurisdiction to investigate and prosecute non-Native men who victimized Native women on reservations.

Mullin defended his ‘no’ vote on VAMA by claiming objections to the inclusion of protections for lesbian, gay, and transgender individuals. In a similar show of bigotry, he voted – not once, but twice – against House Amendment 1128 which prohibited the use of funds for government contractors who discriminated against LGBTQ employees.

Pruitt has lead the fight against Obama’s paradigm shifting climate rule for power plants, as well as several other key environmental protection statutes. Unsurprisingly at this point, he also shares Mullin’s discriminatory attitude towards transgender individuals, which he demonstrated by taking part in an effort to sue the Obama administration over the so-called transgender bathroom bill.

Cherokee Congressman Markwayne Mullin seems to be extremely well situated among the pro-oil, anti-LGBTQ, political elite of Oklahoma. And it seems he is now leveraging his Cherokee identity to powerfully position himself within the incoming Trump administration – currently co-chairing Trump’s Native American Affairs Coalition.

Will Congressman Mullin’s behavior beget the same sort of volatile schism between Native political leadership and Native cultural leadership that led to the infamous 1973 standoff at Wounded Knee?

“Our spiritual leaders are opposed to the privatization of our lands, which means the commoditization of the nature, water, air we hold sacred. Privatization has been the goal since colonization – to strip Native Nations of their sovereignty.”