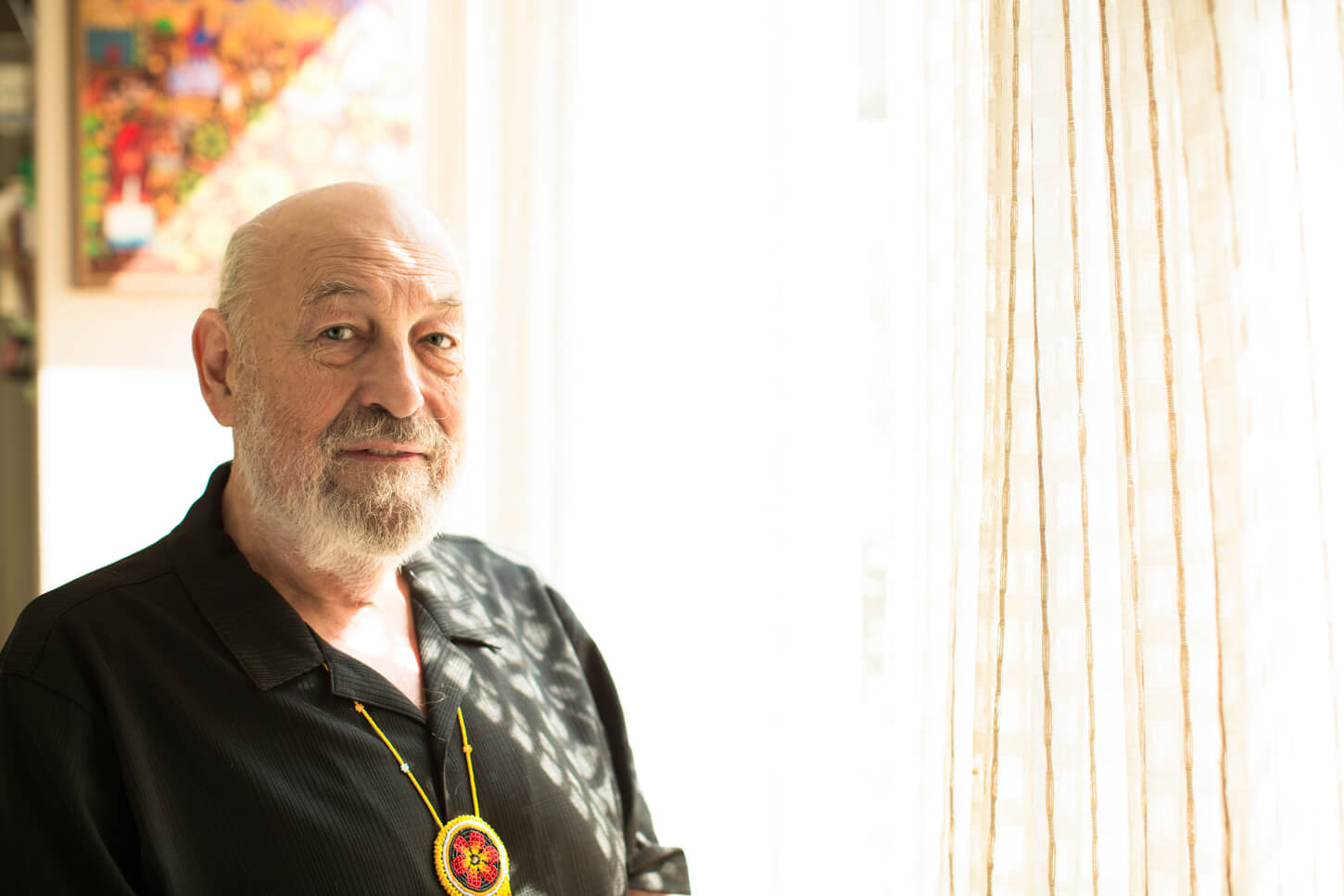 The Catalan Nation and the Iraqi Kurdish Nation have had enough and they want to get out of Spain and Iraq respectively. As it is true for Catalonia and Kurdistan, all of the world’s Fourth World nations’ economic, natural and cultural wealth held flows to enrich controlling states, avaricious corporations, trans-state religions and organized crime at the expense of Indigenous Peoples. Very little returns to the benefit of indigenous nations. Indigenous nations’ wealth feeds the economies of states through the extraction of petroleum, water, minerals, forests/jungles, and the creative knowledge of each nation’s peoples.

The United States of America led a United Nations effort in 1952 to force indigenous nations inside existing states to remain under state control with no political alternatives or prospects for self-determination. In other words, the vast majority of the world’s Fourth World nations are forced under state power to endure the control over their existence without having ever freely given their prior and informed consent.

Many of the world’s nations may be willing to remain with the political jurisdiction of a state if they are permitted to freely determine their social, economic, political and cultural existence without state, corporate or criminal interference. But, interference in the daily life of Fourth World nations persists and in many parts of the world this interference and yes violence against Indigenous Peoples accelerates. It is this interference that prompts Fourth World nations to seek “independence from the control of a state.”

Catalonia and Kurdistan (two distinctly indigenous nations) have been in the news in the past several weeks—each threatening to separate from the state that claims them: Spain and Iraq respectively. Since the news broke about the Kurdish Independence Referendum (25 September) and Catalonia’s Referendum for Independence (1 October) tension between each nation and the state that claims them has grown to the point where civil war has been frequently suggested. Nations challenging the legitimacy of each state’s dominion over the nation is what we are witnessing. And both indigenous governments made fatal political errors in their effort to gain a peaceful transition to “statehood.” 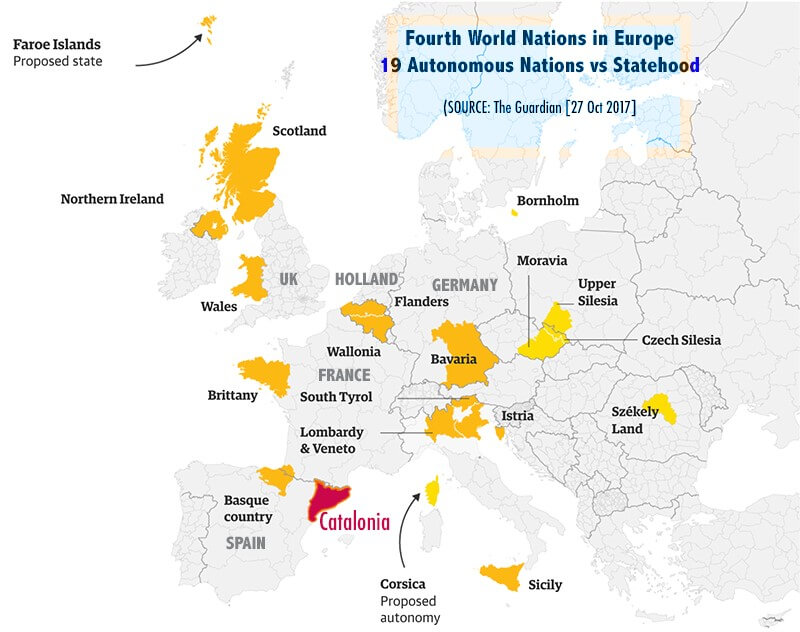 We are also witnessing the willingness of Spain and Iraq to employ police and military force to cancel efforts by Catalan leaders and Kurdish leaders to enter into dialogue with the control state governments by use of “force by plebiscite.” Yes, these nations’ leaders decided a show of “democratic votes” would persuade the Spanish government and the Iraqi government to sit down at a negotiating table. They were wrong.

Catalan leader Carles Puigdemont chose to proceed with a vote for independence from Spain even though a sizable portion of the Catalan population preferred not to. Catalonia had not organized any political support internationally and was therefore quite alone in its efforts. While everything points to Catalonia’s legitimate claims on a new political status (it was an autonomous territory insider Spain), independent statehood is not to be. Look at the map of Europe with the various other indigenous nations that seek autonomy and could seek independent statehood and you can see why state governments widely oppose Catalan independence. Spain’s Premier Mariano Rajoy declared the Catalan government null and void took control over Catalonia and announced that new elections for the entire Catalan government would be scheduled for 21 December 2017.

The Kurds of Iraq—headed by the Kurdish Regional Government (KRG)—organized a referendum on Kurdish independence that garnered 90% of those voting (Only 43% of the Kurdish population voted). In response to the vote and the KRG’s unwillingness to stop the referendum vote on 25 September Iraq, Iran, Syria, Turkey, the United States, and Germany were among the states calling for the vote to stop. Meanwhile, the Kurdish Peshmerga forces were sent out to occupy valuable oil fields outside of recognized Kurdish territory. These forces also moved into Ezidikhan to occupy Yezidi lands. All of these maneuvers were intended to expand Kurdish territory by a third. Iraq mobilized its military to directly confront the Kurdish military to force them back into Kurdish territory and away from the contested territories of Kirkuk and the Sinjar (Ezidikhan), and then Iraqi forces took control of significant oil production fields in Kirkuk worth $8 – $10 billion a year—essentially preventing Kurdish independence by cutting off its ability to obtain those funds from oil sales. 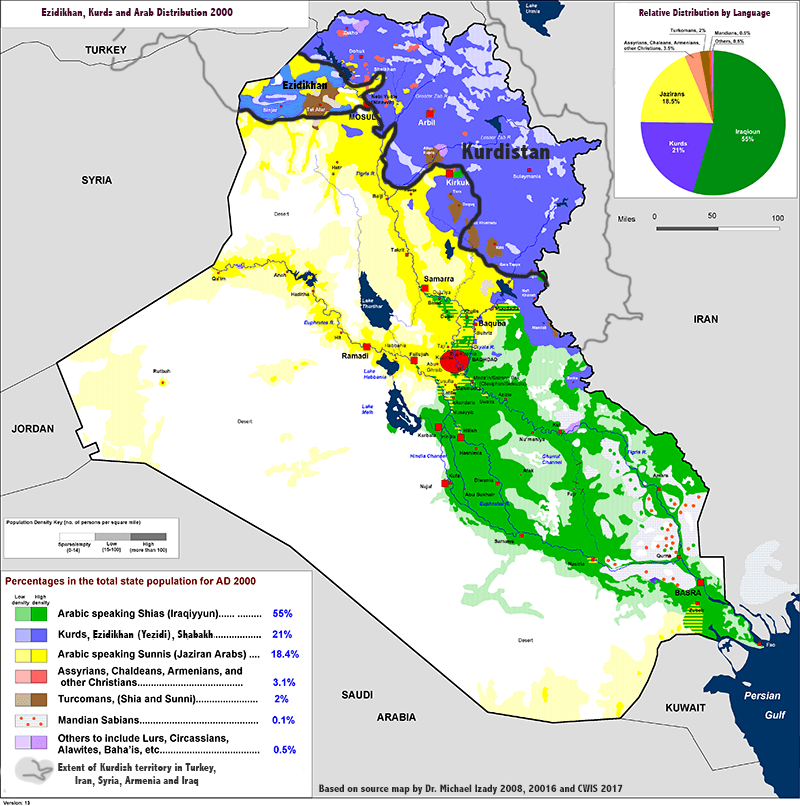 As you can see on the map, below the original Kurdish territories inside Iraq are smaller than the “blue” contested territories. But, it is notable that Kurdish peoples extend well into Turkey, Syria, Armenia and Iran (the gray lines into each of these countries is the extent of Kurdish populations). The area inside Iraq is the territory about which the independence referendum was staged. Clearly opposition to Kurdish independence from Turkey, Iran, Armenia and Syria as well as Iraq arises from the fear of breaking up sizable pieces of these existing states to accommodate the Kurds.

I suggest that the current standoff between the nations and states arises from the perpetual insecurity of the state as a legitimate social order that includes diverse peoples. The nations of Catalonia and Kurdistan claim the right to exercise self-determination by forming their own state and the state claims that such efforts to separate from the state are illegal and injurious to the state’s existence, thus, warranting firm preventive measures.

Statehood and Nationhood are really two different kinds of social organization—the state reliant on social definitions constructed as a relatively recent formation of the state and the nation reliant on cultural definitions evolved over expanses of time defining the relationship between a people, the land and the cosmos. The state is essentially an artificial construct created to: establish a centralized authority exercising absolute authority, that commands a monopoly over the use of force, and enforces universal laws within a territory that has fixed boundaries.

The nation exists as evolved relationships between human beings where authority is distributed and non-absolute, with a common use of the land and understanding of the cosmos. Indeed these forms of human organization are antithetical to each other and consequently some of the world’s nations no longer consider inclusion within the boundaries of an existing state as tenable or secure. If the nation does not enjoy social, economic, political and cultural security it is bound to seek separation from a state if that state does not actively seek to provide security according to the nation’s measures.

States are frequently unstable due to their centralized control and inability to extend the full measure of social, economic, political, cultural security to the people(s) living within its claimed domain. Many of the newly formed states in the world today are actually products of nations seeking to claim control and authority over their society(s). These new states formed or controlled by indigenous nations (Yemen, South Sudan, Somalia, Syria, Chad, Afghanistan, Iraq, Nigeria, Burma, Pakistan, Eritrea, Niger, Libya, Nepal, Timor-Leste among them) are among the world’s failing states. Governments that are weak or ineffective with little practical control over much of its territory; unable to provide public services; plagued by widespread corruption and criminality; refugees and involuntary movement of populations; and sharp economic decline characterize failing states. In other words, indigenous nations do not make very good states.

To avoid these errors in the future, indigenous nations must avoid the trap of seeking to become a “state” when their natural powers and form a society that is suitable to governing a nation. Nations must seek to establish the political status of nations confederated in relation to state—exercising distinct powers suitable for their needs and wants. Becoming a “state” means acting like a state to dominate other peoples, confiscate the wealth of other peoples and to engage in state sponsored violence against neighbors and peoples within. Nations cannot survive acting like states. Nations have a well-practiced approach to existing as societies in culturally-defined arrangements. They needn’t seek to be “greater or more powerful” than their neighbors, they only need to preserve their distinct cultural identity.

Dr. Rÿser is the Chairman of the Center for World Indigenous Studies. He served as Senior Advisor to the President George Manuel of the World Council of Indigenous Peoples, Advisor and Speechwriter to Quinault President Joe DeLaCruz, a former Acting Executive Director of the National Congress of American Indians, and a former staff member of the American Indian Policy Review Commission. He holds a doctorate in international relations, teaches Fourth World Geopolitics through the CWIS Certificate Program (www.cwis.org). He is the author of Indigenous Nations and Modern States published by Routledge in 2012; and was joined by Dina-Gilio Whitaker and Heidi Bruce in the publication of Fourth World Theory and Methods of Inquiry in Handbook of Indigenous Knowledge and Research Methods in Developing Countries by IGI, International in 2016.