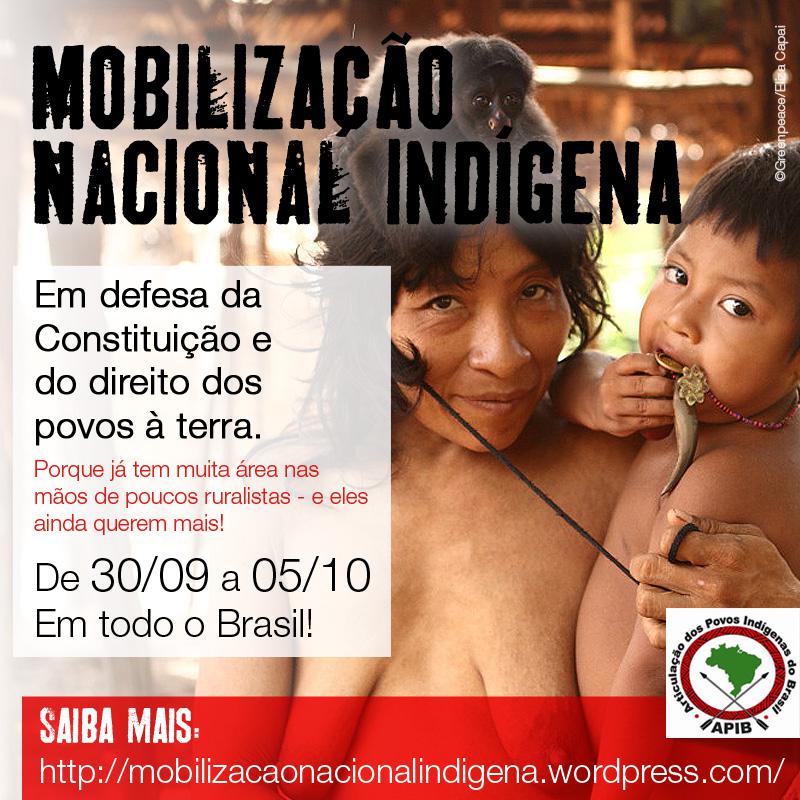 Planned for the week between Sept. 30 and Oct. 5 2013, the National Indigenous Mobilization will promote events at various locations around the country. There are confirmed events in at least four capitals (Brasilia, São Paulo, Belém and Rio Branco), and in cities in the interior (see schedule below).

The mobilization was convened by the Articulation of Indigenous Peoples of Brazil (APIB) to defend the Constitution, the rights of indigenous and traditional peoples and the environment (read the convocation). On October 5, the Brazilian Constitution will be 25 years old.

The objective is to protest against the widespread attack on territorial rights of these populations [by] the government, the ruralist (agribusiness) caucus in Congress and the lobby for the large mining and energy companies. Even after the protests of April this year, when hundreds of indigenous people occupied the House floor and the front esplanade of the Presidential Palace, [there have been continued attempts to destroy] Article 231 of the Constitution, which assures the rights of the indigenous peoples over their lands.

Hundreds of projects proceed through Congress to restrict the rights of indigenous populations, quilombolas and other traditional populations over their lands, in addition to attempting to prevent the creation of conservation units. Among these are the Proposed Constitutional Amendments (PECs) 215/2000 and 38/1999, the Supplementary Law Bill (PLP) 227/2012 and the bill for Public Law (PL) 1.610/1996.

The government of Dilma Rousseff has the worst performance in the demarcation of Indigenous Lands (TIs- Terras Indigenas) since the re-democratization. Even so, she intends to make it even more difficult to create new areas with changes in demarcation processes. The ministerial order Portaria 303 of the Attorney-General (AGU) also drastically restricts indigenous territorial rights. At the same time, the federal government continues financing, with billions of reals, the agricultural model based on the latifundio (large-scale estate holdings), which concentrates income and land, employs few and abuses agrotoxins, drives off the land the rural workers, peasants, indigenous and traditional populations.

The National Indigenous Mobilization is supported by indigenous and indigenist (indigenous rights advocacy) organizations, such as the Socio-Environmental Institute (ISA), the Indigenous Missionary Council (CIMI) and the Center for Indigenous Work (CTI), but also by other social movements and civil society organizations, like Greenpeace, the National Coordination of Quilombolas Communities (Conaq) and Free Pass Movement [public transport] (MPL).

Wednesday, Oct. 2 – Meeting of the Indigenous Peoples of Roraima embraces Roraima and the celebration of the 25th anniversary of the Constitution, Sabiá community, municipality of Pacaraima

Thursday, Oct. 3 at 8:00 am – March of Resistance of the Tapeba and other indigenous peoples of Ceará, gathering in the main plaza of Caucaia, metropolitan region of Fortaleza (CE)

Schedule of events in Brasilia (some events to be confirmed)