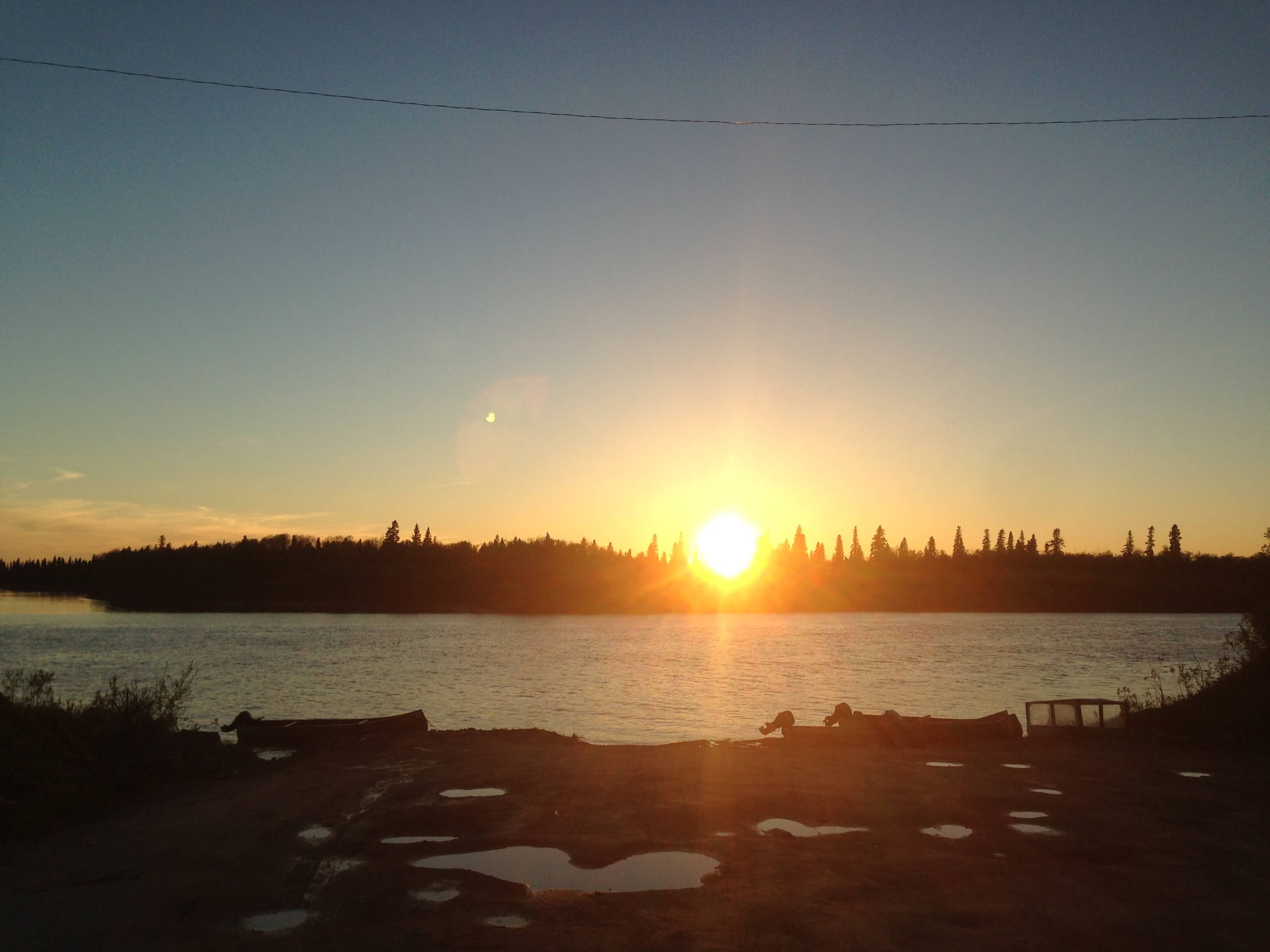 The Moose Cree First Nation, located on Moose Factory Island at the southern end of James Bay, is engaged in a series of community-based language preservation initiatives in support of its unique dialect of Cree. The First Nation’s Language and Culture department published the first Moose Cree dictionary in 2014 and a second edition in 2015, which will be followed by third, English-to-Cree edition next year. Geraldine Govender, Director of Language and Cultural Programs for the First Nation, coordinated the dictionary with Cree linguist Kevin Brousseau and a group of elders from the community. She is also currently working on a Moose Cree grammar project with linguist Jimena Terraza and the elders, as well as an online “talking dictionary”. With just 150 estimated fluent speakers in Moose Factory and a registered First Nation population of 3899, Moose Cree is in urgent need of preservation. Moose Factory’s remote location in the northern reaches of Ontario, accessible only by rail and water taxi for much of the year, is one of the factors endangering the language.

The challenges Govender overcame to acquire funding for the dictionary and grammar projects suggest a need for careful implementation of the Truth and Reconciliation Commission’s calls to action related to language revitalization.

On May 30, 2016, the Ontario government published a report in response to the TRC’s final report pledging to invest over $250 million over the next three years in “programs and actions focused on reconciliation.” Up to $30 million of this budget is dedicated to indigenous cultural revitalization, including an indigenous languages symposium “with indigenous partners and stakeholders to review current programs, determine gaps and identify community priorities and the supports need to support indigenous languages.”

The government will need to implement this support in close consultation with the First Nations to ensure funds are going where they are needed most. As Govender found, funding for community-based language programming is currently hard to come by, and there are logistical barriers to access even when funding does exist.

“There’s no money out there, really, for indigenous language programs,” Govender said. “There’s money through the Canadian heritage, which is federal, and through the Aboriginal Language Initiative, but there isn’t anything there really for operating costs, for core costs, to hire someone and have someone on staff. So I would think very few First Nations would have a language and cultural department.”

Govender cited the Canadian government’s long history of policies aiming to eradicate indigenous languages as one of the primary obstacles in making funding available for language revitalization. She explained that this history has made the transition to supporting language programming a difficult one, and has created problems not only with the quantity of funds available for programs, but with the distribution of funds to the organizations that need them. Govender found that language funding often went to provinces, where it was difficult for her to access; when she applied, the $5000 provincial maximum for Moose Factory’s region had already been given out.

Instead, Govender has had to turn to other, less obvious sources. In 2006, Moose Cree chief Patricia Faries-Akiwenzie allocated revenue from one of the nation’s casinos to fund a language and cultural department, with the understanding that Govender would be responsible for obtaining funds to sustain the programs going forward. Since then, she has succeeded in funding the dictionary through revenue sharing agreements between the Moose Cree First Nation and the Detour Gold company and the Amisk-oo-skow agreement with Ontario Power Generation. 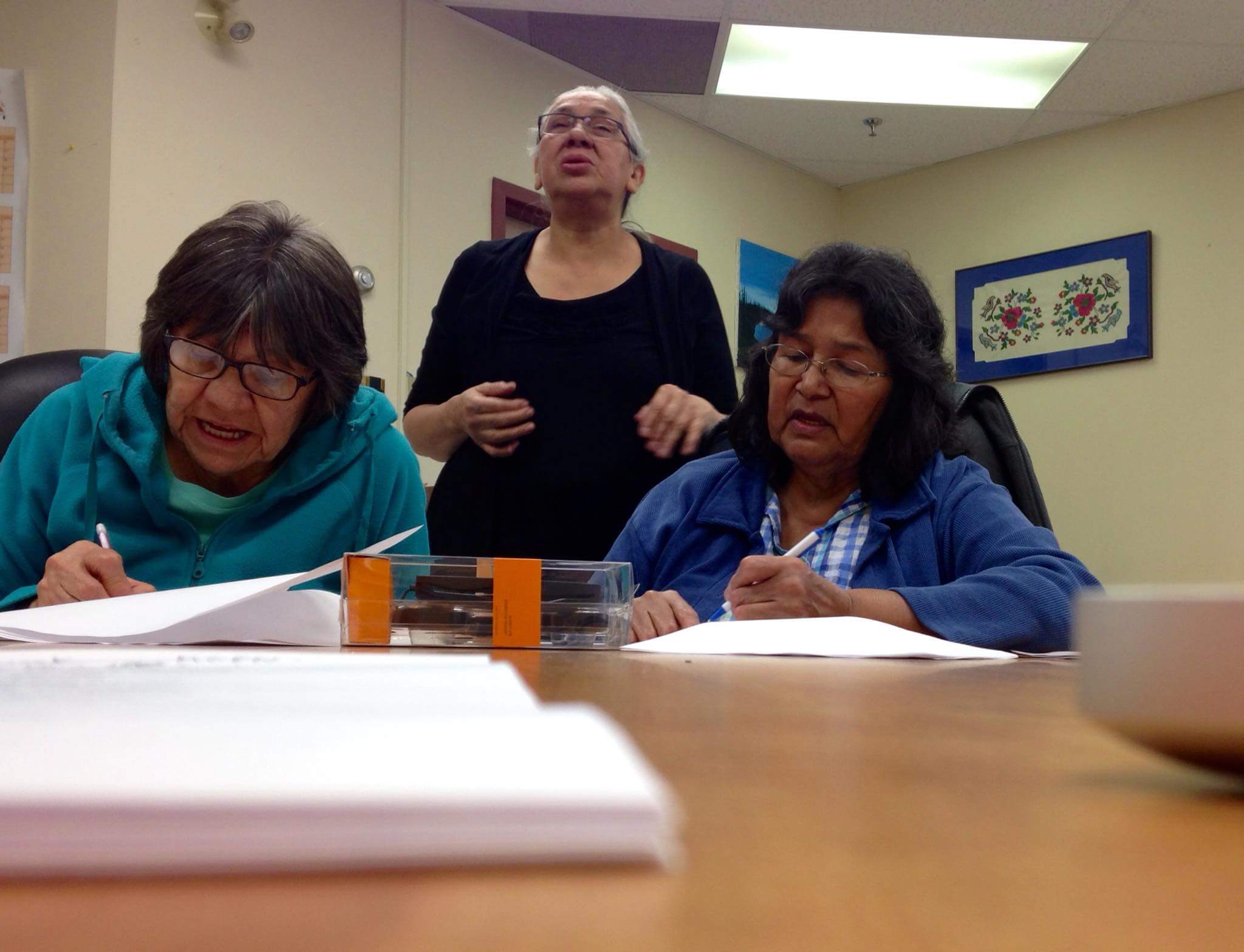 Kevin Brousseau, the lead linguist working on the Moose Cree dictionary, has been working with community elders both in person and over the phone to assemble the words for the forthcoming English-Cree edition. He has also drawn from earlier written records of Moose Cree.

Govender and Brousseau are working with a group of community elders on an online talking dictionary facilitated through the Living Tongues Institute for Endangered Languages to help learners grasp the often-complex pronunciation of Moose Cree words. The project is a work in progress, with 2499 entries in both Cree syllabics and Roman orthography as of June, accompanied by 1307 audio files. Govender works with three elders to record the audio files for the lexicon in order to ensure accurate pronunciation. Since each elder is proficient in either pronunciation, syllabics, or orthography, but not all three – finding someone who can do it all is virtually impossible – the logistical difficulties of coordinating the three has been one of the major challenges in finishing the recordings.

Moose Cree bears a closer resemblance to the historical Cree language than many other dialects spoken on the east coast of James Bay, making it an important dialect to study in understanding the history of the Cree language. However, despite its linguistic significance, the dialect’s isolation has placed Moose Cree in danger of extinction.

“Because it’s here, we get less and less speakers, and it’s more and more critical to try and save it,” said Govender.

The Moose Cree grammar Govender is working on with linguist Jimena Terraza is a response to the urgent need for classroom materials to teach Cree as a second language in Moose Factory and Moosonee, a town across the Moose River from Moose Factory. The grammar presents Cree sentences in the context of traditional Cree stories, many of which were written by native speakers in the late 1800s and recently translated to Roman orthography.

Although there are materials being produced for other Cree dialects, Moose Cree’s small speakership has put it at a disadvantage in terms of the availability of teaching materials. Neither of the elementary school teachers Terraza visited during her research had enough material available to them. Consequently, the teachers had to create their own activities and exercises, sometimes using photocopies of textbooks from other dialects, sometimes adapting materials for the classroom from their own second language teaching training at Lakehead University.

Another challenge associated with teaching Cree is its complexity as a polysynthetic language, meaning that one word is used to express multiple concepts. Verbs in Cree often include several ideas that would be expressed with nouns in other languages. For instance, a single word exists in Cree to describe the action of walking down a curving path along a lakeshore with sand dunes. Govender also illustrated Cree’s verb-based structure using an example that rings almost painfully true in Moose Factory, explaining how the concept “plenty of” becomes a verb in the phrase “It’s mosquitoing everywhere!”

Govender and Terraza are both adamant that the grammar helps teach Moose Cree in a way that reflects its polysynthetic nature. Because Moose Cree is now being taught primarily by translating nouns directly from English, rather than by presenting the complex verb-based construction of the language, students aren’t equipped with the tools to put concepts together.

“It doesn’t do them any good. All they can say is niska [goose]; they can’t describe the flying or how they fly. They don’t have the words,” said Govender.

This priority was the motive behind the grammar’s approach to Cree through traditional stories. Terraza’s aim was to make the grammar as accessible as possible to non-Cree speakers and those without training in linguistics.

“It should be something that users can take advantage of. For me, this is a very important project because I’m finally doing something that’s near to the needs of the community. It’s not only for the advancement of scientific knowledge; it’s for real people who have real needs,” said Terraza.

Terraza identified a delicate balance between using English as a familiar reference point when teaching Cree and the danger of erasing the complexity of the language by doing so. With a keen awareness of the power relation between English and endangered indigenous languages, she insists on showing the incredible complexity and richness of Cree and recognizing its polysynthetic aspects in the grammar. She compares the role of English in teaching Cree to a “crutch” that learners can lean on, especially when learning such unfamiliar concepts as the Cree obviative, or “fourth person”, but is careful to avoid transposing English patterns onto Cree for the sake of convenience and familiarity. 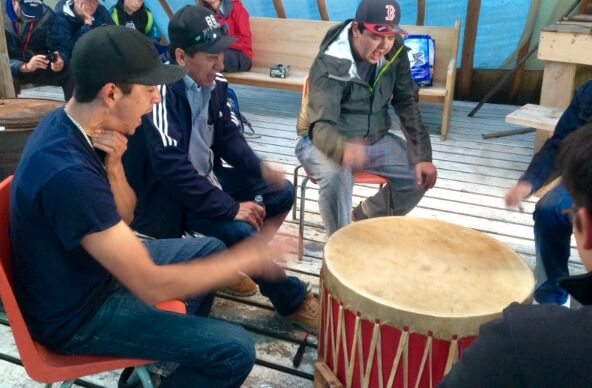 The High Ridge Singers, a group of Moose Cree youth who write and perform songs in their First Nation’s language. Photo by Lauren Wildgoose.

Govender has a close personal connection to the important role of the Moose Cree language in preserving the community’s culture, especially for the youth in Moose Factory. Her son, Brennan Govender, is a member of the High Ridge Singers, a youth drum group formed in Moose Factory who perform songs in Cree. Although the group has now grown to include both young men and women scattered throughout northern Ontario, it started in 2008 as a group of four young men from the island who wanted to learn traditional singing and drumming.

“It started with me, Brennan [Govender], Caleb [Turner], and another young guy named Brendan Cheena – we were the first ones talking about how with the youth in the community, there are lots of problems, like personal issues, family issues, lots of drug and alcohol abuse,” said Gerry McComb, one of the original members. “Brennan said, ‘what I want to do is bring culture to people… I don’t want people to wait for it to come to them.”

Dean Mianscum, a Moose Factory community member with experience singing and drumming,taught the group and guided them through their first powwow. After a month of practicing and accumulating more members, the group traveled to Fort Albany to compete in their first powwow without Mianscum’s guidance. The group now competes in powwows across Canada, and has won several competitions. All the members are dedicated to living a clean lifestyle free of drugs and alcohol as part of their commitment to making positive changes through their drumming.

Brennan Govender writes most of the group’s original Cree language songs. Although he isn’t fluent in the language, his mother helps him piece together the words into songs that reflect traditional concepts and values.

Geraldine Govender described one song that uses Cree words to describe the dancers’ grand entrance into a circle, explaining that circles have particular significance in many indigenous cultures.

“They may not be able to understand it all, but I explain those words to Brennan,” said Govender. “[One song has] a description of all these people who come dancing in, and that’s just in one word.”

Singing and drumming together has built a feeling of brotherhood among the singers. McComb also explained how drumming encouraged him to explore traditional spirituality, which he had first been introduced to through learning ceremony songs a year or so before the group’s conception.

“There’s a spiritual side of drumming,” McComb said. “The powwow is mostly a social thing, but… we bring that positive energy to powwows.”

When asked about the future of young people learning Moose Cree, Govender seemed hopeful. “I think there is a real interest. I’m really excited about it. I think young people are really wanting to learn.”

Correction: An earlier version of this story misspelled the name of High Ridge Singers member Brendan Cheena. We regret the error.