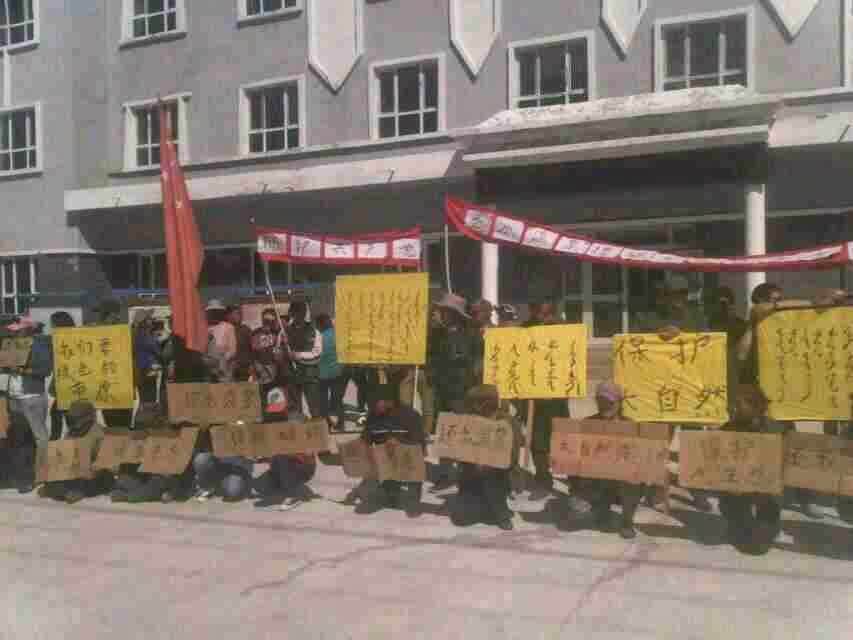 Mongolian herders from Bayangol area took to the streets to demand the protection of their grazing land (SMHRIC photo)
Support our journalism. Become a Patron!

New York – Earlier last week, Mongolian herders from Hejing County of Bayangol Prefecture in China’s so-called “Xinjiang Autonomous Region” took to the streets in the county capital, protesting the Chinese authorities’ appropriation of their grazing lands for the purpose of expanding tourism and mining. The local authorities immediately dispatched police to disperse the crowd. Some ten protestors were arrested.

The herders held up banners reading “return our green land”, “return our hot spring”, “return our livelihood”, “who is accountable for the destruction of our natural environment?” “Let our natural environment remain in pristine condition, let our water and rivers be unpolluted, let our sky be blue forever, and let our people live without any suffering!” They demanded the local authorities halt their development projects, in particular tourism and extractive industries in their land.

“The Chinese have no idea how sacred and how valuable water is to the Mongolians,” Mr. Sodoo, a Mongolian from the community, told the Southern Mongolian Human Rights Information Center (SMHRIC) by phone about the recent conflict between the Chinese authorities and the local herders.

“Polluting water source is absolutely not permitted by the Mongolians. However, recently some Chinese tourist companies came to destroy our grazing lands and even built toilets by the upper bank of the Arshaan River to dump their filth directly into our most sacred water source,” Sodoo said angrily in the phone interview.

“We have fought generations to defend our grazing lands against aggressors including the Kuomintang army, the Communist Chinese, and even some Kazaks,” Sodoo touched upon their history of protecting their homeland, “up until 1980s we Mongolians fully armed with live ammunition literally had battles with aggressors to defend our beautiful land.”

Herders from the community also complained that extractive industries including both state-run and private ones are destroying and polluting their natural habitat without any proper treatment.

“Compared to the tourism industries, mining is even more destructive to our land,” a written communication from the affected Mongolian communities in the county states, “our land is opened up and water resources depleted.”

The Hejing County Land Resource Management Bureau website confirmed that indeed this particular rural Mongolian area is extremely rich in iron, magnesium, gold and copper. Perspective iron deposit is about 1 billion tons, magnesium 100 million tons, and copper 300,000 tons in the county, according to the Bureau’s website.

The Bureau also revealed that as of April 27, 2010 at least 48 mining licenses were issued. Of them 13 were issued for iron mining.

“With vast territory and sparse population, our county is rich in mineral resources. There have already been 410 prospecting target zones defined. Among them 27 are iron prospecting targets mainly spread across the remote rural areas of Kongusiin-gol Sum, Bayanbulag and Baruuntai townships,” the Bureau website said.

The Chinese official press “Xinjiang Daily” reported on July 19, 2013 that the first massive iron-zinc-gold multi-metal mine was discovered in “Dumda Iron Mine”, making it one of the four largest gold mines in the region.

As Chinese mining industries expand their operations in these rural Mongolian communities, local herders were forced to give up their grazing lands, livelihood and way of life to accommodate these demands.

According to Chinese state-run official press “CCTV” report entitled “Herders of Hejing County finally moved off their homeland in order to protect grassland” (May 7, 2012), it appeared that the herders were being forcibly moved off their land because of the Chinese government’s development and nature conservation projects.

The report states that “80% of the houses of the herders were demolished” by November 2011, and the “livestock grazing ban”, projects for paving roads and other construction programs were carried out “smoothly” in the remote rural Mongolian community.

Yet, the same report revealed that a herder named Urkheshig refused to move off his ancestral land, and told the Chinese officials that “no, I will not move. We have lived on this land for generations. The blue sky, white cloud, grassland and water ponds here are our lifeline glued to our hearts and souls.”

Another report entitled “Hejing herders left their homes to recover the grassland ecosystem”, dated June 24, 2013, by the “Xinjiang Daily” also stated that relocated herders from Bayanbulag “today almost completed the transition from herders to peasants and are living a happy life.”

However, recent information from the affected communities indicates otherwise. The herders have been protesting the authorities’ grazing land appropriation and forceful displacement for decades.

“Once we even visited the regional capital Urumchi, set up two Mongolian yurts on the city’s main square, and demanded the protection of our land until we were forcefully dispersed and expelled from the city,” another herder told SMHRIC.