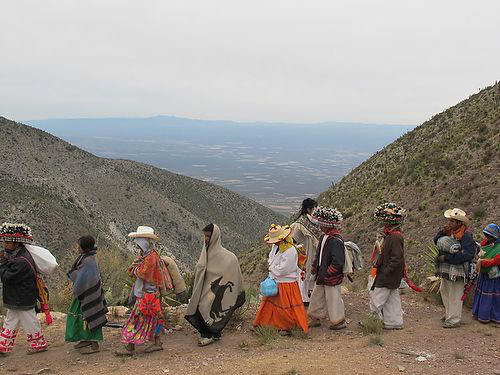 MEXICO CITY – It sounded too good to be true – and, indeed, it was.

The mining company First Majestic Silver was handing over its mining concessions in the sacred lands of Wirikuta, and the government was declaring 45,000 hectares a National Mining Reserve, which would be protected from exploitation. In a ceremony held Thursday at the National Museum of Anthropology, Bruno Ferrari, Secretary of the Economy, and Juan Rafael Elvira Quesada, Secretary of the Environment, announced the news in the company of a group of Wixarika people. The announcement came as the movement to protect Wirikuta geared up for its biggest event since the campaign for the sacred site’s defense began: Wirikuta Fest, where a star-spangled cast of Mexico’s most beloved recording artists will raise funds for sustainable development projects for the residents of Wirikuta.

The social media were on fire; messages circulated on Twitter and Facebook faster than you could refesh your screen: “Aho! Ganamos!” (Yes! We won!) and “Felicidades a los Huicholes!” By the afternoon, however, a different sort of tweet was flying about: “Wirikuta NO HA GANADO! (Wirikuta has not won!)

On Friday, in a hastily organized press conference, leaders of the Wirikuta Defense Front called the government announcement a fraud, designed to confuse the public and undermine the momentum and public support created by Wirikuta Fest. Besides the Wixarika authorities and experts from the Wirikuta Defense Front, Rubén Albarrán and Roco Pachuchote, two of Mexico’s most popular recording artists who are helping to organize Wirikuta Fest, spoke at the press conference. 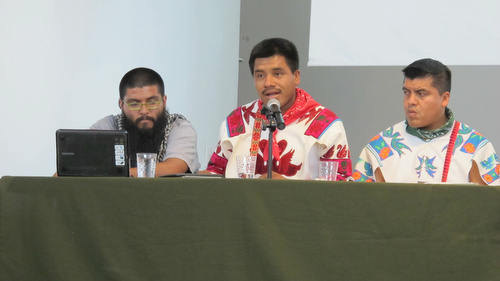 “They said Wirikuta is safe from danger, but it’s a lie; Wirikuta has been sold,” declared Felipe Serio Chino of the Wixarika Union of Ceremonial Centers. The concessions that First Majestic Silver turned over to the Wixarika people were the same 761 hectares they offered to a Wixarika delegation a year ago when they visited the company headquarters – and the delegation rejected the offer. That 761 acres includes the Cerro Quemado, which for the Wixarika people is the birthplace of the sun and the place where all life began. But Wirikuta comprises a vast network of sacred sites and a pilgrimage route that connects them, explained Serio Chino. The entire sacred territory of Wirikuta, which resides in the Chihuahua Desert of San Luis Potosí in northern Mexico, is 140,212 hectares. Aside from being one of the most sacred sites of the Wixarika people, it is one of the most desperately poor regions of the country.

Regarding the 45,000 hectares that the government has set aside as a National Mining Reserve, Santos de la Cruz of the Wixarika Regional Council further clarified the issue. “This surface is curiously in the zone where there are no concessions,” he said. The massive Universo mining project planned by Revolution Resources will not be affected, and the First Majestic project can continue as planned.

The selection for the 45,000 hectares were the result of a georeferentiation project conducted by the government agency responsible for indigenous affairs, the CDI, to determine precisely where the sacred sites were located. The results are not valid, De la Cruz emphasized, because they did not have the approval of the Wixarika people, who govern their affairs through a consensus process that involves the entire community. In this case, the community had not even been consulted about the government’s placement of their sacred sites. 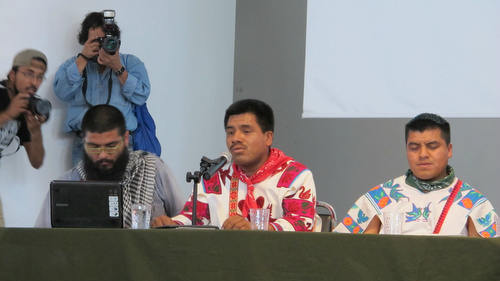 Albarrán, the iconic vocalist for the wildly popular Café Tacvba, lightened the mood with a few lines from the song composed for Wirikuta: “Wirikuta no se vende, Wirikuta se defiende (Wirikuta is not for sale, Wirikuta is to defend).

“Yesterday the news took us by surprise and we were almost celebrating,” said Albarrán, who is also one of the founders of the Aho Colectivo, formed by Mexican recording artists to raise awareness and funds for the Wixarika defense. “Then we realized that we were facing a media masquerade. Now the intention of the festival is to make the public aware of this farce. We continue on our path and with all the proposals for which the festival was created; there has been no change. These offers have already been made to the Wixarika people and they’re not interested. We continue with the activities in favor of the people of Wirikuta.” 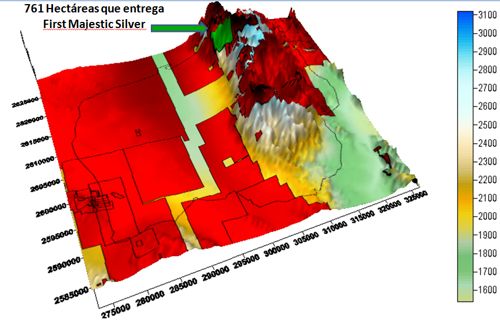 Tunuari Chávez, an environmental engineer with the Wirikuta Defense Front, displayed a map of Wirikuta that showed the mining concessons in red. The portion that First Majestic had donated to the Wixarika people is indicated in green – less than one percent of the 140,000 hectares that comprise Wirikuta. About 70 percent of Wirikuta has been concessioned to mining companies.

Today the organizers are scrambling to put the last touches on the long-awaited Wirikuta Fest, a mega-concert at the Sol Center that is drawing a full lineup of Mexican pop stars from Caifanes and Enrique Bunbury to Calle 13 and Julieta Venegas. The concert sold out at 60,000 and is expected to raise more than a million dollars for sustainable development projects benefiting the residents of Wirikuta.

For the full press release, and for more information about the movement to defend Wirikuta, see www.wirikutadefensefront.org, and follow them on Facebook and Twitter, @FDWirikuta, @Venadomestizo and hashtag #Wirikuta.

This article originally appeared at TheEsperanzaProject.org. Reposted here upon request.