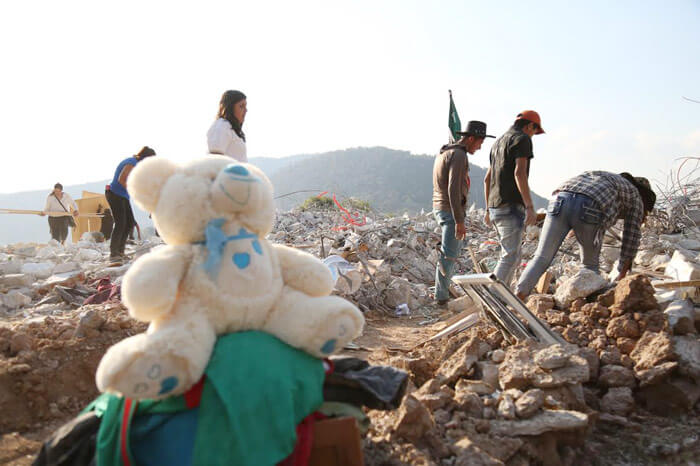 Only rubble remains of the structure known as ‘The Castle’. Photo by Francisco Cañedo, SinEmbargo
Support our journalism. Become a Patron!

In a single morning, the García family saw the destruction of everything they’d spent their whole lives working for. On April 11, 2016, representatives of Governor Eruviel Ávila Villegas, a member of the ruling political party PRI, (in Spanish, the acronym stands for Partido Revolucionario Institucional, or The Institutional Revolutionary Party) arrived in the Otomí community of San Francisco Xochicuautla in the municipality of Lerma. They came accompanied by 700 policemen. Without a judicial order, they planned to demolish the Garcias’ home.

That same day, heavy machinery belonging to hundreds of members of the Mexican Secretariat of Public Security destroyed the Camp of Peace and Dignified Resistance. This camp was created to halt the construction of the Naucalpan-Toluca motorway, commissioned by Constructora Teya, which is affiliated with the businessman Juan Armando Hinojosa’s Grupo Higa, one of the Mexican government’s most favoured businessmen. Hinojosa gained public notoriety during a scandal involving the white house he built for the country’s president and his wife. Hinojosa was also recently exposed in the Panama Papers scandal.

On July 9, 2015, President Enrique Peña Nieto signed a decree approving the expropriation of nearly 38 hectares owned by the Otomí town of San Francisco for the building of a private motorway in the name of “public interest”, despite the community’s opposition to the plan. Many locals see these works as a violation of their rights as an indigenous town, as they were not consulted about the project. The construction of the motorway, which would connect the Mexican capital Mexico City with Toluca, was approved in April 2007 and ever since then the community has fought against the plan, hoping for its revocation.

Without warning, a lifetime’s labour destroyed

At about 10:30 a.m. on April 11, the police formed a winding wall atop the hill where doctor Armando García lived (one of the three local authorities).

I’m here to ask for your support and solidarity. I want you to see how our government works. They are destroying my house, my home, my livelihood, without so much as a warning.

They did not give us time to take our belongings.

This is one of the many injustices committed by our government. By our bad government, I should say.

In this country, justice is only for those who have money. For the poor, there is no justice.

Selene Romero Gil, one of Dr. García’s relatives, said the following in an interview with SinEmbargo:

Four 4x4s came up, and we stayed in our house. Then we saw a machine arriving. I went up to the third floor and they started banging at the door. There was a lot of noise.

This place, where the majority of the residents work either as builders or farmers, was taken by surprise, meaning no one had a chance to help the community members who were hit the hardest.

“I was coming back from work at about 12:30 when I realised there was a lot of security about,” said Luis Antonio Baltazar Lucas, who is from the area. 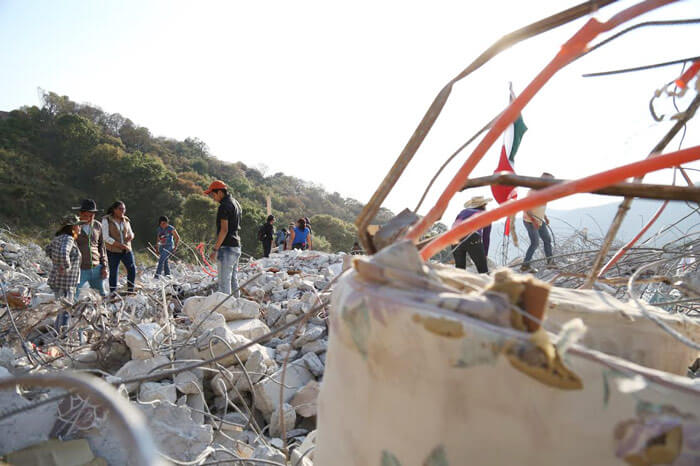 The town’s inhabitants claim that around 50 people were displaced by the State Police. Photo by SinEmbargo’s Francisco Canedo.

Between 40 and 50 people, children and the elderly among them, were displaced by force, according to witnesses.

“They came to provoke us. I was kicked by a policewoman,” said María Isabel Hernández García, a member of the local authority the Supreme Council. She can be seen crying for help in this video:

There was an error retrieving the YouTube video ID for the url you entered, please verify that the url is correct.

It’s not fair. Everything had been peaceful in this fight. We don’t have weapons, we don’t have anything. We just want to make an honest living.

The collapse of the building known by the locals as “The Castle” was slow.

They wouldn’t let us do anything while they were destroying it. Afterwards, they stopped in a chapel that was above the house [on hill above] and started throwing tear gas, making everyone run. 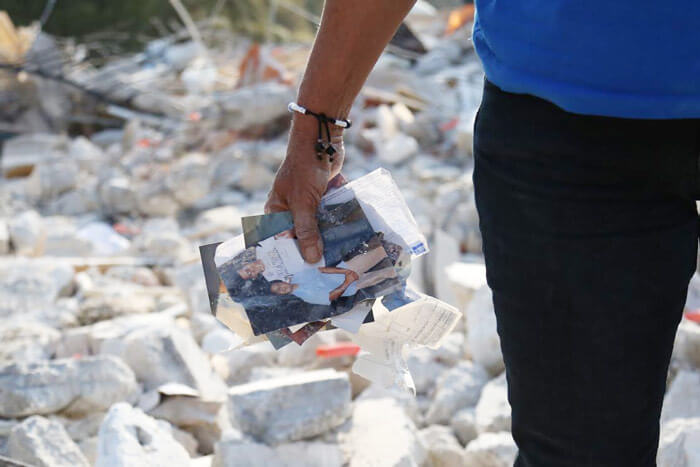 The citizens didn’t have a chance to rescue their belongings. Photo: Francisco Cañedo, SinEmbargo

It took the police’s machinery more than two hours to transform the countryside into nothing but rubble. The locals claim it was illegal, as they have recently won two acts of protection: one was from the Fifth District Judge in matters of Protection and Federal Judgements of the State of Mexico, who granted them the permanent suspension of the construction project. The other suspended the decree of expropriation.

According to locals, however, a man thought to be named Luis Enrique García, carrying only the decree of expropriation in his hands, led the demolition works nonetheless.

What about the National Human Rights Commission?

Sergio García, Armando’s brother, lamented the role played by the National Human Rights Commission, which had previously listened to the worries of a peaceful resistance group that has spent more than seven months fighting against the Autovan-Teya motorway, affiliated with Grupo Higa.

We alerted them, but no help arrived until many hours later.

The townspeople have pointed out that this is the fourth home that has been demolished, and that the last one was removed in July. However, in all of the previous cases they had decided to sell rather than to resist.

The threat to family assets that follows in the wake of the motorway, they say, has been ignored by the municipality’s authorities.

Sadly, the Institutional Revolutionary Party [PRI] and Peña Nieto are in power, and we’ve never had any support here. And last time, Mario Villavicencio, the ex-President of Communal Assets, supported the works here in the community behind the backs of the population.

After the withdrawal of the police at 5 p.m. sharp, locals and volunteers from Mexico City helped the affected families search for anything of value left among the rubble.

“We’re not going to leave. We’re going to continue with our peaceful resistance camp”, said Romero. Until now, the number of people resisting had reached anywhere between 20 and 50. Relatives say they’re hoping that a complaint to the Attorney General of Mexico will lead to reparations for the damages caused.

Civil, national and international organisations have all condemned these actions of “repression and displacement” committed against the population of San Francisco Xochicuautla and demanded that they respect the suspension of the works in the Otomí town.

In a statement, the organisations that make up the Front for Freedom of Expression and Social Protest (FLEPS) indicated:

These types of acts are not only serious violations of our rights to freedom of speech, assembly and protest; they also demonstrate a wider context of the repression of indigenous towns who are defending their rights against the imposition of these huge projects in Mexico, and the authorisation of legislation that permits them, like in the case of the law that regulates the use of public forces in Mexico, named the ‘Eruviel Law‘, enabling the use of force, even lethal force, in situations involving public protests.

You can keep up-to-date with developments and reactions to this displacement on Twitter, using the hashtag #AlertaXochicuautla.

This is an adaptation of two articles originally published in Spanish on SinEmbargo’s website: “The way they stamp on us is not fair, say Otomis who were displaced in Xochicuautla to make way for Higa” and “PRI wants us out, but they won’t get rid of us even with their tear gas, say the people of Xochicuautla“. These texts were reproduced at Global Voices under a collaborative agreement and republished under a Creative Commons License.